Fiordland is one of those exceptional places that is often raved about but remains relatively untouched due to its vast, hard-to-access country and coastline. So, naturally, Jordy Bardin jumps at any chance to return to Fiordland and experience the countless splendours of the wild south…

I am fortunate enough to know some incredible people, including three guys who pioneered various areas of Southland over 26 years as keen hunters, divers and adventurers. These three old mates now get flown into the bush every year and live off the land for a week or two, fully off the grid either on the mountain tops or down on the coast. I am lucky enough to have joined the team again this year in March, with the guys being satisfied with my seafood gathering on the last trip! After years of experience in the wild, you can imagine the endless stories and knowledge that these blokes carry, and it is truly priceless to listen and learn from them.

After travelling to Tuatapere (a little town on the edge of Fiordland’s wilderness) we meet with Dale at Heli My Way and loaded up the helicopter with all our gear (which is a lot for 10 days in the bush!). Flying over the Southland country is an experience in itself. The western Fiordland area consists of the famous inlets/fiords, but outside of the beautiful sounds lies an entirely different stunning landscape. The vast, mountainous land with large bodies of water nested in the valleys and endless rugged coastline is a sight to see!

Our first stop was a clearing high in the mountains and as we landed a stag and two hinds watched from the bush line, leaving me confident that venison would be on the menu that night. After setting up camp and venturing high up onto the surrounding ridges, however, the valleys were empty and no deer were seen or heard. As we had two days of stunning, hot weather and the roar had not begun here, the hunting was tough and there was to be no venison on the menu, but the breath-taking country really made up for it. The pictures just don’t capture the sheer size of it all. Standing on the peaks and trekking along the ridges makes you feel like you’re on top of the world, with nothing but mountains as far as you can see. This is nature at its purest. Kea screech as the sun sets and kiwi call to their mates throughout the night. Unfortunately our time on the tops had to come to an abrupt end as the weather was about to turn, so it was time to pack up camp and be flown down to the coast to bunker down for the storm.

Our next eight days would be spent at the same campsite which we made two years ago. It’s nestled just off the beach in a sheltered little bay right at the bottom of the South Island. Being familiar with the area, I knew there was great diving to be had within the entire bay and I was itching to get in the water before the storm hit for the next two days. After unloading the helicopter and saying farewell to Dale, the one tiny but very big annoyance of this place quickly arrived… the sandflies! They completely swarm you and will find any inch of skin left exposed, so getting in and out of my wetsuit was a fun a time as you can imagine. I didn’t let this slow me down, however, and went straight from the shore into the water to get my hands on some massive Southland crayfish! Sometimes the hard part is to find crays small enough to fit in the pot.

You don’t have to go far before feelers start to appear out from under the rocks. A lot of the time, you will even see them from the surface in as water as shallow as one metre! It is truly incredible to see such a sight and a dream for many divers. Some of the nests I found had too many individuals in them to count, but the real cray-zy thing about these South Island crayfish is the impressive size they grow to. These are the biggest crays I have ever seen, some estimated up to 5kg, and all grabbed in under 5m of water. Quite often I would either just photograph these big boys, or grab them gently for a photo before releasing them. Two or three smaller crays (which are still massive!) was plenty for dinner for the five of us so I spent most of my time filming and photographing. The lack of fishing pressure in these areas means that the crayfish are left alone to breed and grow to these impressive sizes. It also results in them being fairly friendly, with the bigger ones coming well out of their holes to greet you. I even cracked a kina open and watched a big buck (male crayfish) come stomping out into broad daylight and snatch the kina off the swarming wrasse – it even warded the fish off with its feelers. It then continued to use its fighting claws and feeding appendages to scoop the contents of the kina into its mouth. I was in heaven, happily spending hours in the water exploring the bay, my Beuchat wetsuit and gear keeping me toasty warm and comfortable. 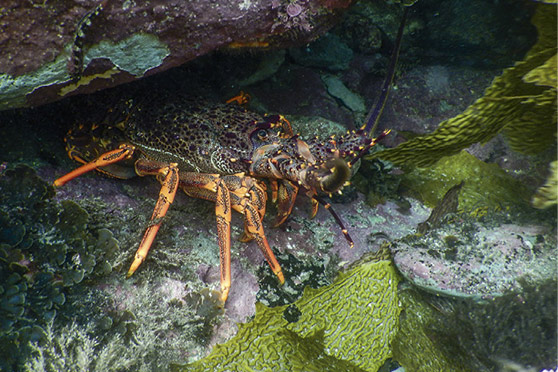 The main thing about these South Island crayfish is the impressive size they grow to.

It’s not just the crayfish that grow to impressive sizes in the cool, nutrient-rich water of Fiordland. The kina, paua, shellfish and reef fish all reach much larger sizes than I have seen up in the North Island of NZ. I was blown away by some of the massive butterfish I saw and the number of big blue moki which circled around me, all in just metres of water. We had a small speargun which I used to shoot some smaller specimens for dinner, but unfortunately no big blue cod occupy that particular bay. However (being a Northland diver), I spotted some interesting species including warehou, copper moki, juvenile kahawai and trevally, and quite a few longfin eels swimming in the open (yes, in saltwater!). These eels spawn in the tropical water of the South Pacific and die after spawning, so these very large individuals that I came across may have been almost ready to leave on their final journey out to sea. And by large I mean almost as long as me!

The weather down here is highly unpredictable and can go from one extreme to the next very fast. Within our eight days on the coast, we experienced a couple of days of thunderstorms as well as blue skies and summer conditions. The entrance to our bay blocks a lot of the bad seas/swells from coming in; however, nothing could stop the 7m swells from stirring up our little bay. The heavy rain and thick tannin in the creeks also drained into the bay and created a layer of hazy, brown freshwater on top of the saltwater. This is common in Fiordland and occurs most often within the fiords due to the high rainfall and steep landscape. Our last day also brought 30 knot southerly winds and horizontal rain, which fortunately dropped off enough for the helicopter to fly in. A 30 minute ride later and we were out of the wilderness and back into civilisation, as well as blue skies and no wind! Southland really has it all!

Living off the land

A trip into the wilderness isn’t for everyone. You have got to do the right planning and have the necessary gear, as well as be physically and mentally prepared. There is no electricity, no reception, and no one else except you and your crew to rely on. But there is something incredible about being fully immersed in nature for an extended amount of time. It resets our body clocks, it pushes our bodies and minds and it brings us back to our roots and strong connection with nature. The wild south is an extreme place to do this, which is why trips like these really quench my thirst for adventure… at least until the next one!