The west coast is a place Editor Grant Dixon holds dear to his heart. In this feature he explains why, and recounts a couple of recent visits to his old stomping ground…

They tell me my first fishing experience was on the west coast at Kawhia, where my parents took me, snuggled up in my bassinet as a six-week old ‘bundle of joy’, for my ‘first’ fishing trip.

Close on sixty summers have passed since that first trip aboard the family’s 4.9m (16’) Augustin cabin boat – the Jan Shiree – and the west coast has featured prominently in fishing and diving adventures over the years since.

In the early days, our holiday home on the hill above the rowing club played a big part in our upbringing. This wonderful base camp saw us embark on a wide range of activities that remain etched in my memory banks, including: fishing off the wharf and jetty; chasing snapper over the sand flats and in the channels; gathering cockles and scallops (one special bed remained a closely-guarded secret); netting and spearing flounder; whitebaiting with a scoop net and a lantern (I’m not sure that was entirely kosher!); walking across the hills at Te Maika to get mussels off the rocks; trolling Smiths plastic jigs for kahawai … the list goes on.

As we grew into our late teens, the family boat got bigger and we ventured out over the bar, diving and fishing the likes of Albatross Point, Aotea Reef, south to Tirau Point and, eventually, Gannet Island.

Moving to Auckland to take on my current role with NZ Fishing News saw the trips out west become less frequent, but the memories remained of large and plentiful snapper and crusty big bugs. Regardless of how far I ‘strayed’ away from my fishing roots, there was always a hankering to return, with any opportunities to do so always cherished. So when offered two chances recently, both out of the nearby Raglan Harbour, I was quick to accept.

First up, Ross Christensen was keen to get me in one of his Fish City 510 Cuddy trailerboats, and friend Geoff Peake asked me to join him and his fishing buddy Phil to fish the Raglan Club’s Icebreaker Contest.

Unfortunately, both were initially postponed due to the weather – the run of westerlies had kept the boats in port most days through the month – but we eventually saw our opportunity the first week of December.

The Wednesday looked the best option – and so it proved to be, being relatively calm with a forecast for 10 knots of SW early in the day.

Ross rocked up with the FC510, resplendent in its orange and black livery, and we launched at Manu Bay.

I have less-than-fond recollections of launching and retrieving boats here, as the ramp is susceptible to the westerly swell. Today, however, the sea was benign and we launched without incident, before heading due west to the 50-60 metre mark.

Fishing on the west coast is ‘different’ from the east, even though the main recreational target species, snapper, is the same. For a start, there is not much structure offshore, so when given directions as to where to find the fish, they tend to be in metre depths rather than more specific areas (i.e. ‘go to the 45-metre mark’).

Then, having done as instructed, you cruise around in the boat until good sign shows on the sounder, the anchor is lowered, followed soon after by your ledger rig, and you’re fishing.

Drifting baits and deploying the latest slow-jigs and other trendy stuff doesn’t seem to work as well as it does out east.

Ross and I headed to the 60-metre mark, the FC510 dealing comfortably with the 10-12 knot chop, the impressively soft ride no doubt aided by its interesting ballast system. While a conventional flood chamber runs along the length of the keel, what makes the FC510’s different is that the water can be held up forward with a simple valve system. This adds weight to the boat where it’s most needed when heading into sloppy conditions. It certainly worked a treat.

A variable deadrise, which starts with a fine entry at the bow and runs out to 18 degrees at the transom, adds to the boat’s sea-keeping ability, while the reversed chine turns the spray down nicely. In short, it was a comfortable, dry ride, both into the chop and when heading ‘downhill’ on the way back in.

Upon getting to our marks, there was reasonable amount of sign on the Raymarine sounder, so the pick was dropped. Sure enough, it did not take long for the action to start, with my Snapper Snatcher, baited with skipjack, being hit soon after – the first of many snapper to fall victim to the rig. Meantime, Ross was hauling them in, too, resulting in a bin of great eating fish to around 3.5kg ‘heading back over the hill’ to be enjoyed by friends and family.

What made the day even more enjoyable was the FC510’s fishability. Being beamy for its length, it’s a particularly stable platform. Neither Ross nor I are lightweights (think flanker and front row forward!), yet when it was necessary for both of us to be on one side to net fish, we always felt secure.

The wide gunwales are also a plus when fishing, making them great to sit on or lean against when playing fish. Positive buoyancy is achieved with foam-filled gunwales and flotation under-floor.

Owner James Carran has put a great deal of thought into the boat, adding a decent Raymarine sounder-chartplotter with side scan. The SAV drum anchoring system means the ground tackle can be deployed or retrieved with the flick of a switch on the helm.

James has opted for a Mercury 75hp four-stroke which runs on the ‘smell of an oily rag’. On the way out we were running into 1.5m swells and choppy seas, which saw Ross on and off the throttle to counter. We ended up doing over 30 nautical miles, but only used one 25-litre tote tank of gas for the entire trip!

The other neat feature of the FC510 is the ‘no pump’ live-bait tank – essentially a flood chamber in the rear centre of the boat beneath the water line. Undo the bung and the water floods in and out, refreshing it, and when underway the bung is put back in to hold the water level.

On our day out we used the tank to revive smaller fish suffering from barotrauma. While they would only lie on the surface if released immediately, an hour in the tank saw them equalise, and when eventually released, they swam off strongly.

However, while it works well in the short term, the flood-chamber concept does have drawbacks for anyone wanting to keep baits alive when moving any real distance. Consequently, some owners are asking for a venturi pick-up to keep the water flowing when on the plane – and a lid is another option to stop the water slopping around when underway.

All in all we had a great day, solving all the world’s problems (the marine industry’s in particular!) as we sat chatting. It was a pleasant trip to reacquaint myself with my west coast roots.

The second opportunity came just three days later with Geoff Peake and Phil Swney, with Geoff asking me to bring along some slow-jigs to have a play with – apparently they ‘don’t work’ on the west coast…

With day one of the Raglan Club’s Icebreaker cancelled due to the rough conditions, MetVuw and Swellmap were both predicting Saturday would be a ‘cracker’ – and neither weather site was wrong.

This saw the wind petering out to leave glassy-calm conditions as we traversed the bar with Geoff at the helm of his Seaforce 600, heading SW this time to around the same depth.

Again, we were to enjoy a hot bite, made all that much more ‘exciting’ by the arrival of a pack of blue sharks. But they weren’t interested in our fish – rather it was our baits and the outboard motor that grabbed their attention, constantly nuzzling the latter with their snouts.

Then, with good fish already in the bin, I put away the ledger rig and dropped a Halco 80g Outcast jig down instead, yo-yoing it around a bit – and hooking up almost immediately. Not a big fish, but the exercise was repeated several times with the same result. Who says you have to be on the move to catch fish with jigs?

By this time a dozen nice fish were in the bin, including a lovely specimen of 8.1kg for Geoff (destined to finish second in the comp’s weigh-in later that day), before the bite slowed, we upped anchor, and went for a drift. Despite finding good sign and running through it with a range of jigs and soft-baits though, we caught only gurnard. So perhaps the pundits were right after all!

Returning to our original possie, it was back into the snapper. Here Geoff developed a technique where he would let his inchiku jig sit on the floor for a short while, then gave it a quick flick upwards – and it was nailed almost every time. Very interesting!

We ended up with 22 snapper, three kahawai, two gurnard and a trevally for the day between us, having also released countless ‘keepers’.

Then it was down to the prize-giving, where our good fortune continued with podium finishes in the snapper and kahawai sections, as well as a ‘lucky angler’ prize and meat-raffle draw!

It had been a great day – a great week in fact. You gotta love that west coast. 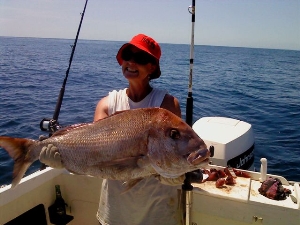