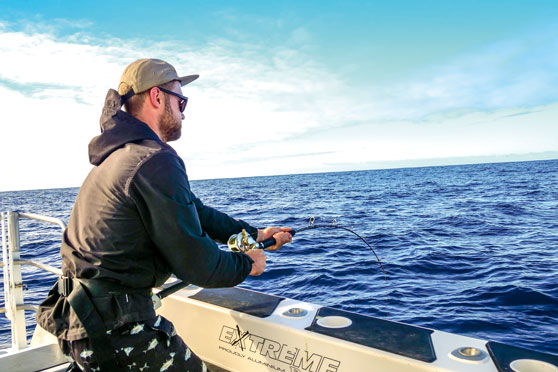 Located 30nm northwest of Cape Reinga, the Three Kings Islands were given their European name by Abel Tasman who anchored there in search of fresh water. They are a series of rugged, rocky islands and outcrops – so rugged that the two ‘anchorages’ are merely indentations along the cliff and boulder fall shoreline, exposed to oceanic swells and currents. A few hardy souls lived on the island in pre-European times; anecdotally they were veritable giants, no doubt thriving on a diet rich in Omega 3!

I had been to the islands before as a deckie on Pursuit and it’s fair to say I had a ball just witnessing the scenery and the fishing action, but I was excited to partake in some angling this time. As you can imagine, new gear had been slowly accumulating for months in preparation for every imaginable fishing scenario. The last week of April came around and the weather gods were on board with us as we departed Houhora wharf at 6:00 am in glassy conditions.

It didn’t take long to clear North Cape on our fair vessel Midnight Express, a 9.85m custom Extreme that hums along on a 330hp Volvo. Pretty soon our eagle-eyed friend Tom Bilkey spotted a school of saury jumping out of the water. Pulling a quick u-turn, we closed the gap and saw two large splashes dead ahead. We were still in the process of setting our second lure when the first lure – an old Broadbill chugger – was engulfed by a flying barrel. TUNA!

George Bourke, being the quickest ginger north of the Bombay Hills, grabbed the rod and we settled into the fight. Twenty minutes of doughnuts ensued before we could make out some yellow sickles down deep. The end game went smoothly and before we knew it there was a gorgeous estimated 50kg yellowfin tuna on the deck – welcome to the Far North, boys! 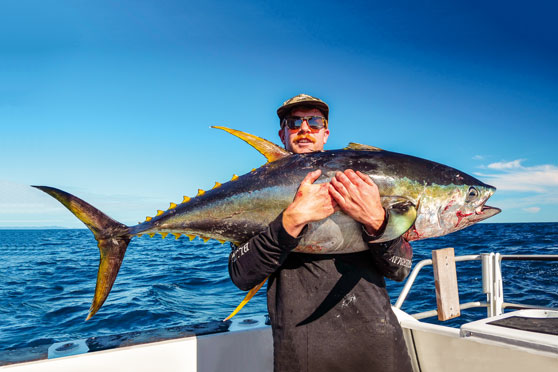 The full spread was set this time and we began working the tasty-looking contour lines spread all over the chart. Just north of an area called ‘The Hook’ we had a triple-strike of striped marlin – although one was fervently attacking the small skipjack lure on the bungee, so it was no surprise that only two remained attached once the gear was cleared!

The sight of two stick-faces grey-hounding in opposite directions was quite a sight to behold for a bunch of Hauraki Gulf snapper and kingfish enthusiasts, and no doubt we did something wrong as the two fish attached quickly became one. Tom was the lucky angler still hooked up, and he did a good job of closing the gap with some handy boat work from yours truly. 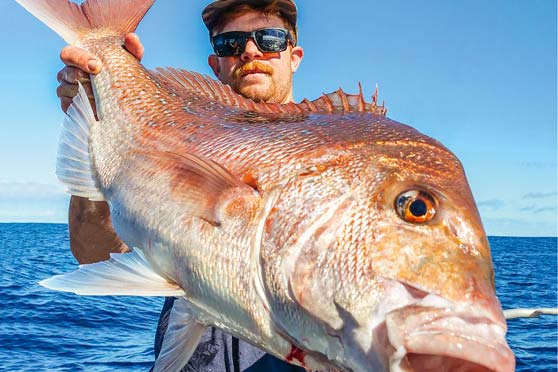 George was just reaching for the wind-on leader when the line went slack. The Pakula Dojo hook had opened up even though the drag was set lightly – hard luck, but we were thrilled with the action anyway.

Late on that first day we had a blue marlin check out our long corner lure, and Hauraki Express owner Pete Bourke masterfully fed the lure back into its gob – another hook-up! Alas, this fish fell off shortly thereafter and we were left licking our wounds once again.

Pulling into Northwest Bay, we reflected on our action-packed day as we caught a few jack mackerel and squid into the night.

With the gamefish biting and Pete having a full schedule of golf awaiting him back in civilisation, we decided to concentrate our efforts the next day pulling lures or live-baiting for gamefish back towards North Cape. It was a frustrating day with a handful of lazy marlin strikes without any hookups, although the same small bungee lure came back in at the end of the day with both hooks broken off. It left us thinking we should’ve game-rigged that plucky little bugger! 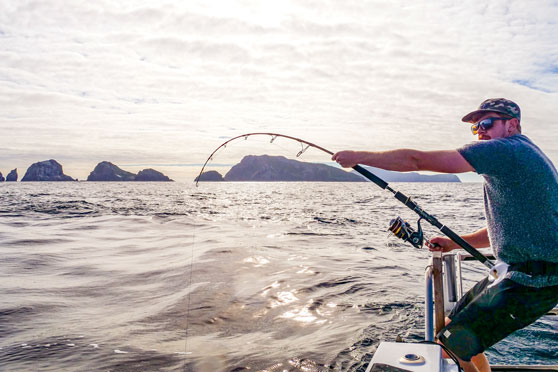 Our luck continued to run out as we drained the diesel pump dry at Houhora wharf the next morning and picked up the water sitting at the bottom of their tank. A few swear words, a bled fuel tank, some new filters, and a wasted day of five-knot variable wind conditions later, we were back out there. Fair to say we won’t be using that wharf for re-fuelling next time around.

Unfortunately, the gamefish kept their heads down for the next couple of days, even with some swordfish drops and koheru live-baiting thrown in for good measure. We thoroughly enjoyed catching the koheru early in the morning by the anchorage. The gear required is super light – tiny hooks attached to 10lb fluorocarbon leader – and these minisportfish make a good account of themselves.

When you start berleying, the blue and pink maomao show up first, followed by koheru darting around the surface and big trevally lurking deeper. The aquarium is complemented by the occasional kingfish cruising through to add some spice to proceedings. When trevally are hooked on the koheru rigs, it normally only lasts for a few seconds: whizzzzzzzzzzzzzz goes the reel, followed by an “Oh!” as you are busted off! In fact, the only noteworthy fish I caught the whole trip was a hump-headed trevally on the koheru gear, although you won’t see it here because George forgot to focus his camera. 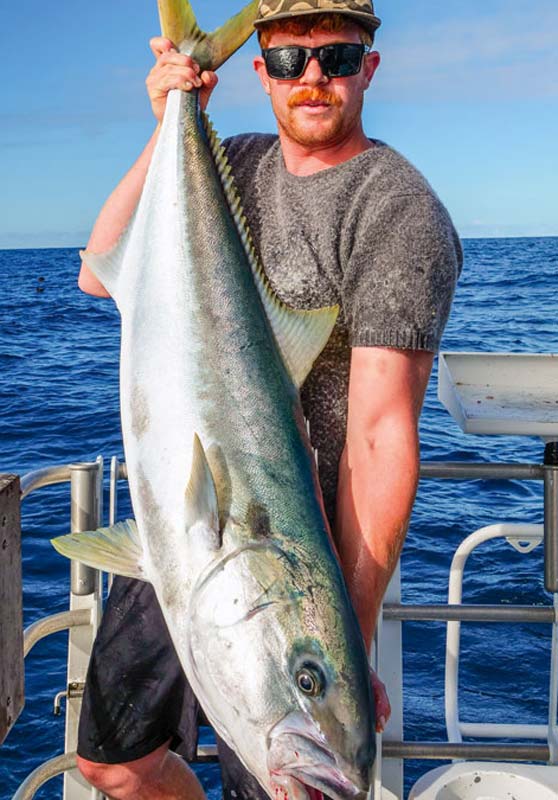 The highlight of our second excursion was live-baiting the freshly caught koheru around the Princes Islands for kingfish. The scenery is superb, and we enjoyed catching numerous kings around the 20kg mark. We lost a biggie when the hook pulled during a dour 15-minute scrap. Given the other fish took no longer than a few minutes to bring in, we are thinking that one was a real hog. The only good thing about losing big fish is that we have the perfect excuse to get back up there again next year – revenge!