Softbait Fishing In The Far North Of New Zealand Writer Mark Kitteridge goes through some highs and lows while on a soft-baiting mission in the exciting Far North...

The primary purpose of our trip to the Far North was to photograph, video and test the new Ocean Angler Megawave soft-bait rod. I had spent a fair bit of time designing this rod, and was keen to see how it would handle the numerous Far North snapper and kingfish, which range right up to fair-dinkum monsters.

We started our day early, launching the boat at the Houhora Big Game & Sport Fishing Club ramp with the sun yet to threaten the horizon. The sea was still black and oily calm as we trundled our way down the harbour, weaving between the navigation buoys.

I’m used to how Paul fishes now. I know he finds the furthest destinations irresistible (a nautical version of the ‘grass is always greener’) and upon getting there, we won’t stick at anything for long unless the fishing’s full on. However, I was still taken aback when, after a curving coastline that stretched to the horizon revealed itself, the furthest point indistinct and hazy, Paul said:

I thought he was joking; it looked like a couple of hours travelling to me. But distances can be deceptive out in the open. Despite hugging the coastline (“I don’t like going straight across in a small boat like this with no help nearby”), we got there in an hour travelling at 27 knots. On a less positive note, the wind was slowly getting up, making Paul’s chosen Spot X a bit borderline for fishing effectively – the waves were rearing up, sweeping in over the shallows and crashing over the rocky coastline.

“I still want to do it mate – my brother and I got some amazing fish here! Try to cast your ‘bait into that bubble line around 20 metres out from the shore.”

Sure enough, upon whipping the lures out, a mix of 7” Z-mans in Motor Oil, Bruised Banana and Nuked Pilchard, we enjoyed some smashing takes. There’s nothing like feeling a solid ‘thud’ transmitting through your rod, even when the braid is completely slack – a signal that it’s time to wind fast and pull that hook home!

I was lucky enough to catch three particularly nice snapper amongst a bunch of smaller fish over the short but hectic session, including a lovely fish around eight kilos. As it was very shallow, all were successfully released after a super-quick photo session; we’d leave catching take-home fish till the following day, so the catch would be as fresh as possible.

Eventually, after failing to catch anything for 10 minutes and with the conditions continuing to deteriorate, Paul made the call to start heading back, fishing along the way. And it wasn’t a bad decision, as we found action in most of the places we stopped to sample, but the snapper were smaller on average – just 1.5-4kg (Far North ‘pannies’!). We also hooked the occasional rat kingfish, big kahawai and even a decent porae for Paul.

Then he decided we should try the Parengarenga shallows to the north of the harbour entrance, a large area dotted with weed beds interspersed with sandy patches in 10 metres of water. Time to try out my one and only remaining 7” Fusilier. On Paul’s previous trip it had been the standout lure – so much so that he’d retained two thirds of his last ripped-up and smashed lure, just in case. Taking pity on him, I’d given him a new one and kept the remaining two for myself. On the first cast earlier that morning it had attracted a 3kg snapper, but on the second, a bloody barracouta bit it off and took it home as a souvenir.

This was the perfect occasion to put the last survivor to use. The first cast brought nothing, but on the second I felt a solid thump during the descent, and upon hooking up I knew it was a beauty straight away. Powerful tail beats transmitted through to my wrenched-over rod, before braid began spewing from the little Daiwa Certate’s spool at a scary pace – I have honestly never heard so much line come off so quickly. Could drag systems melt?

“Mate, we have to chase this – it’s big!”. But Paul had other priorities.

“We have to go NOW – I’m going to get busted off any second!”

It felt like forever, but was probably just 40-50 seconds before Paul got the camera sorted and the boat heading after the unknown beast, filming at the same time. Fortunately, the centre console layout of the boat was great to work around, enabling skipper and angler the best possible chance of success, despite the obvious handicaps. Already I could see thick strands of broken off weed heading up the line, indicating my quarry had been down amongst the submarine jungle, trying to rid itself of the small hook.

Somehow the line stayed intact, and eventually I was amazed to find we were drifting over sand in 14-17 metres, with just the odd bit of light foul showing on the fish-finder. It was still far from over though. When the fish wasn’t pulling out line, I was trying to get line back on the reel, my fingertips holding the spool on each uplift for maximum pressure. The rod was scarily maxed out during the fight, and because it’s never had such a big fish on before, I had no idea whether it would stay intact or fly to bits. To its credit, the Megawave took everything dished out over the ensuing hour, but I couldn’t say the same for my body – my lower vertebrae felt as if they were crumbling into soggy sawdust.

Meanwhile, Paul kept filming and said, “Hey, mate, there are 250 people watching you now. No pressure. Can you make your way round to the other side of the boat and come down a bit to get in shot? Then we’ll be able to see your face and you can talk to everyone watching.”

My reply was rather terse: “No, I bloody can’t!”

Everything remained at max pressure and I wondered if my loop knot was slowly wearing out from all the weight; it was only 20lb. That’s always the balancing act: do you take your time and fight the fish within safe parameters so the gear copes better, but perhaps attracting sharks or slowly wearing out? Or do you go hard and sort the conclusion out – one way or another –more quickly? I opted for choice two. The fight continued for almost an hour, but finally I could see deep colour, and lots of it – a big kingfish! 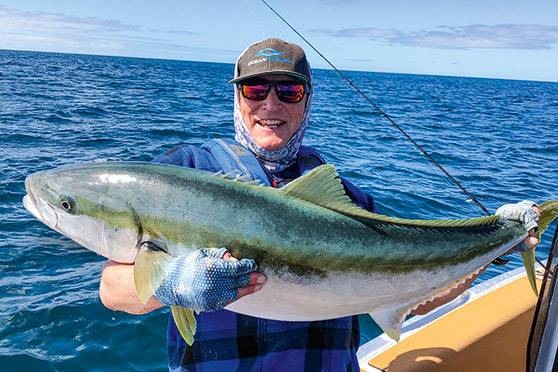 Now for the next hurdle – how to land it, as there was no gaff. Paul only had a rather pathetic net on board – the big snapper I’d caught earlier had filled it right up, its tail flopping out one end and the frame bending worryingly under the load. I suggested grabbing this fish by the tail.

Finally the beast was up on the surface and the result was out of my hands. Paul did some worrying things with the net before using it to stop the fish from going forward so he could grab it by the tail. Amazingly, this worked out well, and it was soon on board being placed in my disbelieving arms.

It was heavy but I couldn’t gauge the weight because my arms were so tired. The adrenaline allowed me to hold the fish up for the long suffering viewers, many of whom had watched from start to finish, and just a couple of pics, before gratefully sliding the fish back into the water. It was wonderful to see how strongly it still swam off after all that time.

It was a pretty self-satisfied and euphoric Mark Kitteridge who gratefully lay down to sleep later that night, and upon waking up the next morning, I must admit to thinking how good I was getting at this fishing lark. I couldn’t wait to get out again and see what the new day would bring. (Oh, dear!)

This time we were joined by young ‘William the Fishing Kid’, a 14-year-old youngster who has impressed the Ocean Angler contributors’ team in recent times. He’s virtually a fixture down at Houhora Wharf, where he mostly catches a mixture of kingfish, kahawai and john dory. William’s also notable for his strikingly blonde, curly hair. It might be hard to believe now, but I’d had a similar head of hair up until around 20 years ago, and I’d been a fanatical wharf rat till my early twenties, too. It was inevitable comparisons would be drawn: the old bull and the young bull… "Yip." William 'The Fishing Kid' in the process of bringing the writer down from his lofty pedestal.

Again we headed for the North Cape, but conditions were definitely not as good, so we settled on a more sheltered area near Parengarenga. I cast out for the first time and saw my line jerk around as my lure was sinking, signalling a biting snapper. Lifting the rod I set the hook on a decent fish, and couldn’t help feeling pretty smug when William said in amazement: “Wow! He’s hooked up already!”

I should have made the most of that moment. For the next 45 minutes it was nearly all William. Using a very light quarter-ounce Lightbulb jighead in the 10m depths, he caught the next four or five fish, including the biggest snapper of the day. It’s interesting how you can go from feeling like a king one moment, to suddenly struggling for credibility the next. I dreaded hearing his “Yip!” ringing out after a while, and if he hadn’t been smashed off by a big kingfish, I may have suffered even more. As the day progressed and got windier, I did redeem myself somewhat, catching good numbers of snapper and another decent kingfish, but there was no doubt who was the winner on the day. Well done, William!

His dad was at the wharf when we arrived back just after midday, and I could only do my best to smile graciously, when William said, “Dad, I kicked Mark Kitteridge’s butt!”