Shane Hartstone recently purchased a portable inflatable boat which disassembles to fit in the back of his utility. As he travels around the upper North Island with his work as a tackle rep, he gets to fish various local hotspots. This time he is based out of Whatuwhiwhi in the Far North…

Who doesn’t love the Far North? It screams “big” snapper! Sandy beaches, rocky ledges, low lying foul, it has everything that these snapper need, and more importantly, everything that a snapper fisherman needs.

My first ‘sneak away from work’ expedition on Nut’s Duck, my recently acquired True Kit Discovery portable boat, was a massive 450km from my home in Hamilton. I left home on Monday morning, working my way north, keeping a close eye on the weather. I was aiming for a Wednesday evening fish, so I closely monitored several weather apps, and all were indicating a light NW wind. It was hard to concentrate on work as my mind was on fishing, but as I finished my last call in Kaitaia, I was all smiles heading for Doubtless Bay.

Whatuwhiwhi, at the top of Doubtless Bay, provided me with great beach launching, shelter if the wind got up, and accommodation at the Top 10 Holiday Park. I had never driven up the Karikari Peninsula before this trip, so I called in to see Kieron from Reel Rods to grab some bait and a hot tip about where the snapper were hiding. I continued my drive up to Whatuwhiwhi Top 10 Holiday Park and could tell by the number of boats on campsites that this was a very popular fishing destination. After checking in and pitching my tent (with spectacular views of the bay), I headed to the beach for launching. The sand proved to be nice and hard, but the entrance from the road looked a bit dodgy with plenty of soft fluffy sand.

I have now got the assembly and inflation time for the boat from the truck to water to around 15 minutes. This includes talking to a few intrigued holidaymakers about my little red pocket rocket. When all set up, I called in a trip report to Far North radio before heading for the calm waters of the bay. The fold-down boat wheels made the launch a breeze, and the Mercury fired into life first pull. I steamed off about a mile up the coast and stopped to take in the serenity and reflect how lucky we are to live in such a beautiful country. 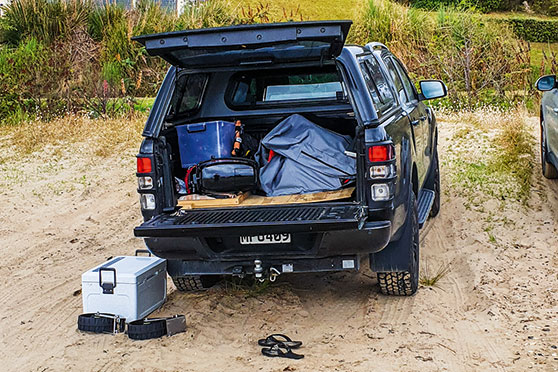 A four-wheel-drive vehicle and a portable boat provide access to some great fishing opportunities.

It was about now that I realised in horror that I was missing one of the two fishing rods I had started the trip with only a few minutes before. I must not have tightened the rod holder mount on the transom correctly, and it was now pointing toward the water minus a soft bait rod. I can only assume the beachgoers saw this happening and had a good chuckle to themselves. I still had my bait rod (just), so I secured it with the rod leash, something I should have done before leaving the beach. My second rookie mistake came moments later when I realised that I didn’t bring my landing net, which must have been lost somewhere between here and my last fishing trip a few days earlier.

No net was going to make landing bigger snapper an issue, as the sharp spines can play havoc with inflatable boats, so I changed plans to target pannies over the sand, instead of moochers over the foul.

As Kieron suggested, I set up a drift along the beach in around 10 metres of water. It didn’t take long for a nice snapper to scoff my pillie. As I clicked the bait runner into gear to set the hook, the snapper started to tow the front of the boat around! This turned out to be a 40cm snapper, so I can’t wait to land a proper one! When the snapper was puffed and boat side, I took a wrap of the trace and lifted it into the fish bin at my feet, being mindful of the sharp spines. A quick iki, and it went into the ice bin I use for a seat. So pleased I was with myself, that I momentarily forgot about the lost rod! 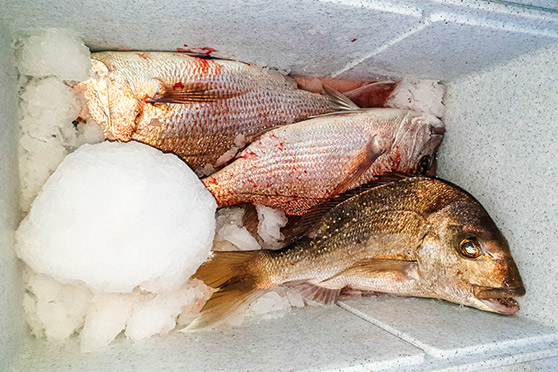 Dinner is taken care of - a nice bin of snapper caught over the sand in Doubtless Bay.

Over the next few hours, I put some nice eating-sized fish in the bin while soaking up the environment and appreciating just how quiet a small inflatable boat is on the water. The snapper were nice and fat due to the abundance of food in the area. A few other boats were out on the water, and we all headed for the beach as darkness approached. I deflated the boat and packed everything (yes everything) into the truck, including a few kilograms of sticky sand. My exit from the beach had to be delayed 20 minutes as a 2WD car towing a boat got stuck in the soft sand at the road entrance and had to be rescued by a friendly local with his tractor. It is a daily occurrence, so needless to say I made sure I had plenty of momentum when I went through (my 4WD Ranger made it through effortlessly).

The Karikari Peninsula proved to be an excellent destination for pack-away boat fishing. It also gives angler’s the option of heading out to the ‘other side’ at Rangiputa, something to savour on another trip north. I will be back here, with a new soft-bait rod and net, and will try to get one of those famous big Northland moocher snapper!