Landbased Fishing In The Far North 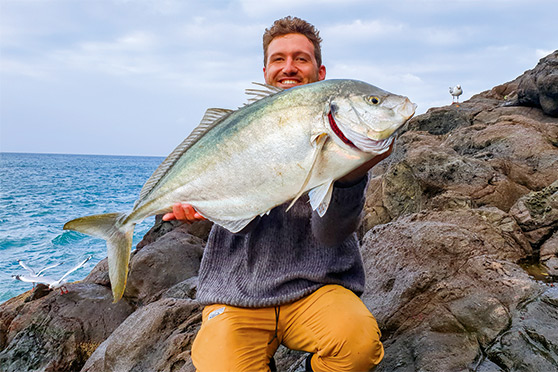 It’s always a risk locking in a fishing trip well in advance, and Nick Jones had booked a bach in the Far North for six nights. But when the time rolled around the forecast was appalling!

At the time I thought we’d be graced with a weather window over the week-long period, and, regardless, the Far North offers a variety of coastline facing different directions. Lo and behold, when the trip came around the forecast was a shocker: days of 20-knot winds, a decent northeast swell wrapping around the top coast and a persistent southwest swell rolling into the west coast. This meant crossing the Parengarenga Harbour entrance was a no-go, the wind would be extremely unpleasant over much of the flat harbour and beach launching at either Tapotupotu or 90-Mile was off-limits.

To add insult to injury, most of my previously confirmed crew had ditched me – the spineless chaps opting for calmer pastures in the Bay of Plenty at the last minute. I couldn’t really blame them, but I was still going to try and make some lemonade from the lemons thrown at me. Luckily, my good mate Grant Fale was up to the task. We planned to go ‘old school’ – trekking into landbased spots as we used to over a decade ago.

The first day saw us leaving the ute before sunrise, weighed down by packs laden with bait, berley and topwater, live-baiting and straylining gear. The anticipation of a new, unknown area kept us going, and we eventually scoped out a nice-looking ledge. The swell was surging onto the rocks, but it was definitely fishable, so we set up the gear. Within minutes of deploying the berley, we had a pack of kahawai zipping around at our feet. We nabbed a few ‘wais, flung one out under a balloon and checked the other couple into a short-term vacancy in a nearby rockpool. With Grant manning the livebait, I rigged up a stickbait and started working the area. It quickly became apparent that bigger lures would be best as there were suicidal kahawai in all directions. After 30 minutes we had some interest on the livie, although it turned out to be a shark – our poor kahawai had lost plenty of weight upon its return to the ledge. The villains were soon sighted in the berley trail – a posse of school sharks. 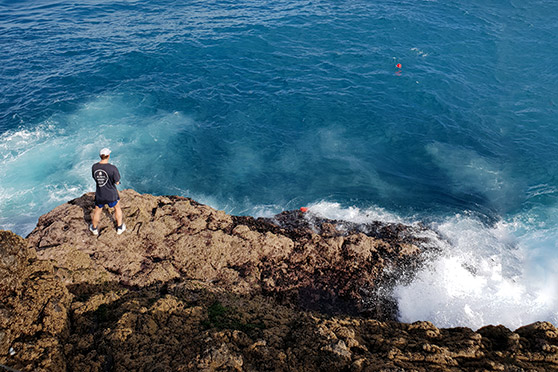 Soaking a live kahawai from a juicy ledge.

Although this ledge looked pretty juicy, our efforts over the next two hours were only rewarded with more sharks, many more kahawai and zero kingfish sightings. We made the tough call to check out another headland. This spot had less current but deeper water, and on my fourth cast of the stickbait, a solid kingfish around the 20kg mark charged in right at the rocks and took a swipe at my lure. Casting again, my offering was attacked by a pesky kahawai – Murphy’s law! Over the next half-hour, I saw two more kingfish and was briefly attached to one before pulling the hooks. With the tide now threatening to cut off our access around the base of the cliffs we had to call it a day.

Although we hadn’t put any runs on the board, we’d done some good reconnaissance and sighted some chunky kings. Therefore, it was a relatively easy call to hike back into the same area the next day. Our game plan was to be very judicious with the berley in an attempt to avoid the sharks. Once again, catching kahawai was a breeze, and we started the day by chucking one livebait out while tossing the stickbait around the foaming white water edges. It was another slow morning until Grant spotted a big greenback cruising the wash zone. I cast in front of his path and worked the lure back through the whitewater, trying to work it slowly knowing the poor visibility could result in a clumsy strike. And a clumsy strike it sure was – the stocky king headbutted the Maria Rapido stickbait three metres into the air while making a very audible gulping sound! It came back for a nosey once gravity returned the lure to the surface, but frustratingly it seemed these kings would only strike a lure once. 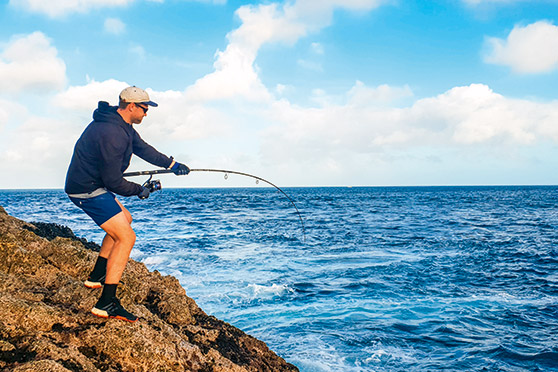 Putting the hurt on a kingfish.

Later, after yet another missed strike, I began to doubt my topwater technique. Just before I could make a change, however, I finally got a hook-up. Being a modest-sized fish, the Daiwa Saltiga set made short work of it, and I quickly had the fish below me. A big dark shape materialised next to the hooked fish – a shark? No, it had a huge yellow tail! Quickly landing, photographing and releasing the now very small looking king, we deployed a live kahawai and continued casting the stickbait. The big brute showed some interest but not enough to get a solid bite, and he eventually cruised off. It was a bittersweet moment – I was stoked to catch a topwater kingfish from the stones, but I couldn’t get the image of this green-backed tank out of my head. I asked Grant, who hasn’t done heaps of fishing, how much he thought this tease of a fish weighed. “I don’t know bro, but it was [email protected]*#ing huge!”.

Again, the tide was rising, so we set off on our big trudge back to the ute, swapping theories about what went well, what didn’t, and what might work better next time. The beers sure tasted sweet that night at the bach, and with just a half-day of fishing left before we had to return to the big smoke, we prepared ourselves for an early start.

We’d lined up a new spot as the swell had dropped considerably – and what a move it turned out to be. Upon arriving at the bricks, we had the berley in no longer than a few minutes before big trevally were spotted cruising through. Weeding out a few catch and release kahawai, we started hooking the big silver platters on small unweighted chunks of pilchard. It was outrageous trevally fishing for the next hour, fishing with the leader at the end of our rod tips and picking out which fish we’d like to catch. We must have caught 15-odd big trevs, releasing most but keeping a few for sashimi and kokoda dishes back at home. Other points of note included a nice kingfish cruising through and a 15lb snapper chomping down on our berley bag and swimming away with it! Time had flown by, and regrettably, we had to leave the magical Far North, but we consoled ourselves by planning our next adventure on the long drive home. Big trevally in the berley trail.