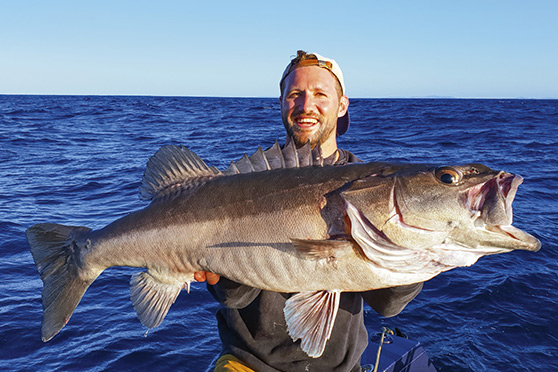 After spying a nice break in the weather and a gap between charter bookings, Nick Jones and fellow Hauraki Express skipper George hatched a plan to hit the northern coast of NZ, the target species being kingfish, hapuku and snapper…

We found ourselves in sunny Hohoura around midday loading up our vessel to the gunwales in preparation for the next three days. With this vessel being a 589 Stabicraft not even adorned with a soft-top, she was going to be an interesting overnighting proposition.

Regardless, as we cruised around Perpendicular Point at Hohoura entrance we were happy to be there. The plan was to make a beeline for North Cape, soft-bait for snapper that afternoon and then tuck into an anchorage to stream some World Cup rugby action. However, upon arriving at North Cape it quickly became obvious that our single bar of 3G reception combined with the woeful Spark Sport coverage meant that this would be an exercise in frustration.

So we pushed on further around North Cape, helped on our way by a light easterly breeze. With large 7” soft-baits rigged up, we spied a likely-looking area where the current was back-eddying and we could make out patches of foul and sand. My second cast was slammed by a nice snapper on the drop, and from then on George and I went fish for fish. There was no such thing as a pannie in this spot, with plenty of fish around the 10lb mark and the biggest snapper of the session hitting the high teens. Fishing in less than 10m of water, some of the strikes were almost at the surface and we had a ball with willing participants on every cast. The snapper were all in great condition, and one even spewed up some crayfish appendages! 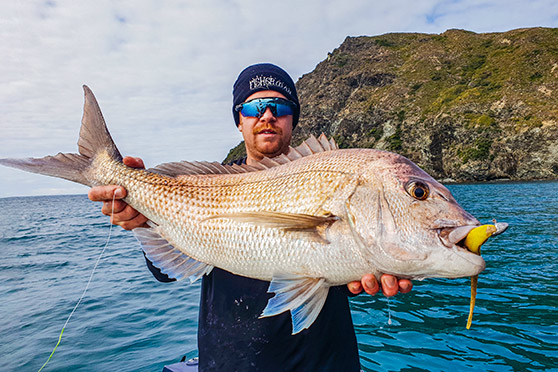 With all fish successfully released, we cracked a celebratory brew and headed off into the sunset towards Spirit’s Bay. Parking up in the bay we deployed a berley and set about catching some livebaits for the following day – a mixture of small trevally and kahawai checked into the livie ‘hotel’ for the evening. The interesting highlight of our time catching bait was nabbing a decent tarakihi on a micro soft-bait in four metres of water. Unfortunately, it popped off the hook as it was being hauled aboard to join us for a photo and a meal – a lucky escape!

Rising the next morning, George made a hearty coffee from his special blend and we were off – destination Cape Maria van Diemen. The primary target was kingfish, and we started off dropping livebaits over some spots where we had enjoyed great success earlier this year. Even though it looked like a few kings were hanging around on the screen, they weren’t on the chew. We moved on to the cape itself and slow-trolled livebaits around this gnarly piece of water, prone to swells from all angles and huge currents. As the livies were unsuccessful again, we began casting stickbaits along the frothy rock ledges. However, the kings remained conspicuous in their absence, and even the normally suicidal kahawai weren’t interested in the surface lures.

As the day wore on our thoughts turned to hapuku and we set a course for a likely spot. On the way we encountered a school of large hump-headed trevally feasting on krill at the surface. George lobbed out his stickbait and duly snagged one of the trevs for ‘puka bait. This pedestrian foul-hooking of bait quickly turned into mayhem as George spied a huge kingfish shadowing the distressed trevally. I could tell just by the pitch of George’s excited squeals that this thing was a donkey and I rigged up our biggest trevally livebait and fair landed it on the monster’s head. After close inspection, the king turned his nose up at my offering. George then pinned on his freshly snagged 5kg trevally to ‘match the hatch’ and the brute ignored this too! Not our day for kingfish obviously. 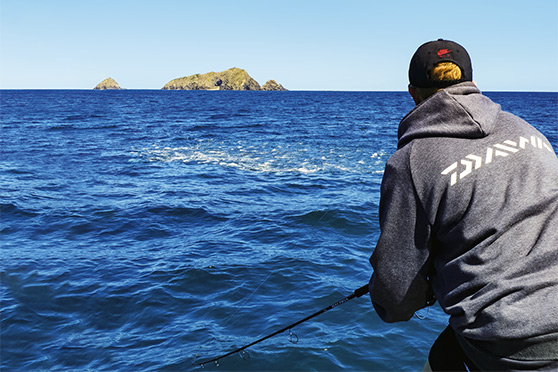 Working the school of trevally that was shadowed by a large kingfish.

Our focus once again turned to hapuku in which we hoped to find redemption. Pulling up to the area of deep foul, the sign wasn’t looking overly promising. We set up a drift anyway and bombed a few baits to the deep. On the third drop George finally got some solid bites and came up tight. Not a big fish, but it was fighting like the target species and sure enough, up popped a tasty hapuku. George’s fish went for a hapless live trevally so I rigged up two fresh livies and as soon as I touched the bottom – boom! I’m on! After a short tug of war I gained the ascendency through the heavy drag of the Daiwa Saltiga and up popped a bigger ‘puka. High-fives all-round as we set sail for Tom Bowling Bay for the night. 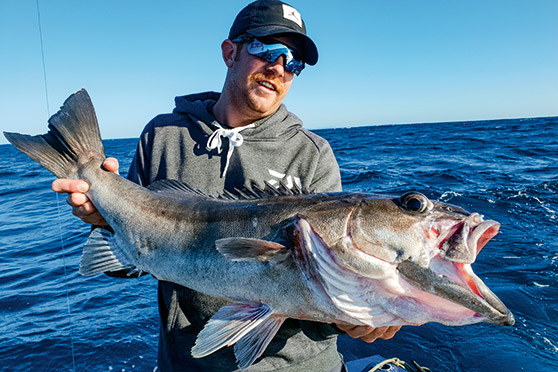 George nabbed the first hapuku of the trip, a perfect eating size.

Arriving at dusk, we found the bay glassy calm and fried up some ‘puka burgers with copious amounts of Japanese ‘Kewpie’ mayo, which complimented the craft beers nicely – just the ticket to raise morale before another long, cold, dewy night’s sleep. On our final morning we returned to snapper alley and were rewarded with simultaneous strikes on our first casts from nice specimens. Unfortunately, that was as good as it got apart from a few lazy kingfish follows on our stickbaits at a couple of spots on the return leg. It was a great trip, although frustrating on the kingfish front. Oh well, two outta three ain’t bad.