During 1769 Captain James Cook sailed Endeavour along the northeast coast of New Zealand. On his voyage he navigated past Cape Karikari and Berghan Point, recording in his journal ‘doubtless a bay’ was between the two landmarks. Only 23 years later this was confirmed by the first American whaling ship that there was actually a large bay, now named Doubtless Bay, between the two headlands.

Some 249 years down the track, myself and the man behind JAF, Aaron Styles, set up camp on the northernmost part of Doubtless Bay in the small beach town of Tokerau.

With hopes high and a perfect forecast, we elected to go wide in search of pelagics for the first part of day one. At around 0800 hours we reached the 505 Knoll onboard the Surtees 495 Critter Collector and altered course toward the Garden Patch pins.

The water looked reasonable, and the temperature was up to 21.2 degrees, but it seemed lifeless, so the call was made to point the bow west and go inshore to catch something to eat.

En route we were interrupted by a couple of nice albacore which kept us entertained for a few minutes. An hour later the lures came in, and we steamed towards the coast to fish a piece of foul neither of us had been to before but were keen to check out.

Arriving on our spot, the sounder showed a pin loaded with bait and hanging around the edges were our next target species: snapper!

Unsure what to expect, we began flicking our Z-Man lures with most casts producing a bite. The quality of each fish was spectacular – they were in prime condition and hard fighting.

When the tide went slack after two hours we called it a day with a couple in the bin for dinner and 10-, 17- and 19-pound fish released, along with a handful more.

The next morning it was a 5:30 am start. With Critter Collector launched, it was off to cast lures into more unfamiliar water.

The morning was designated for kingfish. We targeted them with stick baits, fishing our way around the cape and throwing lures at anything that looked like it had potential.

We caught a couple of smaller fish early on and then moved up the coast to a group of broken islands which were loaded with feeding kahawai.

After countless casts for little reward, our last cast was called on a small, shallow awash rock. Landing my lure right on top and taking one sweep, the Carpenter stick bait was inhaled by a better-looking fish which proceeded to scream off into the reef. After an intense scrap in uncomfortably shallow water, a tired kingfish was boat-side and quickly photographed before release.

With that ticked off, it was back to the snapper nest, a few miles away. Upon reaching our destination, conditions had changed dramatically. The tide direction, bait and fish sign had all changed. With an hour of outgoing tide left, the bite was slow, so we planned to have lunch and a swim, then re-position after slack water.

Incoming wasn’t much of an improvement, with us only catching a few smaller models until Aaron’s soft-bait was smashed on the drop by something angry and heavy. It was an epic win some, lose some battle, the fish not so keen on leaving the bottom and giving the custom Yee Haa JAF rod a good workout.

Ten minutes passed and eventually the fish was running out of steam, slowly nearing the surface, giving us the first glimpse. Boat-side, and barely fitting in the net, we pulled her onboard and took a weight (21lb) and length (84cm) measurement along with quick photos before release. 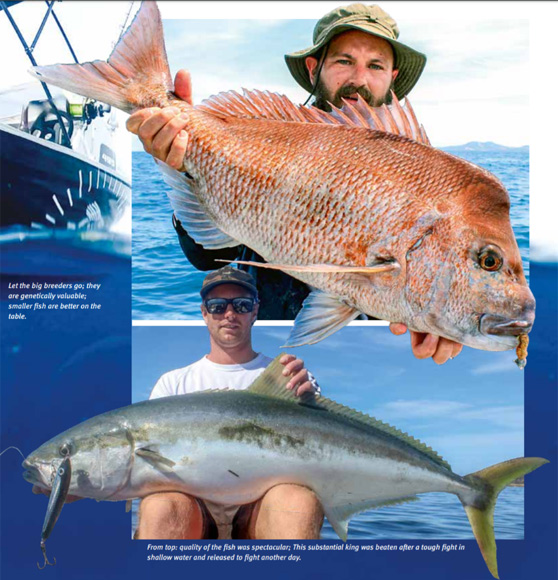 The snapper was tired and full of air, so three jigs were rigged together with a barbless hook attached upside down and in its lip. On reaching the bottom, the fish shook itself free and carried on with her day.

The feeling of accomplishment was flooding the boat, so we kept a couple more ‘pannies’ for the family and, around mid-afternoon, called it quits.

The Far North has an amazingly diverse and healthy fishery, and I personally have been lucky enough to spend a bit of time up here over the past six years.

With everyone doing their part, it can be like this forever, so maybe even you will get the opportunity to fish it one day too, and like us, be awestruck by the location and what it has to offer. 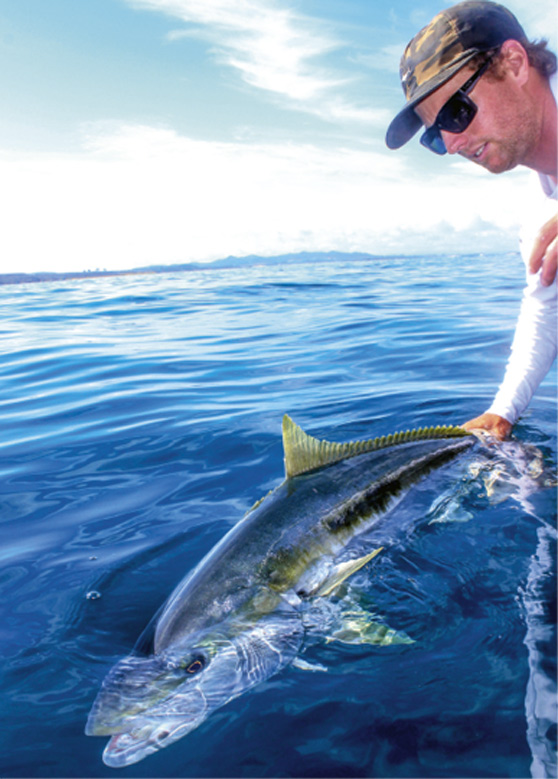