Rob Fort ticks another magical location off the list, and has a great time in the process

Every angler has a list of dream locations to visit on his/her bucket list during a lifetime of fishing. Channel Island is one such place for many, located six kilometres from the upper part of Coromandel’s northern tip. Deep water surrounds it, accompanied by fast currents, making it a magnet for fish, with a decent number of kahawai and trevally schools in residence most of the year. This, in turn, sees large predatory fish species such as yellowtail kingfish on offer.

Because it’s relatively close to our largest city, many boat fishers visit the island on day trips. However, the area is also very exposed to the elements and notorious for the extreme conditions that frequently envelop it. It’s not a place to take lightly and is a particularly difficult place to fish from kayaks. The wind usually only drops for a very short time, making it risky for kayakers, because things can change so quickly. Consequently, few kayakers have been out to the location, and those who have done so, have used a mothership.

I was only too aware of the logistical problems involved. In addition to the powerful currents and exposure to the elements, I had to work out how to hold position in the current and fish at the same time. Till recently, that was impossible – but no more. By switching to a pedal-powered fishing kayak more than a year ago, I can now            control the boat’s position in current-affected areas so much more effectively. As my legs are used for propulsion instead, I can position and hold the kayak directly above the fish, then drop a lure or bait to them.

Finally, a perfect weather window presented itself, accompanied by small tides - the opportunity to embark on a Channel Island adventure had arrived. It would involve three of us in our pedal-powered Old Town Predator PDL kayaks and we would leave from the Port Jackson DoC camp ground. It’s the perfect location, with the beach next to the camp enabling easy access for kayak launching.

Damian, another Coromandel local, joined me at the camp first, and we set up our tents before taking a break during the hottest part of the day. This also gave us the chance to talk with some other anglers who’d been out during the morning in their small watercraft. They had little to show for their efforts, only managing a few smallish snapper. This is common to hear when visiting an area, yet it never deters me, because kayaks have the massive advantage of stealth when on the water.

Later in the afternoon, Damian and I left the beach and headed for the western side of Port Jackson in search of fun. Things started slowly, although we both enjoyed some success on micro-jigs. As the afternoon turned into evening, the fishing action heated up, with plenty of snapper falling victim to the micro-jigs. Interestingly, my Zest Slow Jay jig seemed to be outperforming the jig Damian was using, and when I landed a legal kingfish on it, he quickly changed over to one, too. 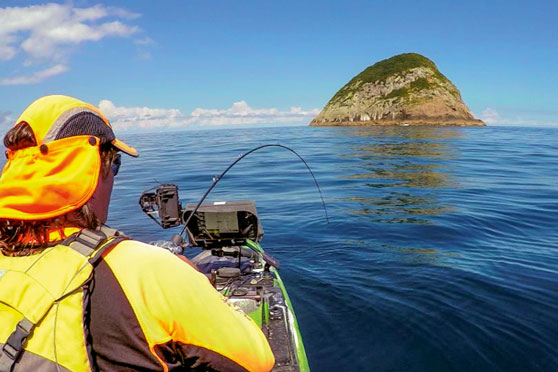 We fished our way into the late evening, enjoying many good snapper, with Damian landing one that would have been at least six kilos. All the fish were released back to the ocean.

Our long drift had taken us right across the bay, and with the sun setting, we made our way back to base, where we were greeted by Jeff, who had travelled across from Auckland. Our evening was spent around a fire enjoying steaks cooked on the hot plate and talking about the day to come.

Waking up the next morning, just before the alarm went off, everyone was quickly out of their tents and into coffees. The sun had yet to rise and our anticipation was high; we could hardly contain ourselves as the kayaks were set up, then transported down to the beach.

The day was stunning, with no wind, and as we launched gannets began diving out in the bay, which excited us even more. Upon reaching the area, we hooked into some decent sized kahawai, which had been herding baitfish to the surface. All of us were laughing like kids as we enjoyed their powerful runs, the line peeling from our light soft-bait sets. The gannets soon moved off though, so we continued the six-kilometre journey to Channel Island; with high tide at nine in the morning, we planned to arrive an hour before to make the most of the slack tide either side of it. That meant we had some time up our sleeves, so we visited an area of reef just over halfway to Channel Island. However, a number of drifts over the area proved unsuccessful, so we continued on to our destination. When we arrived, the place was packed with fish life, with plenty of seabirds diving on surface schools of baitfish. Initially we just sat amongst the huge schools of fish, watching them. They appeared to consist of kahawai and trevally - until the sight of kingfish deeper down under them changed our attention back to fishing!

Conditions were so perfect that Damian could stand up in his kayak with his jig set in hand and drop a silver Zest 200g jig down into 30 metres of water. A few lift-and-drops of the rod had him straight into a kingfish, and he quickly sat down to do battle. It was pleasure to watch: the fish appeared to be a good size, pulling out line and towing the kayak. 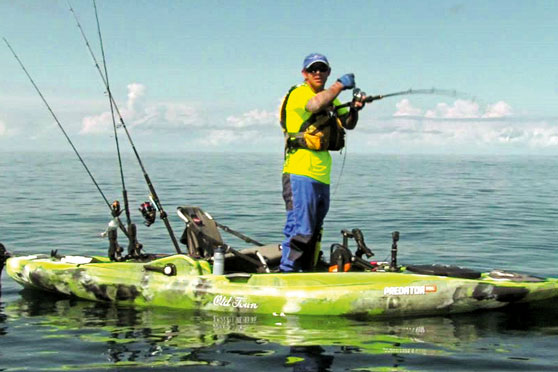 Damian is relatively new to mechanical jigging for kingfish, and was getting a bit of a sleigh ride, with the kingfish heading straight for the shallow reef closer to the island. Sure enough, the fish found the reef, but fortunately only managed to somehow dislodge the jig hook from its mouth.

However, after repositioning over the fish again, Damian soon had another on his line.

This time he was a bit more aggressive, using the kayak’s superb stability to get as many winds back as possible before the bewildered king fought back, and then apply decent drag pressure. Also, when the fish tried to swim towards the reef, Damian used ‘pedal power’ to steer it away, and was rewarded with a nice fish around 15 kilos - which went back after some photos.

Jeff was hooking kingfish, too, but they proved to smart and tough for his setup. Fortunately, after a close inspection of his gear, we realised the problem and rectified it.

Meanwhile, Damian was on a roll, making short work of another solid king while Jeff was out of action.

Capturing all the action on camera prevented me from putting a line in the water, but when I finally did, a hefty kingfish was quick to react. The fight was a good one, forcing me to lock up the reel by putting my thumb on the spool. While this saw the rod wrapped around the side of the kayak, it successfully prevented the king from reaching the sea floor, with only small runs being made when the spool was released. It turned out to be a nice fish of around 15 kilos, and as it was bleeding, I put it on ice.

The action was even better than we’d been hoping for, and we continued dropping jigs to the kingfish patrolling below the schools of kahawai and trevally. Finally, Jeff hooked into one that stripped line quickly from his reel, until the drag was adjusted and slowed the fish down.

Words of encouragement filled the air and plenty of banter was exchanged during the battle. Jeff was beginning to realise just how hard these powerful predators can play when on the line. You can’t give a kingfish anything, so it’s important to get every bit of line on the reel whenever possible using short lifts of the rod. This seems to bring them up easier, as opposed to longer lifts, which gives them time to turn and gain some momentum.

Finally, Jeff won the battle, with the gaff being set into another nice one.

We then sat back in our seats, satisfied with the epic battles we’d enjoyed - but also amazed no other vessels had taken advantage of the hot bite time. We had the place to ourselves.

The tide was finally turning, which is probably why things started to go quiet, when all of a sudden a pod of dolphins appeared, coming straight towards us. We took the time to enjoy their presence, and with the current finally picking up, the schools of fish began moving out, away from the island and dispersing in the process.

So, with things now quiet, we headed back towards the mainland in the direction of Fletchers Bay, hoping for more action along the way - a few of the pinnacles having produced kingfish in the past.

However, apart another dolphin encounter and a nice blue cod that fell to a micro-jig, the fishing remained slow as the sun beat down on us.

On the positive side, it was one of the calmest days we’d experienced all year, and had given us the opportunity to go where no other kayak anglers had gone before, and for that we were truly grateful.

Okay, so we didn’t manage any really big kingfish, but the ones we did get were certainly nothing to scoff at, especially from a kayak. The real buzz, however, was getting out to fish this wild part of the country – something most kayak anglers only dream of doing.