A trip to The Three Kings with Hauraki Express After much planning, time and money had gone into a proposed Three Kings trip aboard their Extreme trailerboat, the weather presented the right window and Nick Jones and his crew were finally underway…

Nervous excitement had reached a crescendo by the time the boys left Whangaroa Harbour in the pitch-black hours of a still autumn morning. Our next stop was the Three Kings Islands.

Much planning, time and money had been invested by all into this trip. Midnight Express had recently been serviced, and fellow skipper George Bourke and I had stripped her of all unnecessary Hauraki Gulf charter gear (i.e. hundreds of kaburas). I’d brought the boat up on the water with my friend Tom Bilkey, trolling into 20 knot north westerlies for two days all the way from Westhaven.

The Bunting boys, Kirk and Mitch, had arranged a pad overlooking the harbour to use as a base, while Aaron Styles had organised a berth in the marina. Aaron also put his hand up for catering duties – an unenviable task of providing fuel for five lads set to be exerting plenty of energy. George had created a secondary livebait tank ‘McGyver’ style, utilising a hose splitter and rubbish bin lashed to the duckboard.

The day before departure we filled our two livebait tanks with prime-sized jack mackerel, although there were numerous casualties overnight. The final customary task was loading the chilly with ice and stowing away as much Moa Legasea Lager as we could – not only do these puppies support a good cause but they taste delicious after battling a big kingfish. It was undisputable that none would return intact.

So here we found ourselves, running up the coast towards the continental shelf drop-off beyond North Cape where we would put the lures in as soon as there was any light on the eastern horizon. And sure enough, an amazing sunrise welcomed us as we deployed a spread of five lures – one picked by each man on board. My choice was the ‘Fiddler’ – an old Broadbill Custom lure kindly left on-board by Tom that’s skirted in black and silver, aggressive, and most importantly already accountable for two marlin and a big yellowfin tuna. I regaled the boys with tales of the Fiddler’s success and put him in pole position on the long ‘rigger.

While baitfish were spread few and far between, the current was intense and the water warm and blue. Not far after passing the Compass Rose we were treated to the wonderful sound of an outrigger popping and a reel screaming – the Fiddler was on one!

George was on strike and the fish’s initial performance left us in no doubt as to what we had on – a rampaging blue marlin. The fish settled down and I took over the helm. I started the chase and George regained line. There was a bit of back and forth with line pinging off the reel, but we had her on the leader within about 20 minutes. Aaron had the gloves on in an instant and with steely-eyed determination braced himself into the back corner of the deck as he took wraps on the blue. As the fish powered towards the propeller, I increased the revs and turned the boat away. Aaron held on like a champ, wearing the full power of this beast and before we knew it, Mitch had its bill. Anxiety turned into celebration, photos were taken, the majestic blue unicorn of the sea was successfully released and a bottle of bubbly was passed around. It was the perfect start to our trip, and we were more than happy to speed up our journey towards the islands. 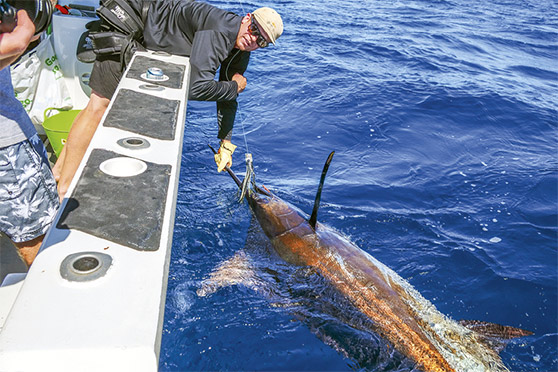 Making a beeline towards some likely looking pins, we warmed up with some modest kingfish on livebaits. We then moved onto a more scenic spot close to the islands where a strong ocean current was running into the gnarled rocks. Slow-trolled livebaits were quickly replaced with soft-baits after we noticed a bunch of hump-headed trevally feeding in the wash.

Rick Pollock from Pursuit had told us the trevally fishing had been superb, and boy, he wasn’t lying. We enjoyed a session of unprecedented action, with every cast producing a bust-off or a hard-earned silver chunk in the net. A typical cast of the small grub soft-baits into the white water involved either a hit on the drop or one within the first few twitches of the retrieve, followed by a couple of angry headshakes and a blistering run straight down to the reef. If you could manage to stop them from reaching the bottom, you still had the challenge of not pulling the hook out of their soft mouths. The power and size of the trevally blew us away and we managed many specimens around the 6-7kg mark, with Aaron accounting for the biggest at over 8kg. In the fading daylight we turned Midnight Express towards Northwest Bay where we put down the pick for the evening. Being the Three Kings, it would be wrong to stop fishing. We soon had a berley trail pumping and caught much smaller trevally that were destined to be live baits the next day. As the jack macks were wearing thin in the tanks, these were very welcome. After a bouncy night in the bay we were happy to rise and catch more bait. Luckily, both koheru and small trevally quickly entered the berley trail and we had the ultimate supply for a day of hardcore kingie hunting. If we thought that this was only a bait spot, however, we were quickly proven wrong as some chunky kingfish began lurking around the koheru school under the boat. Three kingfish around 10-15kg were snagged on live baits deployed 5m under the boat at anchor before Aaron could muster up brekkie – only at the Three Kings! 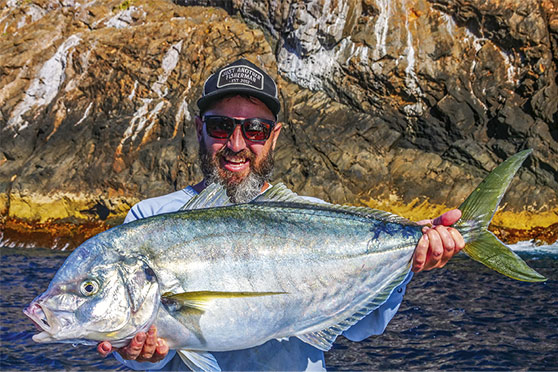 Aaron Styles nailed countless big trevally like this one on small soft-baits.

On this day we opted to stay around the islands rather than journey out to the famous and productive King or Middlesex Banks. Slow-trolling livebaits was the order of the day, and we settled into our work patrolling the cliff-faces. The kingfish were hungry, and we found numerous hotspots holding big kings. We landed a few over 20kg, and George got the cream again with a 32kg hog that inhaled a koheru and instantly slammed him into full dung beetle mode. His Daiwa Saltiga combo proved up to the task. As expected when kingfish hunting, there was a fair share of heartbreak and wound-licking too – Kirk losing two hogs in a row on big trevally livebaits, and yours truly pulling the hook on the biggest king I’d ever tussled with just as I was gaining the ascendency. 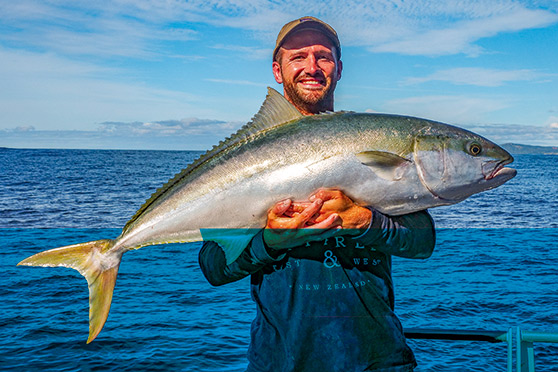 The writer with a PB 26kg kingfish, the best fish to come off the coast.

As the kingfish bite slowed in the afternoon, we turned our attention to those monster trevally and stepped it up to another level. We landed even bigger fish this time round, with one of mine taking the scales past the magic 20lb mark! The writer with his trophy 20lb trevally.

A few Legasea Lagers were deleted that night at anchor in an eerily calm Southeast Bay. The lads woke up after a sleep that would rival one in Westhaven marina and prepped for another bait session. It was slow until later in the morning when a koheru school turned up and we realised they had a distinct preference for tiny soft-plastics.

Returning to yesterday’s hotspots, we found the kings but they weren’t really on the chew. We then fished some deeper spots for limited success before throwing the gamefish spread out and trolling back to the mainland. It was a sad sight seeing the islands growing smaller astern, but we had the exciting prospect of fishing the coast around Cape Reinga and Cape Maria van Diemen in variable wind and low swell conditions.

Arriving at a promising spot, George hunted around as our collective eyes all focused on the sounder. Lo and behold on the edge of a drop-off appeared a pack of red slugs – almost certainly hog kingis! Lines were deployed and the boys were instantly into the action, freespooling big livebaits down their gobs before flicking the reel into gear and holding on tight.

Mitch and Kirk both pulled some nice specimens over 20kg and I managed to hold onto one that we sling-weighed at 26kg – not quite the 30 kegger I was after but still my new PB. We shifted to another spot, found the sounder slugs and this time George and Aaron both got onto 20+kg fish. There were plenty of chunky kingfish to go around.

To everyone’s dismay we had to leave before we’d even scratched the surface of the place. We sped along past the Columbia Bank, which looked intimidating even on a benign day, and the boys fell silent as we reflected internally on the successes and regrets of our stunning trip. The Three Kings is a place that keeps you coming back for more, and we all vowed to return next year to step it up another notch.