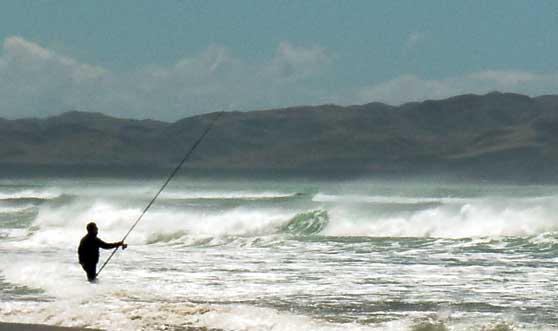 While the world is full of wonderful fishing places, some of the best are actually here in New Zealand. Indeed, you may find one or two just down the road from your home.

I have a bag-full of special spots in my memory, some near, some far, but all special and stored away ready to recall when looking at road trip options.

Close spots for me include the wonderful, lightly-fished beaches of the central Hawkes Bay’s southern coast. A good example is Porongahau, where you can spend all day on the beach and not see another fisherman. This huge sandy beach is the perfect place to hone beach-reading and sand-driving skills, as well as being a great place to catch huge kahawai, gurnard and tope. It can be a scary drive down the beach when the tide is up, even in a fourwheel-drive, but if you can get to the water’s edge at low tide, then any vehicle will suffice. Just don’t get caught out by an incoming tide!

The beach has the Porongahau River flowing over it about halfway down, five kilometres from the access at Porongahau Beach settlement. This attracts flounders, whitebait, lemonfish, kahawai, kingfish and red cod.

Back down the beach, away from the river, there are spots where big trevally lurk, as well as moki. Sharks are common – mainly tope up to 30kg, but one time I caught a blue shark that took a live bait I’d set for a kingfish.

Wherever you fish though, don’t hold your breath waiting for a snapper, as they are few and far between. However, I have caught a couple of record-sized fish from this beach: a New Zealand record eagle ray weighing 43kg on 6kg and a Pania Surfcasting Club record gurnard of 1.58kg. It’s the sort of exposed coast that can throw up a special fish at any time. The next beach south is a secret getaway spot. I have never seen another beach-fisher on it, even though I’ve fished there several times. Called Whangaehu, it’s at the end of a long, tedious, twisty dirt road that seems to go on forever without getting anywhere. Once you arrive, though, you will be excited by the prospects.

At the road end there’s a sandy beach that screams gurnard – although I have yet to catch one there! Then, slightly right, where a small stream runs out, is a kahawai hotspot – a never-fail spot for me so far (and one caught there weighed in at 3.1kg).

To the right the beach and close-in water are dotted with rocks. I haven’t tried the area yet, but it looks like a wonderful night-fishing spot. Further right, to the south, there is a solid-rock reef that’s possible to fish off; in days gone by, boats came in to be loaded with wool here. There is a story that dolphins once herded snapper into the beach and held them there for three days. Locals came out from the farms and filled sugar bags with the snapper they caught on hand lines.

I tried float fishing here to keep my hooks out of the rocks. It worked well, and I caught hiwihiwi, marble fish and big banded wrasse. This spot deserves some serious fishing time; I suspect it could be a number-one moki spot.

Moving further south again is Herbertville Beach. This is another beach that experiences only light fishing pressure. It is sandy for most of its length, with a couple of easy access points.

At the southern end of the road there are rocks. Lots of rocks. Some are huge, house-size boulders that exclude access to the beach. However, there are gaps where it’s possible to get a line in the water, and the locals tell of good moki catches there. A stream towards the end of the beach attracts kahawai, and is worth a shot if the sea is calm enough.

At the northern end of the rocks are a couple of bigger sandy gaps that are worth prospecting as well. You are probably going to lose some gear while sorting out the best spots.

You can expect lemonfish, kahawai, trevally and also the odd moki. Locals talk of some big snapper being caught here – 10kg size – but few in number, perhaps one or two a year. Even so, these are fish worth putting some time in for.

The beach is also a hangout area for sharks, which can spoil your fishing day. Change to shellfish baits if they are a problem.

Because of the variety of fish available on these beaches, it’s worth making sure that you take a variety of baits to suit the natural feed available in the various environments. For example, mussels, crayfish and crab for the moki, pilchards for the kahawai, and some salted skipjack for the possible gurnard. Berley is well worth trying, and will attract fish to your area. Some days this may include sharks. If this happens, try mussel berley and hope for some moki to show up.

You could catch a variety of interesting fish if you fish next to the rocks. There are spotties, several parrotfish species, hiwihiwi, banded wrasse, yelloweyed mullet, parore and other rarer species, such as monkfish (stargazer) and blue cod. A sturdy rod and reel is useful in this situation, where you may need to bully fish out from heavy cover.

Long-casting gear is recommended for the sandy spots; you may find gurnard well out away from the surf. However, kahawai will be in the broken water, along with the kingfish and lemonfish.

You can also catch kahawai on spinning gear at the river and stream mouths using hex wobblers or similar spinners. Look for them in the waves. Often kahawai can be seen darting through breaking waves while chasing baitfish. That will indicate a good spot to bait fish, or, if you’re ready for it, cast your spinner for sometimes instant success. 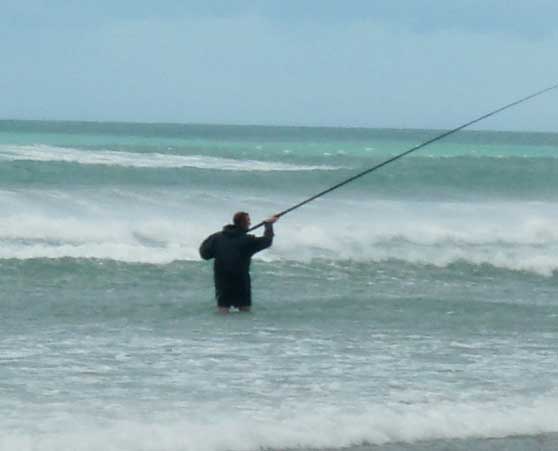 You may also see offshore schools of kahawai along this coast. Keep an eye on their movements and you can intercept them if they come into the surf area. Terns and gannets are the birds to watch – they follow the kahawai and can give you a good indication of where they are.

Most of the fish species are seasonal on these wonderful beaches. Gurnard turn up with the equinox in spring and leave with the arrival of winter. Snapper are present in high summer, if at all – for reasons best known to them, they don’t frequent these beaches in any numbers, although odd ones are caught, usually of good size. Kingfish are the same, just showing briefly in the heat of the summer.

Kahawai and lemonfish are year-round propositions. Lemonfish or spotted smoothhounds show a tendency to enter the rivers here, which is not a common trait elsewhere. Red cod show up when water temperatures drop in May or June and are usually gone well before Christmas. The red cod on the southern beaches are great specimens, big as kahawai, solid fleshed, and strong biters when they are around. These really are worth catching, unlike some of their smaller cousins found further north.

There is good variety all year round. The saving grace on these beaches is that the weather determines the amount of time they are fishable – a lot of the year, high seas and strong winds from the south keep us off them. The good times are certainly worth waiting for though.