The Coromandel Peninsula is one of the country’s hottest holiday spots. If you’re heading to the western side of the hill, Rob Fort has some tips for fishing the Firth.

Coromandel is one of New Zealand’s top holiday destinations, attracting thousands of visitors during the Christmas break. The stunning landscapes of the peninsula are an outdoor enthusiast’s paradise, yet it is the prime coastal environment that is a major influence in attracting so many to the area.

The east coast is the most popular with tourists because of places like Cathedral Cove, Hahei and Hot Water Beach. With the Pacific Ocean fringing its shores, a number of offshore islands are also on offer and provide great opportunities for fishing and diving. The rich marine life provides anglers with prime opportunities to catch quality fish, especially species like yellowtail kingfish and game fish.

A short drive over the hill to the western coastline puts anglers amongst the nutrient rich waters of the Firth of Thames, which flow all the way into the Hauraki Gulf. These nutrients are so good that vast areas have been developed for the aquaculture industry, which produces green lip mussels. The various mussel farms, in turn, provide an eco-system that allows marine life to exist and flourish. These mussel farms are mostly unique to the west side of the peninsula, the exception being a small one at Kennedy Bay. During the holiday break these can be a good option for fishermen, especially when looking for snapper, but there are so many more areas worth exploring on the western coastline. 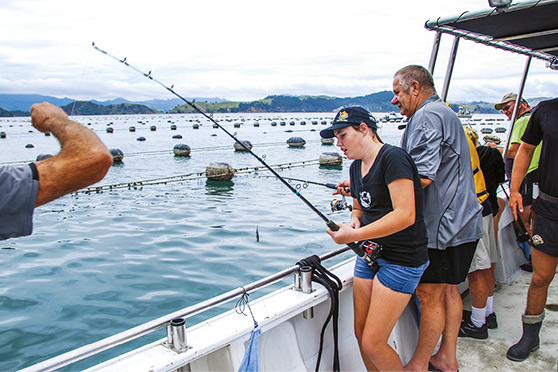 The mussel farms are excellent places to find fish when they are providing elusive during the busy holiday period.

What kind of fish are on offer?

A variety of fish species are available along the western coastline which gives you lots of options for fishing. The area is well known for snapper, which can be found pretty much everywhere and can be caught using most fishing methods. This allows for plenty of opportunities to target snapper using modern lures like soft-baits, inchikus, kaburas and jigs.

Kingfish are also around and can often be found in smaller schools of three to four individuals with some of them very big. They don’t hang in one area for long and prefer to move around, patrolling the coast in search of prey. Because of this you can find them right up in the shallows as well as out deeper on the reef edges. Headlands with current are also good areas to sit with a livebait under a balloon while pumping out a berley trail. This has proven to be one of the most effective ways to catch them in the western Coromandel area but be prepared to wait until one swims by.

Good numbers of kahawai are in most places from the northern most tip of Coromandel’s western coastline through to the outer islands of the Happy Jacks and down to the Wilson Bay area. These are such an underrated fish which not only provide fun for everyone fishing, but also a feed.

Species like gurnard have started to make a comeback in recent years and can be found in less than ten metres of water. There is always a chance of a john dory, especially if there is some baitfish holding in an area. John dory are also quite common within the mussel farms.

Trevally also frequent the farms and some larger individuals are available inshore as well. Prospecting in water as shallow as two metres with soft-baits is a proven way to catch them. Species like jack mackerel, koheru and piper make up the baitfish schools, with yellow eyed mullet also available.

With so much food around for predatory fish, some not so regular visitors like skipjack tuna can also show up. Even the odd marlin comes into the area at certain times of the year. But one species sure to be around is the shark, with bronze whalers and makos commonly making an appearance. Generally, sharks are not a problem due to the numbers of fish available, although they will take any fish speared or on the line.

Ramps are available from Waiomu in the Firth of Thames right up to Amodeo Bay; areas outside of this are beach access only. The other consideration is the low tide which renders a number of launch sites inaccessible during this phase.

The best option is to check the local information for each ramp when launching the boat and select the best ramp for you. There are many options on the western side for launching smaller watercraft like kayaks, with areas like Wilsons Bay, Te Kouma, Papa Aroha and Fantail Bay all popular locations. Parking can also be a problem during the busy holiday period due to high demand so be patient and consider other road users when positioning your vehicle.

The west side offers plenty of places to fish and it all starts in the Firth of Thames, in which the mussel farms remain one of the most popular places to find fish.

Not far away is Wilsons Bay. From here through to Deadmans Point you will regularly find workups. The area offers small pinnacles breaking the surface and big kingfish at times, with double figure snapper also around. The mussel farms towards Mania are also great places to find snapper and the odd trevally. On the opposite side of Mania is Wekarua Island, which offers a patch of shallow reef on its eastern edge. This is a great place to sit on anchor during an outgoing tide with a livebait as big kingfish patrol the area. There are more mussel farms on the southern end of the island which offer good snapper, including the farms directly north. Decent trevally are available on the western coast of the Coromandel Peninsula.

Next is Te Kouma Harbour, a popular spot for boaties to stay overnight and another great place to find fish in water as shallow as two metres. Sitting at the entrance with livebaits and a berley trail can produce kingfish. The channel between here and Rangipukea Island offers reef and current lines which attract various predatory fish.

To the north are the Calf and Cow Islands which are another great place to find most species the area has to offer. A drift between the islands and over the drop offs while casting soft-baits can be very productive.

Back towards the mainland is Coromandel Harbour, which Wanganui Island is a part of. The area has much to offer including mussel farms on opposite coastlines at its entrance. Workups are common around this area also, with kahawai the usual suspects and snapper not far behind. Heading north, there are a number of islands including Motaupere and Waimate – the waters between which offer productive fishing and opportunities to catch snapper right up in the shallows. John dory can be in this area as well and can be caught using livebaits drifted along the northern edge of Waimate Island and around to where it meets Motukopaka Island. There are many more mussel farms around this area offering the usual fish with the farm along the eastern side of the island holding good numbers of kingfish.

A kilometre north of here is Motuoruhi Island and more excellent terrain, with the western area particularly good when the tide is running. It’s productive from here to Shag Rock, offering good snapper fishing and the chance of a kingfish. The area east from Shag and the Motuoruhi Islands, known as Hautapu Rocks, is worth a few casts, especially if using soft-baits, with kahawai, kingfish, snapper and the odd john dory available. All of the islands surrounding the Hautapu area protect the waters north and east of them, and the channel at the northern end acts as a highway for fish travelling into the area.

Heading north is Papa Aroha and, two kilometres offshore, Motorua Island, which has yet another mussel farm along its eastern side. The western side of the Ngamotukaraka Islands holds good snapper and there are kingfish present at the northern part of the islands. Motutekupu Island is next in the queue – this is the one coloured white from gannets roosting on it. The entire area surrounding this island is well known for producing good snapper and kingfish.

The nearby Motukaramarama Island has a gannet colony and fishing is good all around the coastline, including at the close by Motuwi Island and other islands found at its eastern end. The area has good current lines and reef systems with weed edges. This makes the islands super productive fishing grounds with most species on offer quite close to the shore – this also makes it an ideal playground for rock hoppers.

North from here are the open waters out from Amodeo Bay, a popular place for snapper to roam. Heading west is the last of the islands: Motuwhakakewa, Motukahaua and Motoumakareta (Happy Jacks). The islands offer a number of terrains to explore and various fish species, with deep water close by also. The Black Rocks are a kilometre northeast and is yet another area that attracts fish to its base. The mainland coastline from Papa Aroha all the way up to the north-western tip of the peninsula provides similar opportunities to what’s on offer around the outer islands. Often overlooked by many of the holiday makers, the inshore areas can provide some excellent fishing opportunities. 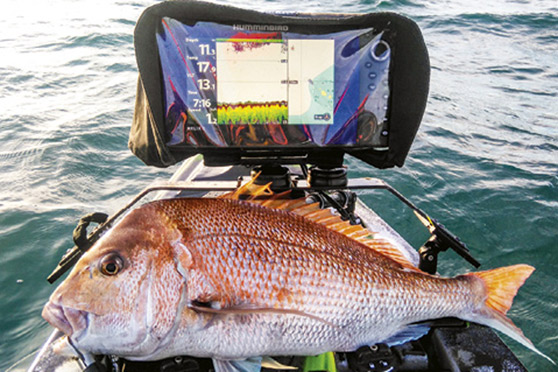 Prime holiday west side snapper caught during an evening soft-bait session while holiday makers are off the water enjoying their evening BBQ.

If you are planning a trip to this part of the Coromandel Peninsula I highly recommend being prepared, especially at this busy time of year as you have limited options.

If you are boating, be considerate of other water users by sticking to the rules. Be patient at the ramp when launching and keep your time on the ramp to a minimum. Parking can also be a challenge at this time of year with facilities pushed past what they can cope with. This causes all sorts of issues, especially where vehicles with boat trailers are concerned. Do your best not to obstruct or block the flow of traffic. In regard to weather conditions, the west side is exposed to any westerly winds so use caution when these are forecasted. There are always places to fish that are sheltered though and this is the great thing about this location. With fish of epic proportions on offer and so much coastal environment to explore it’s easy to see why so many flock to this part of New Zealand every year.

Makeover for the Surtees 495 Workmate February 2021

Surtees have given its popular 495 Workmate a facelift...... more > 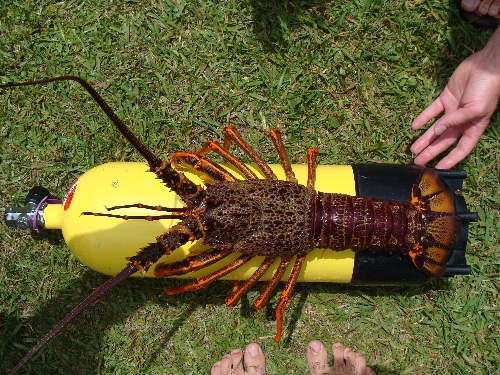 ! 1 of two for a good family feed caught in 4m of water - Mandel