With winter setting in, the fishing gear usually gets put into a corner and is often not seen again until summer. However, for the people that are prepared to venture out into the cold, the fish are still there to catch.

I have heard many stories over the years, that suggest the fish move out of the Hauraki Gulf into deeper water during the winter for all sorts of reasons, but I have found over the last few winters, fish seam to remain in and around the Gulf in good numbers. I don’t know if it is just because less people are on the water, so there’s not as many people talking about ‘hot bites’ and we all make the assumption that the fishing is poor.

The great news is there are fish and lots of them. You may have to change the style and way you fish to keep on producing results, but the bonus is we really get to learn our fishery and it keeps our sport interesting.

I have been fishing the Coromandel now for 3 years pretty consistently with the objective of learning the movements of fish and their feeding habits. Things change from season to season just like every other animal and it just takes a bit of time to work them out. I am catching more and bigger fish this autumn/winter than the summer just past and the fishing is just starting to get really good. I don’t know if it’s a lack of boats on the water which means less noise, warmer water temperatures than normal, more food or what. Really I have no idea, however I do know that I’m having lots of fun and hopefully can help you out.

During the summer months the snapper in the gulf are pretty much everywhere and easy to find. Their bite times seem to be longer than in the winter. Now, I’m not a scientist but my understanding is the warmer the water and with the moving around they do, feeding has to be more regular and more frequent. During the winter they tend to hang out where there is large amounts of food. I also was under the impression that the little fish move out of the gulf and school up but I have found that there are still large numbers of 35-50cm fish in the Coromandel area through the winter so there goes that theory out the window.

Fishing sand and mud banks in the shallows of the Coromandel in the harbour and along the coast this time of year is well worth the effort. I have found that half pilchards are getting eaten where whole ones seem to stay laying there, the smaller baits seam to get the big hits and the big baits just get picked at. Over the last few winters I have been fishing in 8-10 feet of water and getting limit bags easily and most are between 35-50cm. It also takes about an hour of solid berleying to bring the fish on the bite and once they start it is continuous into the night. I have also noticed that the bait fish are there in numbers ~ kahawhai, mackerel and piper and every time we fish.

The time for snapper has been in the evenings however I haven’t fished for them often in the mornings as I have found this the best time for targeting kingfish. So with bite times only lasting a few hours and maybe only once or twice a day, it makes it easy to organise your fishing day to work out where and when to target certain species.

I have also spent some time hard up against the islands targeting big snapper and berleying up a storm along the rocky outcrops. So far no real monsters however I have caught a few snapper up to and around the 6-8 pound mark. The fishing can be quite slow but for best results I have found a small bait floated down the berley trail with fluorocarbon trace makes all the difference as the fish seem to be trace shy in the clear water. Try using kahawai, it has been producing most of our fish but only caught fresh. Any I have taken home and frozen and re-used the next weekend just dont seem to produce the goods.

With berleying along the island ledges while waiting for the snapper and kings to turn up I have had good numbers of Trevally swimming in the berley trail. There seams to be heaps of trevally in the area at present and it’s nice to have them coming over the sides for a feed. These fish are into devouring small messy baits with little hooks tied straight to the main line. Trevally are very under-rated in NZ. It is a bit of a shame they don’t grow to 100 pounds but they make great Sasshimi! I have hooked a few fish this year on 6 kilo that have really pulled string, but resulting in pulled hooks later into the fight, the soft mouth of the trevally can be a  bit of a problem.

Location for these fish are around the islands with good current. Get a good berley trail running and cubing up pilchards as well is a great way to get the fish feeding on what your offering, If you can stop and collect some pippies before heading out this will help as the old trevally has a hard time turning away a pippy floated down the trail. Also remember to back your drag off a bit before targeting these fish as to much pressure can pull the hooks, and loss of a good fish. Big trevally are hard to catch and just like all species it takes a while a learn their movements and feeding habits to fish them successfully.

When chasing kingies, plan your day as you will find that bait fish will be easiest to catch in the mornings. I have had days pulling my hair out watching kingies at the back of the boat knowing that if I had a live bait it would be all on. You should try and get a few different types - I have found Yellow tail mackerel, Yellow eyed mullet, Kahawai, Squid and Piper to be the best with the last three taking the cake. All of these should be easy to find in sheltered, still bays early in the morning. You will need a live bait tank, and a large one at that if you want a days supply of live bait, as room is required if you want to keep kahawai alive especially. Make sure the water is well aerated or change it regularly. Also don’t hesitate to try big live baits either. The bigger the better I say, the only problem being that they die more easily. The good bit is only big fish eat them, and who doesn’t want to catch a 80-100 pounder - all the big kings I have caught have been on huge kahawai or squid baits. I have spent days live-baiting around all those little rocks and little islands that jut out of the water around the Coromandel and time and time again have come up empty. My general rule of thumb is fish the big islands and the mainland. I have found they produce more current and tend to hold the larger populations of kings.

Try and find deep water with a bit of a point and plenty of current - most of these will produce fish but only at certain times of the day and sometimes you will see the same fish every 2-3 hours and on the 2nd or 3rd sighting he will nail your live bait. It’s interesting that the on the other passes it hasn’t shown any enthusiasm for a snack, so finding the bite time is a must if you don’t want to spend all day in the one spot. Once you learn the islands, it’s not hard to go from spot to spot knowing that the fish will be there at certain times. Generally the islands seam to hold large numbers of smaller fish, whereas the main land holds big fish with not many juveniles.

While most of the Coromandel doesn’t look as fishy as the islands dotted along its coast, I have caught 70 percent of my kings from the mainland. The current is stronger and the rocky out crops off all the bays have fish cruising around them. Again you have to learn the times that each point is fishing well and the good thing is its pretty regular so each time you go it should produce depending on the tides. I have also found that there is usually a population of resident fish and if you fish a spot one day, it sometimes takes 2-3 days for the fish to get back into their routine and return after being spooked. There are millions of ways to catch king’s, but the best way I have found is 2 meters of fluorocarbon trace about 80 pounds with a game swivel one end and a decent livebait hook at the other. For Kahawai use a 7/0 live bait hook or bigger, and for piper and yellow eyed mullet use an octopus 6/0 as they are lightweight and don’t drag the bait down.

Regarding gear, there are millions of options to choose from but I have found that the Gamakatsu hooks have a wicked hook-up rate and don’t break or bend. With balloons I try and use water balloons as I have found the wind drag can sometimes put too much stress on the bait. On very big kahawai I use party balloons and I just tie the balloons off on the top eye of the swivel as this will stop lots of tangles. Now you have your livie rig done, place your hook just in front of the top fin on an angle so the barb is facing forward. With piper, if there is low current they live better being hooked in the anal area.

When your livie goes over the side, the fun begins! Your livie is going to want to swim under the boat around the prop, boarding ladder, anchor or around the other lines that are out so watch for that.

Then when you get one set in a nice pattern and out the back of the boat, over goes number 2 livie. I have found it good to run 2 livies one out far and one in close, just to cover all bases. You have to keep an eye on them as the moment you look away they manage to find each other and twist up or find some part of the boat and it can be so frustrating at times. The best advice I could give is target kingies, and kingies only but if you’re going to fish a snapper rod as well remember when that livie gets pasted you are going to have to work fast – the fewer rods you have in the water the more you can focus on landing the kingie that’s just eaten your bait.

The "Kings of the Coromandel" tournament is almost upon us now, hopefully you have all been up the Coromandel honing your skills to take home some awesome prizes, and we will see you all on the 21 of July for registration.

Makeover for the Surtees 495 Workmate February 2021

Surtees have given its popular 495 Workmate a facelift...... more > 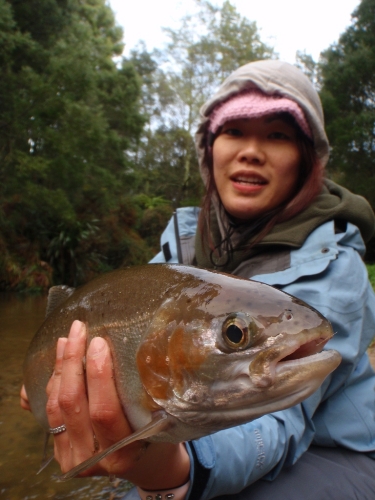