When land-based angler Daniel Fobbester won the hotly contested Century Batteries Beach and Boat fishing competition, a lot of people wondered how he did it, including my boss, Grant Dixon.

So Grant phoned ‘the champ,’ who generously suggested one of us should join him and his good fishing buddy Daniel Termaat (Daniel T) for a ‘hard-out session on the rocks’. He could even make it an overnighter! Grant was quick to take him up on the offer: “Our Deputy Editor Mark Kitteridge would LOVE to do that,” he said.

Grant was lying. While a rock-fishing expedition was indeed a welcome diversion, sleeping on jagged rocks in late autumn was far less enticing. But when I tactfully suggested to Daniel that a daylight expedition would do the job, he wasn’t having a bar of it: “Most of our big fish are caught in the dark. If we don’t stay the night you’ll miss the most productive fishing and never really understand how we fish.”

The message was clear: “Maybe you should harden up a bit, JAFA!”

So that is how I ended up meeting the two Daniels at Anglers’ Lodge on the Coromandel Peninsula at 7am. I’ve enjoyed stays at the lodge in the past, but this time we’d be taking advantage of their brilliant ‘rock-hopper water-taxi service’.

When the boys proceeded to unpack their gear, my healthy load appeared insignificant next to a growing mountain of bags, backpacks, chilly bins and bundles of rods. To be fair, this included two small tents and masses of Salty Towers-supplied bait and berley to share.

As usual, the Angler’s Lodge staff couldn’t have been more accommodating, placing a set of stairs up against Anglers Lodge II’s stern to make loading all our gear easier. In no time we were hooked up to the lodge’s tractor and chugging towards the boat ramp for launching.

I was very impressed by the 7m Anglers Lodge II: she travels nicely through the water and also proved well suited to her ‘rock-hopper taxi’ role, the reinforced plating in her bow sections enabling her to be nosed into the small, steep-sided ‘island’ of jagged rocks that was to be our impressive-looking home for the next 36 hours. Our skipper made it look easy, holding the boat steady with the motors as we passed our gear hand to hand to the safety of higher ground. Then, before we even thought about fishing, in went the berley – a big tick for the two Daniels’ approach so far.

I wanted to be a considerate guest, but my new friends showed no inclination to start fishing, instead setting up camp and organising all sorts of seemingly inconsequential things. So I excused myself for being selfish, baited up and cast out... 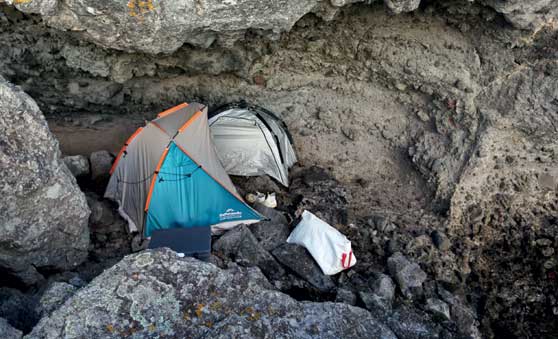 Bites were quick in coming and soon the first snapper was hooked, the first of many modest-sized fish we caught and released early in the trip.

Kahawai made their presence felt, too. Big and bruising, they ate everything except our very largest baits – usually one of their mates’ heads or mid-sections – and talk about fight hard! Consequently, most of our prime snapper offerings didn’t last long and we used a huge amount of bait in a remarkably short time. However, our big bullet tuna baits and mullet heads occasionally came back crushed and mauled following hard, thumping bites, so we persevered.

A little later some kingfish turned up in our berley trail: not big but still worthy targets, and while the Daniels had their eyes off the ball, I kept on snapper fishing… My persistence paid off with a couple of hard thumps transmitting up the line as something ate half a bullet tuna, followed by a steady run, and upon flicking my reel into gear the rod loaded up and line started peeling from the spool.

A surprisingly challenging fight ensued, and I had to exert more pressure than I wanted to at times because the snapper seemed determined to reach the safety of the reef, charging towards one dark, weedy patch after another. And just when I thought my fish was in the bag, it dived into a big clump of kelp and snagged me up. It was so close I could see the kelp fronds moving and a tail waving when I pulled back on the rod. And then another massive browny-coloured mass rose up alongside it. What the…?

No wonder my snapper had fought so hard! To my horror the shark began nosing around where my line disappeared into the reef, making the snapper struggle frantically. Feeling some movement through my line, I pulled back on the rod and the snapper came free! Wasting no time while the 100kg-plus shark tried to decide just how shallow was too shallow, I winched the fish in: not as big as I’d thought, but still a pretty decent specimen at around 5.5kg.

We realised just how close the encounter had been when the snapper was held up for a photo, with several shallow lacerations around the tail area gently bleeding. The fact this fish had just faced death twice in one day made its release afterwards even sweeter.

Fortunately, further potential encounters with our toothy friend ended when Daniel F hooked it, enjoyed a smoking run before being bitten off.

And so it continued: school-sized snapper and big kahawai interspersed with occasional big thumps and steaming runs on massive baits, but somehow none of the latter stuck.

Then it was dark. I can’t describe how weird it feels to stand on the rocks, way out in the middle of nowhere, casting baits into the black night and hearing them splash down into an even blacker sea. And while I don’t like fishing straight after the full moon (during the day, anyway), at least the ‘big spotlight’ overhead provided some much appreciated illumination.

Despite high expectations, nothing too spectacular happened, just lots more pannie snapper and brawling kahawai, with the latter becoming a welcome addition to our dwindling bait supply.

In between fish, flocks of sea birds swooped around us, so close I felt the flutter of their wings at times, while penguins scuffled around amongst our tents, quarrelling and squawking.

Other creatures were less welcome: headlamps revealed large crabs slowly dragging off whole pilchards and monstrous rats feasting on anything edible. Indeed, the rats were hefty enough and close enough to make Daniel F emit a high-pitched yell that sounded unnervingly like a woman’s scream! I was therefore thankful for the tent’s thin protective walls upon crawling inside just before midnight, while the two Daniels fished on doggedly…

Bloody rocks! They were so jagged that whenever I moved to lessen the pain in one part of my body, they’d attack me in two or three new areas. It felt as if I was being chewed up in slow motion.

Eventually I did sleep, waking briefly when Daniel T crawled exhausted into the other tent, and then at 4am when Daniel F woke me and suggested I get up for a morning fish.

I was sore all over and pretty knackered, but anticipation of dawn’s ‘magic hour’ encouraged me out into the blackness – at which point Daniel F promptly slipped into the vacant tent and bid us both goodnight.

Four hours later Daniel T and I admitted defeat, with only an apparently endless supply of pan-sized snapper and big kahawai to show for our efforts and the Anglers’ Lodge boat on its way to pick us up. But that’s fishing, and I wouldn’t have missed it for the world.

At this point it’s worth contrasting the Daniels’ approach to fishing the rocks with mine.

The reasoning behind their no-nonsense tackle is that when ‘the big ones’ are hooked (as happened during the Beach and Boat), they generally stay hooked, with the heavy gear able to hold the fish harder and/or drag them out of the weed if necessary. Should the Daniels’ gear snag up, they can apply brute force to rip it out of the kelp they’re caught on, or tip over offending rocks. Failing that, the hook usually opens up. This sees very few fish lost and left trailing tackle, and the reefy area isn’t left festooned with broken lines. I can also appreciate why the Daniels enjoy fishing at night: such heavy gear is less obvious in the blackness than during the day (which is when I did well).

My own approach is all about offering a relatively subtle, natural presentation. I rely upon the stretchy nylon to mask my presence when a wary snapper bites or runs off with the bait, as well as helping to steadily increase pressure so my snooded circle hooks slide up and set themselves in the fish’s jaw. Re-curved hooks also snag up less often than conventional hooks, thanks to their inwardpointing points.

While I understand the appeal of ‘baitrunner’-style spinning reels, I prefer free-spool outfits. This style of reel means I can easily release line in response to the pull of the tide, movement of the swell, or the tug of a biting fish. They also let me retrieve any slack line quickly and easily with a flick of the fingertips. In short, stray-lining success often depends on an angler’s ability to maintain control of 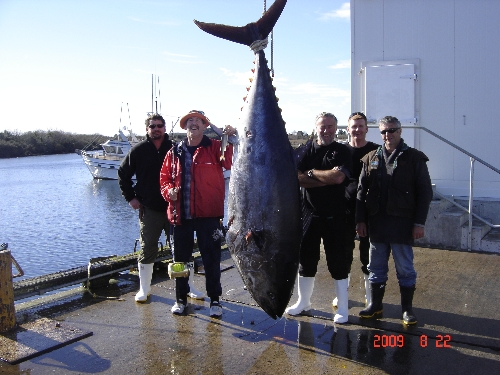