Writer Shane Hartstone says although we consider Australians the enemy when their Wallabies play the All Blacks, deep down we respect how passionate they are about sport – along with their beer and fishing – just like us.

After trying to sort out an Australian marlin-fishing trip for years, I finally made it happen. This saw me spending several days with a good Aussie mate who enjoys the same sort of things as me.

I had always wanted to see how the Aussies chased striped marlin, compared to how we do it, and see who was doing it better. The short answer is, they are...

I flew to Melbourne Airport, and was greeted by my mate Brian Mortensen, Aussie shooting champion and typical Australian (loves sport, beer and fishing). After gathering up some supplies, we then towed Brian’s six-metre Haines Hunter a staggering nine hours to Bermagui, New South Wales. For me, this meant a massive 21 hours of total travel – a big day.

We chose Bermagui, as Brian had been studying current charts and predicted that ‘the bite’ would take place here during my stay. (This was the first thing that is not common in NZ: predicting when a bite will happen.) We weren’t alone in our predictions either, with other boats from Melbourne and Sydney (400km north) also congregating at this small seaside town with a resident population of about 2000 people.

I discovered an average day goes something like this…

The alarm wakes us at 5.30. Soon after, we head down to Bermagui Bait and Tackle, the one and only tackle store in town. The boat is fuelled-up on site, while the staff cook you up a massive bacon and egg roll on two big BBQs setup instore, meantime providing all the info on what’s been caught and where, as well as the bait situation and the forecast. You can also purchase more baitfish sabikis and live-bait rigs, and even launch the boat across the road from the shop. 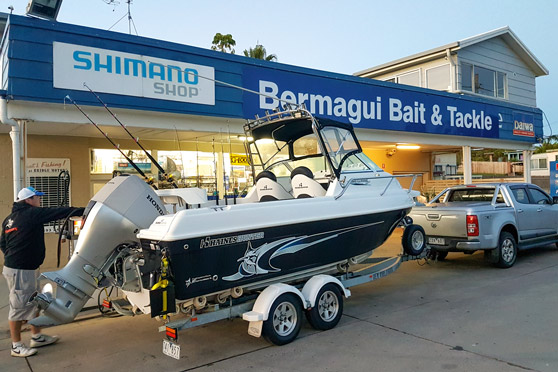 We launch at the main ramp, 400m down the road, and then make the whopping 250m run to the harbour entrance and on into the Tasman sea. Next, it’s hammers down to the 12-Mile Reef (actually only 10 miles!) to look for a baitfish school, which basically means looking for other boats). Sabiki flies are then dropped down, and up come three to four slimy mackerel soon after. This is repeated until the bait tank is full, enabling the fishing to start in earnest there – unless forced to look for more baitfish.

After that, we would catch three or four marlin and head home by 5pm (otherwise you might not get a feed at the local restaurants, as they stopped serving food at 8pm!).

I kid you not, that is a typical day for them. Jealous much?

The following are the main marlin-fishing differences I picked up on. Some are comical, some are smart, and some will leave you shaking your head. In no particular order, they are:

I never saw an 80W reel all week; instead, they like to use 30s, 50s and spin gear. A typical spin setup consists of a 1.8m (6ft) 15-24kg spin rod combined with a suitable size of reel spooled with 300m-plus of 24-37kg multi-colour braid. A bimini-twisted loop is cats-pawed onto three metres of 200lb hollow braid with loops at both ends. Another cats paw connects a small swivel, which in turn has 75cm of 150-200lb nylon bite leader, armed with a very small circle hook. 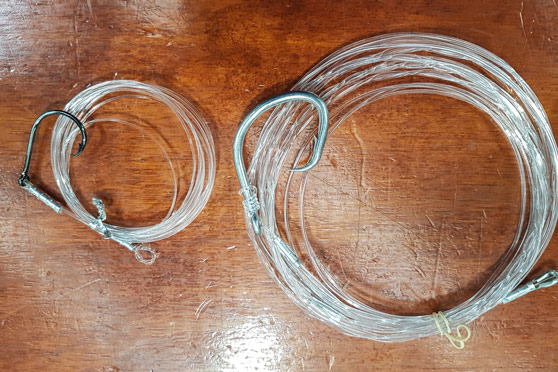 This setup is very easy to cast, has less drag in the water, and means the angler can theoretically wind the fish to the surface for tagging or gaffing without a crewman having to touch anything. (As the marlin has nothing sharp on its tail to cut through the 200lb braid, the only abrasion resistance required is provided by the bite leader.

Consequently, when a marlin is marked on the sounder, a sinker is rubber-banded onto the swivel and the live bait dropped down, with your braid colours (which generally change each 10 metres) counted so the bait is positioned at the required depth. Simple as, and it’s way-cool to fight a marlin on spin gear!

First of all, I believe I saw more baitfish in five days off Bermagui than I have over the last 20 years while fishing here in New Zealand. A good school of slimies (occasionally jack macks) would typically extend from the sea floor in 150m up to about 30m from the surface – that’s 120 metres of thick, condensed mackerel if there were predators present. You literally could not miss with the sabiki rigs.

Because there are no skippies or albies in this part of Aussie, the boats don’t have tuna tubes. Instead, they have mackerel tubes – miniature versions of tuna tubes about five centimetres in diameter. I can see them being useful in NZ for quick deployment of baits, too.

When rigging the livies, the difference in hook size and trace thickness between our respective game fishers is massive. In New Zealand, it’s not uncommon to have eight metres of 400lb trace crimped to a circle hook you could poke a tennis ball through. The Aussies use 3–3.5 metres of 150–200lb trace with a circle hook that Kiwis would use for snapper.

The lighter leaders enable the baits to swim more actively and allow the gear to sink more quickly.

These are the way moving forward. Once large baitfish schools are located (these can go on for miles), towing a couple of skip baits around is the usual strategy. They achieve a better hook-up rate than lures, ‘match the hatch’ (the same baitfish species are used as those making up the bait schools), and are cheap to make. By towing them along at four to five knots, the fuel burn is less, and the visual bites can be awesome! Lures are generally considered a last resort, with most boats preferring to steam between baitfish schools and then re-deploy the skip baits or live baits instead.

In my time at Bermagui, I would have seen or heard of around 150 marlin captures, with only three or four of them being on lures – and they’re cheap in Aussie, too!

Consequently, you almost get laughed at for catching a marlin on plastic, and if someone does catch one on a lure, no one asks its name, colour or size. Quite refreshing really!

Many of the Aussies love mako sharks – to the point they get really excited upon hooking up. A few anglers even got more excited than when connected to a marlin!

As a result, some boats would catch a couple of marlin, then say, “We’re gonna try for a shark now…”

Hearing this on the radio, I was dumbfounded; Kiwis avoid sharks like the plague when marlin fishing. We don’t want to waste our valuable marlin fishing time dealing with sharks, nor do we want to possibly lose a favourite lure or have to make up a new bait trace. But the Aussies – wow! Some of the guys were getting more congratulations on the VHF for landing a mako than a marlin!

And guess what? Because of NSW’s lack of snapper, albacore and hapuku, they gaff and eat the makos. With that in mind, I left an open invitation for them to come and live-bait the 60-metre mark at Raglan. Fill ya boots, fellas!

There is a misconception that Aussies only have small striped marlin and that the Kiwi striped marlin are bigger. I certainly believed this before my experiences over there. The truth is, yes, Aussie do have some small marlin, but there are plenty of big ones, too. We encountered/saw/heard of stripies and blacks from 60kg up to 140kg while in Bermagui. While they may not get the whopping world record stripies that NZ occasionally gets, the Aussies do crack off occasional monsters because they tend to fish with just 10kg and 15kg tackle. There was a significant difference in the marlin condition encountered over there, though. In NZ, it’s not uncommon to get a long, slender fish lacking in condition, possibly because our baitfish situation is not that great. In NSW, all the marlin are as fat as butter due to all the baitfish available. Plenty of food also means plenty of energy, and these chubby fish tend to go like rockets when hooked up!

Punters from out of town

When they hear the bite is on, Aussies hook on the boat and travel. We met fishos from Sydney down to Melbourne, and the big thing was that everyone was so nice. These guys would freely share knowledge on where the baitfish were, whether any marlin were around, and let you know when they were on a baitfish ball.

A common conversation on the VHF tended to go something like this: “Oh, hey, the black Haines Hunter just south of the Kink [a common fishing landmark], there are still three marlin on this baitfish ball. We just hooked two. Swing past our stern and drop ya baits there.”

I just about fell out of the boat the first time I heard a conversation like this, but it happened daily. Can you imagine this happening at the Ninepin Trench? Ah, no…

What adorable mammals they are – until they ruin your day’s game-fishing!

Picture this: three boats within 100m of your boat are hooked up. But every live bait or pitch bait you put in the water sees big mama seal coming over to pile on it.

Not so cute anymore – especially when you just spent the last 10 minutes rigging the perfect slimy skip bait. Demolished in just 10 seconds.

It would be okay if it only happened once, but one day we lost 10 baits in a row. We could not escape a pair of seals – they would follow us, knowing the sound of our motor, and hammer us when we deployed the baits again. Meanwhile, the other boats were catching marlin. (I was later told you need to cruise past another boat towing skip baits and ‘switch’ the seals onto their baits instead. Not a nice thing to do, but desperate times demand desperate measures!)

So, what did I learn? First, we should drop down the size of our tackle and enjoy catching marlin more. Monstrous blue and black marlin are rare, so why gear up heavy enough to handle them every time?

Also, we rely on lures far too much in New Zealand. We need to learn how to catch, look after, and prepare live baits and skip baits, then use them in areas we know or believe have marlin present.

Finally, I must say that while we have the wood on them as far as the Bledisloe Cup is concerned, we can definitely learn a few things from these guys about catching marlin more effectively…

[INVALID] Maxwell winches and anchors have been designed and Manufactured in New Zealand for 50 years and is a world-leading brand toda... more > 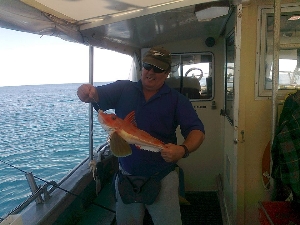