When travelling overseas to fish, most anglers are looking forward to catching new species – and if they happen to be big, too, so much the better. That’s why Kiwi angler Brian Salvigny and his three buddies were so rapt to have visited Exmouth, Australia, earlier this year…

The alarm went off at 3.30am. Many a fishing trip had started this way, but this time two mates, Quinn Brady and Brad Roberts, were waiting in the driveway soon after, their bags loaded. Then we headed off to pick up Ryan Webber, the fourth crew member.

All four of us were packed with the essentials, including our respective Shimano Stella and Saragosa reels, in expectation of some great action across the ditch in Exmouth. Known as a fantastic bill-fishery, Exmouth can also produce some quality top-water fishing for giant trevally (GTs), coral trout and other species.

An overnight stay in Perth was followed by a short flight to Exmouth, where Brendon Hawker – charter skipper and friend – met us at the airport. Next, we were taken to Innkeeper, a 13.4m O’Brien gamefisher, our home for the next five days. Here, we were introduced to the deckie, Paul (a great Aussie character), and we were ready to go.

Over the first couple of days we poppered and stick-baited some islands out of Exmouth, also towing Rapalas between islands, picking up a Spanish mackerel, some golden trevally, a few gold-spot trevally and a coral trout in the process. Another early morning on day three saw us throwing poppers at a bommie only a few hundred metres from where we anchored. Our first casts attracted hook-ups for Ryan and Brad, resulting in a double of hard-fighting GTs, followed by a gold-spot for Quinn and a golden trevally for myself. We drove away from that rock anticipating the start of a good day.

At the next rock Brad pulled another GT out of the shallows, before we moved on to a long, reefy area, where we took turns casting a mix of poppers and stick-baits into the reef wash. As most of the water was only five to eight metres deep, our drags were done up to near maximum.

This area resulted in another eight GTs for the day, including one of 35kg, the biggest of the trip, which I caught. Amazingly, most of the fish were taken on one relatively small Williamson Jet popper, with pink stick-baits being the runner-up. Hidden behind an island group that night, we all enjoyed a swim in the 30.2-degree water, followed by a good sleep in the calm.

Our penultimate day started like the previous ones, with Quin getting the first GT of the day this time. Weighing around 30kg, it was a fine specimen.

Soon after, a shout from Brendon on the flybridge alerted us to a spectacular display. Some GTs had herded a school of baitfish into a gut between two rocks and were now busting out of the water, feeding up hard. Seeing those 20kg-plus GTs savagely feeding is something I’ll never forget. 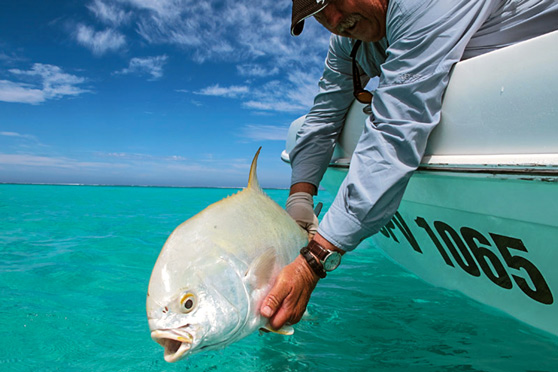 Better still, I then hooked and landed a big estuary cod, which had a fight to match any of the GTs.

A couple of rocks later, Brad got smoked into some foul and lost the magic popper that had accounted for nearly all the fish the day before. He was gutted!

So, tying a large stick-bait on, he cast again – for the same result: smoked into some foul and busted off!

I don’t blame him for sitting the next 30 minutes out, feeling bummed about the lost fish and gear.

Motoring out to a new area of reef, we came across some birds, so cast some lures into the activity. A few pulls on a stick-bait saw spanish mackerel leaping out of the water fighting over it. Our eyes were wide open yet again, and we let out a chorus of ‘yee-haas’ – crazy stuff!

The end result was a shark mackerel coming to the boat on a popper, adding to the species count.

Later that afternoon, we stopped for a quick swim followed by a meal, mulling over the two crazy days we’d just experienced. Our total was an impressive 21 GTs (with only three bust-offs), along with several other trevally species, coral trout, shark mackerel, estuary cod and wahoo.

So, completely rapt with our trip already, the call was made to travel most of the way back to Exmouth so we could troll lures for the last day.

We woke up on the game-fish grounds and had a quick jig over some sign in 70 metres, but with no luck, so out went the trolling lures, attached to our casting outfits, with the drags set to 5kg.

The full spread hadn’t even been set when a black marlin cruised into the gear, but didn’t bite. Then, ten minutes after the lure pattern had been set, we had a hit on the shotgun, resulting in a sailfish hook-up and a great aerial display. After bringing it to the boat and with photo opportunities fulfilled, it was released and the lures reset.

Jokingly, we informed the skipper that, as none of us had ever caught a black marlin, one each would be acceptable!

“No problem!” he said, similarly tongue in cheek. But the joke took on slight credibility when a second hit resulted in a black marlin for Ryan (as well as a wahoo soon after). Next up was a wahoo for Brad, and he was still on strike then the ‘rigger tripped again, this time to our second black marlin, which was duly tagged and released as well.

All this and it was only lunchtime! The next few hours were uneventful, and then a hook-up and a short fight for Quin, only for the hooks to pull.

Thirty minutes later and Quin was back in the action, attached to a feisty black that put on a spectacular display. It proved a real handful, racing ahead of the boat, but some good work from Brendon at the helm kept us in the game. Eventually, it was brought close to the boat, but it hadn’t given up, making two more aerial runs across the surface before finally accepting some plastic ‘jewellery’. Estimated at 80kg, it swam away strongly.

At this point we all looked at each other, thinking that the ‘four marlin, please’ quip might possibly come true.

Consequently, no time was wasted getting the lures back in again, and within the hour we had another hook-up – but, disappointingly, this fish dropped off.

Then, 30 minutes later, we got a second chance, hooking-up yet again. A short five-minute fight ensued before a small black marlin (but still a black!) was tagged and released – and I was finally on the board, too!

What a buzz – I can’t tell you how much fun these fish were to play on spin gear with light drag settings.

Our scorecard on the last day was as follows: 7-6-4 (seven strikes, six hook-ups, and four released) on black marlin; 1-1-1 on sailfish; plus two bonus wahoo.

No wonder high fives were everywhere and beers got cracked as we hauled in the gear and headed for land! 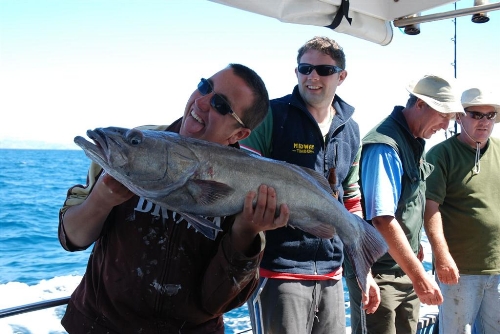