The tropics are great: warm to hot weather, clear water, a huge variety of fish species, and with challenging fishing in a variety of conditions. It’s usually windy at least half the time, creating some interesting scenarios.

Probably the most challenging fish I’ve caught on fly would be a West Australian permit (snub-nosed dart) I landed at Ningaloo Reef, just west of Nor’west Cape.

At the time, I was fishing with top guide Jono Shales on his purpose-built saltwater-fly boat just a few kilometres from the boat ramp. Here, the lagoon is encircled by a high coral reef, with the waves crashing to whitewater before surging into the lagoon itself. The water was a clear, azure blue.

We scared several fish in the shallows as Jono ran the boat at speed down the lagoon to his selected area for the day. Once there we slowed and looked for signs of life.

The chosen spot held several stingrays and, just like New Zealand kingfish, the area’s top predators had hooked up with them. Sometimes two or three fish were with each ray, but more often just one.

Our problem was to get the boat into a position where I could accurately present a large prawn imitation tied with a bit of weight to the fish beside the rays. That added weight, combined with my fast-sink-tip fly-line, was just enough to penetrate through two metres of water so the fly reached the fish on the bottom.

We had a big current running and a wind that scooted us along like a sailboat at times, making fishing a challenge. I persisted, but a messed-up or inaccurate cast would see us sailing past the target. Getting back into position often took another ten minutes.

Eventually I got it right and set the hook into a hard-fighting spangled emperor. This was a new species for me and an unlikely looking fighter, but fight it sure did; I was thrilled when Jono finally lifted him out for a photo.

Half an hour later I got my ducks in a row again, the line pulling tight on another solid fish. It stayed deep and circled the boat for ten minutes before I could get it up and see what I had: another new species on fly for me – a gold-spot trevally. After taking some pics, it too was released.

The wind increased further, making the water choppy and the fishing extremely difficult. Every time we approached fish we were blown away, with more valuable time lost getting back in position. I also stuck a fly in my back while casting across the wind, and tangled the line around my feet a hundred times. However, I knew I just needed to relax, maintain the best-possible line management in the circumstances, and wait for my chances.

We found a new ray and drifted in from behind. The ray and the fish I could see accompanying it were facing away from us. This was a good chance. I made my cast from 20 metres out, and while stripping in line, barely keeping in touch as we drifted up along it, I felt the line tighten – a fish had it. Stripping hard with my left hand in response, once, twice, three, four times, it felt like I’d caught the coral. But hadn’t. Instead, I’d pulled the fly into the mouth of the fish of my dreams.

I didn’t know what I’d hooked for half an hour, with the fish running well out and staying deep. Initially we followed it, then drifted as I worked on retrieving the line. It was an epic struggle that took time and distance. The fish must have circled the boat 30 times before it lay over and gave up. I nearly fell overboard when Jono lifted it out – a permit, and a bloody beauty!

Jono was excited, too. This was the first permit from Ningaloo for his boat. Even so, a quick photo or two and back it went.

The next day we struggled to catch any fish off the rays; they just weren’t there. And when at last we found a couple, they proved hard to approach, this time because it was quite calm.

A couple of hours in, I was on the casting platform when a ray approached with two big fish alongside. I was able to make a good presentation to the ray, and one of its escorts peeled off to inhale the fly. Two solid left-hand strips saw us off down the lagoon chasing another powerful fish. Jono suspected it was a big golden trevally; I was thrilled whatever species it was.

Again, the fish stayed well out and deep at first, then slowly came in, circling the boat for half an hour. At this point I suspected I knew its identity, but even so, when Jono lifted out another permit, bigger than the first, I could hardly believe it.

While these captures may seem easy in the retelling, they were actually very technical captures. Boat drift, wind effect, sun angle, current, distance and depth, made these two captures really special for me. There was no, “There’s one, cast now!” Rather, a whole series of events and circumstances had to come together so my fly ended up in front of these fish.

I loved it: the 60 casts between bites, the tangled lines in the wind, standing on my line when making the final presentation, the hook in my back – it was all part of the experience. For the first one, I was on my knees just to stay in the rocking boat, but I can still feel the line tightening as I set the hook.

[INVALID] Maxwell winches and anchors have been designed and Manufactured in New Zealand for 50 years and is a world-leading brand toda... more > 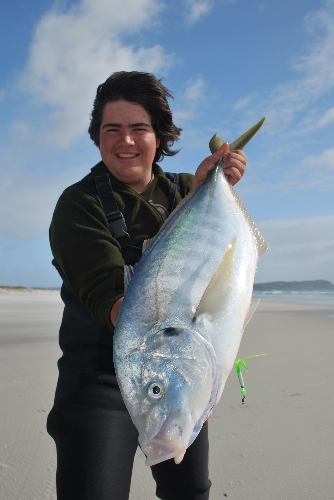