Barramundi on the fly by Ron Giles

‘Daintree Dave Fishing Expeditions’ proclaimed the sign by the ferry landing on the Daintree River in Northern Queensland. I made a mental note to remember that name and ask my motel’s proprietor if he was to be recommended as a fishing guide.

"Oh you mean Dave Patterson" replied my host when Sue and I checked into the eco-lodge (environmentally-friendly-style motel) half an hour later. She reached down and pulled out a brochure from the rack by the reception desk. I glanced down the brochure which detailed the range of fishing available and my eye was caught by the words 'fly fishing'. A quick phone call to Dave Patterson confirmed that he did indeed offer fly fishing trips and a booking was made for the next day. I had been keen to try a bit of barramundi fishing during our holiday in Queensland and our few days in the Daintree Forest looked the best chance. The possibility of using fly tackle made it an even more appealing prospect.

The next morning saw us back down at the ferry and introducing ourselves to David Patterson. It turned out that his family ran the popular Daintree River Train that departed from the private jetty alongside the ferry landing. That's where we found Dave's sturdy 5.5 metre aluminium boat. A yarn with Dave on the way up the river revealed that he had some 14-years experience fishing on the Daintree. Before that, Dave had been crewing on prawn boats and trawlers. That hard life ended when he visited the Daintree area after his family moved there 15-years ago. He never left. Dave has concentrated on fishing trips for the last few years, one of only two such operators on the Daintree.

The river is situated a couple of hundred kilometres up the coast from Cairns. The surrounding forest is one of the oldest in the world, being part of the original Gondwana Continent when Asia and South America were all joined together millions of years ago. This has resulted in one of the most biologically original and diverse areas in the world.

The Daintree River is a large flood-prone river that’s suitable for boat fishing only – not only because of its size, but also thanks to the large crocodile population. In the evening, many of these reptiles can be seen moving up the river to feed in the tributaries. It was in one such tributary near Daintree Village that a woman was killed by a big croc a few years ago while swimming on New Year’s Eve.

The river holds an astonishing variety of fish – over 200 species in fact. Dave advised that his best day ever was when they landed 35 different varieties of fish. The main targets are, of course, the elusive barramundi along with the even better tasting mangrove jack. Other good sporting Daintree fish include trevally, fingermark and bronze whalers. However, the best for full-on fishing action would be the tarpon similar to those legendary fish found in the Florida Keys. The day before we went out, Dave's party landed two of these famous fighting fish.

Dave's boat was well equipped for fishing, with a bimini-top and plenty of fishing room. We took off up the river just on the turn of high tide. The weather was misty and cloudy, and looked like good fishing weather. We pulled up at the first spot and Dave rigged me up with a prawn imitation on his Shakespeare 8-weight fly rod. It wasn't quite the quality of some of the fancy trout rods around, but was adequate for the job. Dave gave Sue some pointers on spinning while I cast away. There was quite a breeze blowing up the river making casting rather difficult, so it was necessary for Dave to keep the boat close to the banks so I could reach the edge.

The technique was to cast to any obstruction such as logs, foliage, overhanging banks, etc – much like fishing for brown trout back home. I had a floating line on, but I suspect a fast-sinker might have been better. After letting the fly sink, a normal strip-retrieve was used to bring the shrimp imitation back with a jerky action. When nothing came to the fly after 15 minutes we moved on. Dave said he would try and get me out of the wind and we went around a sharp left-hand bend. The bank for the next 100 metres looked like great water (well, trout would have loved it anyway). Dave attached a weighted prawn lure to his baitcaster and proceeded to chuck this around with nonchalant accuracy to within a couple of centimetres of the bank – or log – or bush.

On the third cast, just as he was about to retrieve, he swiftly lifted the rod and a small silver fish leapt into the air. 'Barra!' said Dave triumphantly. A short but strong fight ensued, and a few minutes later the beautiful silver fish was in the net. I had never seen a live Barra and its gleaming chrome flanks reminded me of a sea-run brown from a Canterbury river.

Dave thought I would do better with the successful prawn lure, as it was much heavier than the one I had been using. I tied on the weighted lure and cast into the bank with a very open loop. It was not long before the lure stopped just into the retrieve and a fish was on. There was not much of a fight before a small mangrove jack came to the net. We admired the attractive markings of the pretty dark-coloured fish while Dave told us this was his preferred eating species. Freeing the fish, I resumed casting.

Wham! Something much more solid hit the lure. A couple of jumps revealed it as a good size barra. (By ‘good size’ I mean good for a fly rod considering that barramundi can go up to 30kg and such a specimen might prove to be too much for a flimsy fly rod.) However, this fish quickly tired and was soon in the net. By Dave’s estimate it weighed around 2.5kg – a good result.

Dave explained that the fishing had only just improved as the barras were very lethargic in winter and only came on the bite in spring. The best months are October to February, but after November 1st, all fish caught must be released. Fortunately for us it was only mid September, so this one was despatched to grace the dinner table later.

We carried on fishing using a variety of shrimp and prawn lures, and even a Dave Whitlock popper, but nothing more came to the fly. Dave caught another couple of barramundi on the spinning rod but it seemed that as the sun got higher, the fish went AWOL. As we were fishing in quite shallow water along the edge of the river, it made sense that the fish would retreat into the deeper water as the sun exposed their shallow lies. Soon it was midday and time to race off down-river and return to our car.

It had been a most pleasant morning; not only had I caught my first barra, but I’d done so on the fly as well. The chef at the Coconut Beach Resort cooked the fish the next night and we were the envy of the restaurant when the huge platter was brought to our table. What a sight! We just wished we had taken our camera to the dinner. And the fish? Absolutely delicious!

The Daintree area is an easy two-hour drive from Port Douglas or four-hours from Cairns. Accommodation ranges from backpacking up to luxury 'eco' lodges charging over A$200 per night. There are a wide variety of things to do, including bush walks, 4WD excursions, Barrier Reef trips or just lazing around on deserted beaches. It is the sort of country that is a light year removed from the downtown jungle of Sydney or Melbourne, and so much more appealing to environmentally keen Kiwis.

Ron has a web page at www.troutnz.com

[INVALID] The FG knot is strong and practical. Here, Mark Kitteridge walks us through the FG knot tying process.... more >

Trout fishing in the backcountry wilderness can yield trophy trout, but these dangerous gorges also require care and caution.... more > 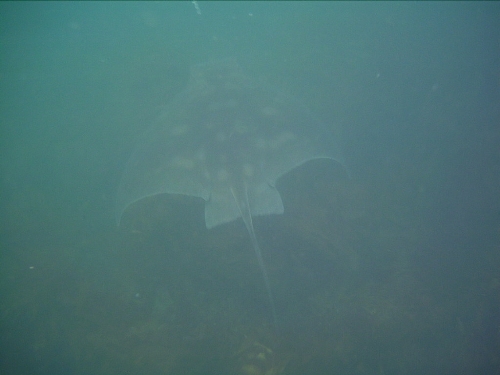