On a recent trip to Vava’u, Tonga to host the annual NZ Fishing News readers’ tournament, Grant Dixon was lucky enough to score some yellowfin tuna steaks to bring home.

On the second-to-last day of the event the Black Sheep team, of which I was a member, had drawn the boat Monu’la, skippered by Pook Toomey.

Our team had enjoyed a good run and had caught several yellowfin to 66kgs on previous days, and this continued with Pook when we landed, among other things, a 47kg yellowfin to Cheryl Leonard.

Pook carries ice on board and the tuna was bled then placed in an insulated bag surrounded by plenty of the cold stuff.

I would normally gut and gill the fish and pack ice into the resulting cavity, but because it was a competition and we were in the running, it was kept whole.

After weighing, it went back into the bag before it was processed, bagged then chilled down.

On our way to the airport we picked it up, wrapped it first in paper towels and then bubble wrap – a great insulation – and placed it in a chilly bag with slicker pads, checking it into the hold as cargo. Airlines frown on fish being transported as hand luggage, regardless of how well it is packed! I can understand this, having seen fish blood dripping from the overhead locker due to poorly-prepared fillets being brought back to New Zealand from a Pacific Island!

Getting it through NZ border control back on our shores is not problem. As it is a saltwater fish, their philosophy is “if it can swim here, it can fly here”. It’s a different story for freshwater species though.

A great tip I learned in Hawaii on a recent trip there with Tony and Bea of Offshore Adventures was the use of paper towels to cover the slab of tuna loin when storing it in the fridge. These absorb any moisture and keep the tuna – or any other fish for that matter – in pristine condition.

Like all fish, the more effort you put into the care and preparation, the better the eating quality.

The following is a simple yet tasty recipe I use for several tuna species, including yellowfin, bluefin and albacore.

Tuna is best eaten medium rare and cooked on a very hot skillet or barbecue plate. You don’t need oil on the plate; the oil in the marinade will be enough to prevent the flesh sticking.

Sear either side of the fillet, leaving a rare strip in the middle. This will ‘cook’ as the tuna steak is left standing prior to plating… 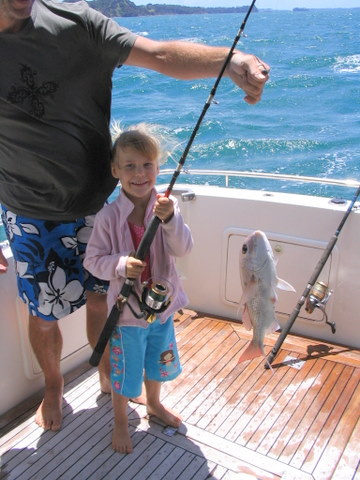 The joy of landing your first keepable snapper. - Kawau Bay