The Latest in Topwater Fishing Gear

Lure fishing for a variety of species is enjoying a sharp rise in popularity, no more so than targeting the likes of kingfish with topwater lures.

Casting poppers and stickbaits to schooling fish, around reefs, off the bricks and close to structures such as channel markers makes for some great sport where doing the hard graft can pay dividends. The bite is visual and often spectacular, followed by a tough scrap that will test any imperfections in your knots and tackle.

In between COVID lockdowns and easterly weather patterns, various members of the NZ Fishing News crew and friends took sets from four of the country’s popular tackle brands – Okuma, Penn, Shimano and Daiwa - and put them through their paces.

Please note we have included the distributor’s Recommended Retail Prices (RRP) . Prices listed in the various stores may differ significantly depending of what special offers, especially for combos, may be available at the time of purchase at retail level. 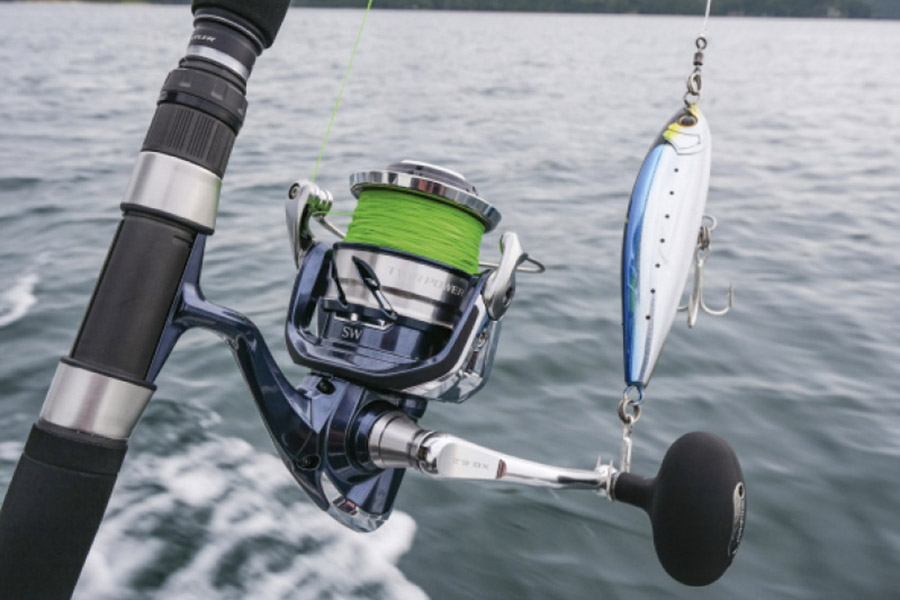 The Shimano Twin Power SW 14000 SG has the horsepower to put the heat on even the biggest adversary with a rated maximum drag of 25kg.

This combo was put to the test when managing editor Grant Dixon and charter skipper Tony Orton fished the Whangarei harbour entrance channel buoys. The fishing was hard, but Tony hooked a decent kingfish which the combo made short work of. The true test came when the kingfish was dealt to by a bronze whaler shark which became hooked itself. While it was a relatively short encounter before the trace was bitten through, it did show the potential of the reel’s drag and the lifting power of the rod. The combo was easy to cast, even when loaded with lures that went beyond the recommended weight of 120g.

The rod and reel were well-matched and Tony, who says topwater fishing is his favourite angling style, was impressed with the reel’s performance and intends ordering some for his operation. He suggested the reel offered many of the advantages of the top-of-the-line Stella’s did, but without the bigger price tag.

We felt the graphite rod was particularly suited to work stickbaits with a nice tip action that also cast well. There were some initial issues with wind knots and tangles due to the spool being well overfilled. Stripping 50 or so metres off made all the difference. 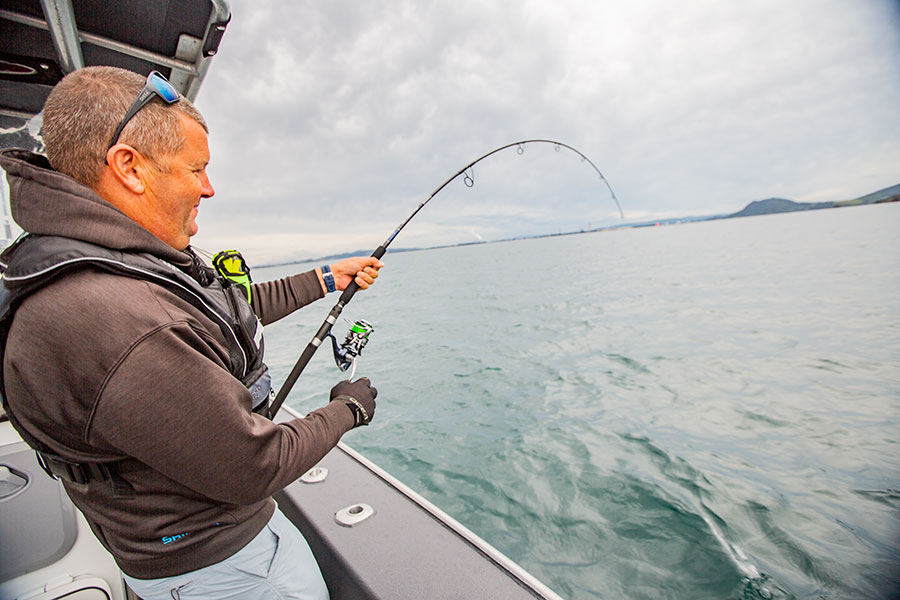 Tony Orton found himself hooked first to a kingfish then a bronze whaler while casting stickbaits around the Whangarei Harbour channel marker buoys. The Daiwa 20 BG MQ reel is nice and compact, while still offering plenty of stopping power.

Daiwa have provided an extremely compact option that undoubtedly provides value for money. Deputy Editor Ethan was fortunate enough to find some fish feeding on the surface and used this rod to pull in a couple of Hauraki kings. Before he even hooked a fish, he enjoyed the effortless casting. The reel is very compact for its power, and despite being a capable match for kingfish, can be repeatedly cast without tiring the arms. When hooked up, the drag was smooth – and even better, the scream sounded fantastic as line whipped off the spool. The rod also had enough backbone to pull fish away from the waiting sharks and bully kings to the boat. The reel/rod combo is very balanced and – if you’re that way inclined – extremely photogenic.

Grant Dixon fished the rod in Bream Bay, casting 80-100g stickbaits at the channel markers and around other structures. The features for him were the ease of casting lures this size. Getting a good distance was effortless and the rod had plenty of sensitivity, adeptly working the lure for a couple of hits, several follows but no hook-ups. The combo represents good value for money. He particularly like the foregrip that while shorter than some rods, its ridged construction offer sure grip on a day that was wet. 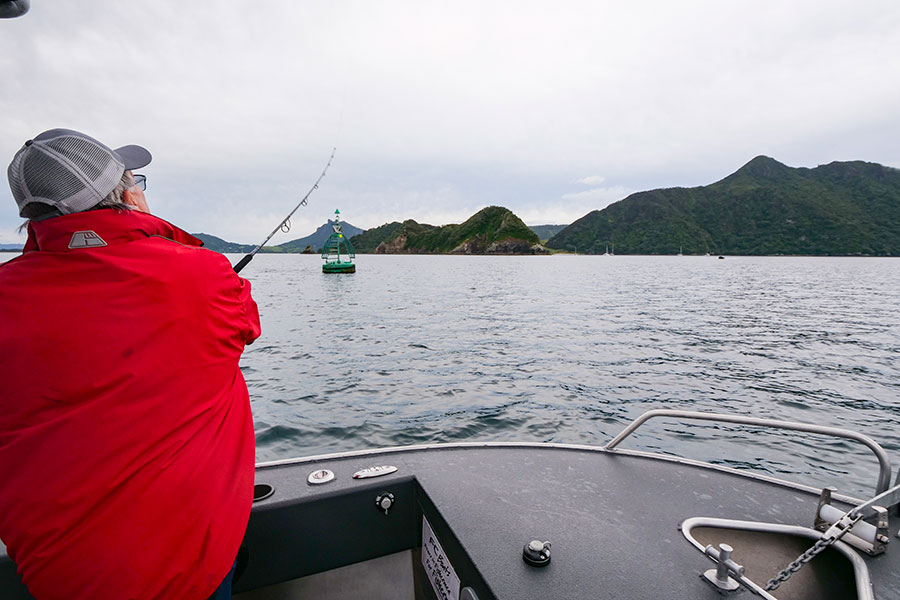 We found the Daiwa Saltist Hyper Stickbaiter loaded up nicely to provide plenty of casting distance, even for relatively light lures. We used the Penn combo for not only casting stick baits, but also horizontal jigging.

Simply going by its price range, the Penn Battle III could be considered an “entry level” topwater reel – but Ethan’s experience suggests otherwise. It is larger than some of the other topwater reels in it’s class, but this also means increased line capacity and a comfortable handle. When hooked up, the reel performed admirably, comfortably dealing with a couple of moderate sized kingfish. You’d be hard pressed to find a reel in that price range which can so comfortably account for topwater kings. It is a little heavier than some of the other reels, but it is bulletproof with it’s HT-100 waterproof drag.

The Ocean Assassin rod was a good match, enabling plenty of casting distance. The extra length also provided plenty of leverage against the kingfish, as sharks were circling the area. It’s worth nothing that one kingfish did get sharked while hooked up on this combo, and a five-minute fight with a solid bronzie ensued. The drag was smooth despite line pouring off the reel, and the rod was powerful enough to turn the shark’s head. This showed us that it could definitely handle the big topwater kingfish found on some of the more remote NZ reefs. 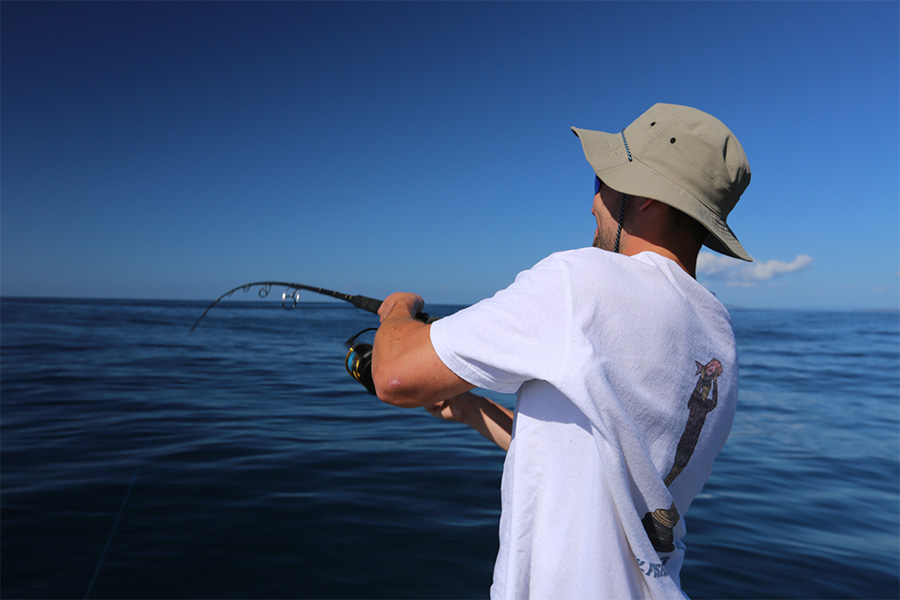 Josh Rudd and the Penn combo were hardly troubled by the john dory that took a liking to his offering.

Reel: Dual Force Drag system has drags both above and below the spool to apply even pressure. The pre-set feature allows for precise drag setting so you can customise to suit your fishing style. Hydro Sealed body to ensure internals are protected from corrosive salt. Dual anti-reverse to ensure full, solid engagement. Cyclonic Flow Rotor (CFR) is designed to create “cyclonic” airflow, which significantly increases air flow through the ported rotor. A wet Carbonite drag system features Cal’s drag grease for low start up inertia and extreme heat protection. A feature of the Makaira reel is the ability to set the drag with precision.

This combo is definitely one that is deserving of the title ‘high end’. The Makaira reel finds a great balance of drag power, but also precision. As well as a traditional drag rotor knob, the Makaira also offered a drag tensioner, allowing the angler to adjust their drag as you would with an overhead reel.

The Haku series of rods has been tested all over the country on everything from big kingies to massive deepwater bass. For Editor, Miah, it was not the mass grunt that was the biggest draw, but the casting action.

“This rod was a great balance of low down power to lift a fish from the depths, but also fast action at the top to really fire a stickbait out at a target. I don’t have the most upper body strength, but comfortably cast this heavy weight rod over and over. The Winn grips were comfortable and stayed grippy even when wet.” 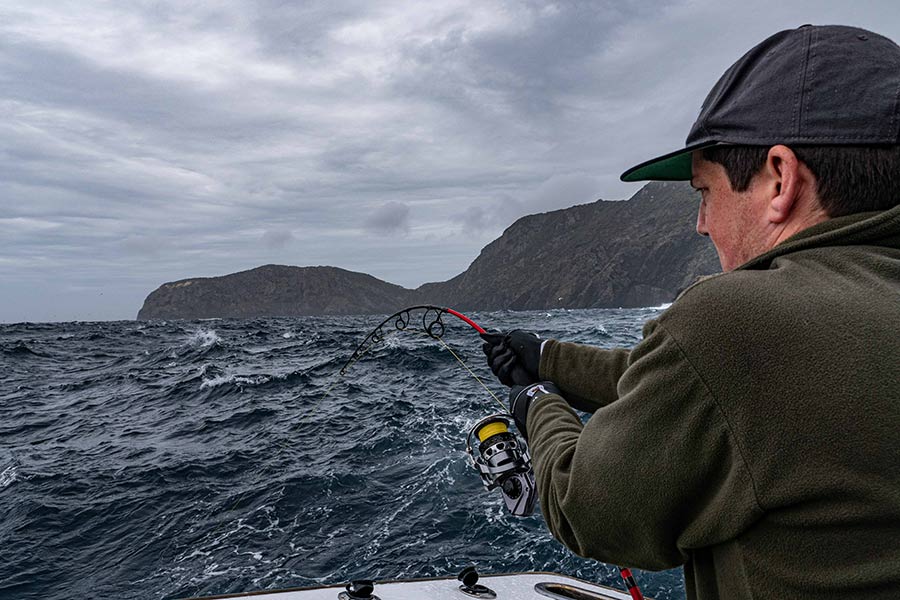 Bryce Helms, on an earlier trip, had the Makaira Game Spin 10000 matched to a CD Haku Jig rod, accounting for some respectable Three Kings kingfish. me and the boys - channel island