Milton Frear distributes a range of drones, including the Splashdrone 3 Plus and Fisherman Pro models which as the name suggests, are ideal for running a multi-trace backbone out to where the fish are.

When he called at Waipu Cove, it was a great morning for flying, but not so much for fishing. There was hardly a cloud in the sky and the winds were light.

Armed with a Splashdrone 3 plus model, we headed down the beach mid-morning, away from the swimmers and surfers, before finding and a nice little gutter created by the current.

This was the first time I had made a serious attempt at ‘drone fishing’, although I had kite and electric torpedo fished the same area before. To say the least, I was intrigued.

My job was to pick up some squid from the local Top catch store, Milton had everything else.

His ‘tackle’ consisted of the drone nicely and safely packed away in a carry case, a Shimano Tyrno 20 reel spooled with around 450 metres of 80lb braid and matching 15kg rod; a packet of 10 Target circle hooks and traces;  and a coil of longline backbone to attach them to.

The drone was brought out of the box; the props attached; battery added; the landing gear attached; and the controller fired up. That’s where any sense of normally and fathomable actions ended!

Milton began going through this little ‘dance’ where the drone was flipped this way and that, then twirled through 360 degrees – it looked like a line dance on steroids.

My quizzical look was greeted with ‘just orientating the GPS’. ‘

Okay Milton, what ever does it for you’ was my reply. 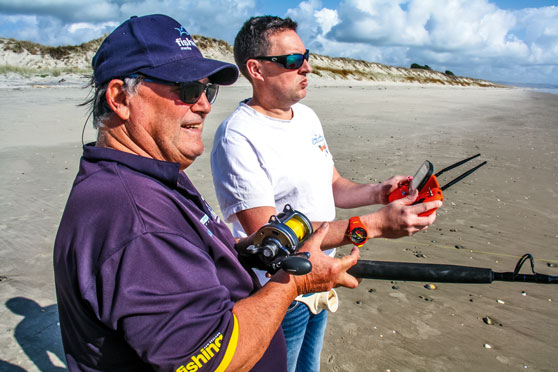 By the time the beach tango had ended and all systems, including the release, had been checked, I had the 10 traces baited with the squid and laid out neatly on the sand. A six-ounce sand anchor had been added to the end of the backbone which was now attached via a short loop to the drone. With the other end of the backbone clipped to the braid, we were ready to deploy.

‘Just keep a steady pressure on the spool to prevent any over runs’ I was instructed as the Splashdrone rose to a height that saw the last bait a metre of so above the beach. With the flight altitude set, Milton steadily flew to line out to sea while I controlled the line.

A couple of minutes later we were over the drop zone and a flick of the release switch saw the backbone plummet into the water.

Another touch of the controller and the drone was in ‘fly home’ mode, coming to a hover at the pre-set drop height it had set off from before Milton expertly brought it to ground.

Taking up the slack in the line, it was not long before the tip of Milton’s rod indicated multiple inquiries, followed by something decent hooking up. The line had the thump of a decent snapper, easily felt through the no-stretch braid. 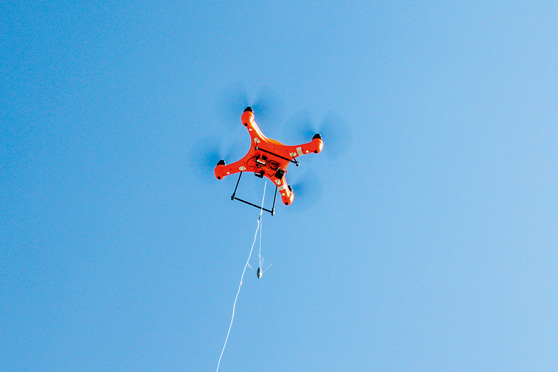 Putting a bit of pressure on and with a decent bend in the rod, Milton retrieved a few metres of line before everything went slack. Unbelievably, the 80lb braid mainline had parted, possibly due some previous abrasion. Our ‘money shot’ had escaped, but it indicated just how effective this form of fishing could be.

I have to say I was impressed at the potential drone fishing offers.

Back at the caravan and reflecting on what might have been, Milton ran over the features of the Splashdrone… 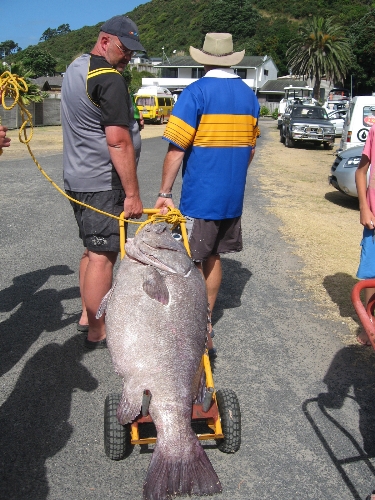