That’s a pity, because although stickbaits are lethal on kingfish, I firmly believe there should always be someone working a popper at the same time when chasing kings. After all, the sound and disturbance caused by a good popper sounds like a predator smashing baitfish on the surface, ringing the dinner gong for any large, hungry, baitfish-eating species nearby.

The sound brings them racing over to investigate, and they often find a popper sitting motionless amidst what’s left of the splashy ‘bloop,’ an apparently injured and vulnerable bait fish. Crash!

They gobble the popper and are hooked – or, alternatively, they shadow the splashing popper as it’s retrieved providing an opportunity for others to present stick-baits. Either way, the effort is worthwhile.

Without a noisy popper to attract predators in close enough to see them, even the very latest, greatest and most expensive stick-baits are not fulfilling their full potential.

I decided to upgrade my popper-fishing rod a few months ago and my requirements were simple: I wanted a rod that was firm enough through its length to effectively work a popper, but not so stiff it would kill a man (somewhat past his prime) while fighting a large, tough fish. In short, I suspected a PE6-8 rod with a relatively fast action was needed.

The result was the Shimano Ocea Plugger S83H, 8’6” in length and suited to casting lures to 130g, rated to PE6 line and 12kg (max.) drag pressure (however, there was also a bit of a wink and a “but it should handle even 80lb, despite the labelling…”). 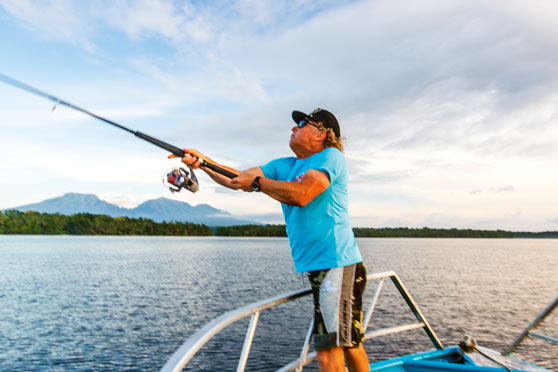 Out in the ‘field.

It’s now five months down the track, and I’m over the moon with the Plugger, which has proved perfect for my needs. Funny how unintentionally leaving it behind in New Zealand at the start of an important overseas trip turned out to be a good thing. It meant I had to use a perfectly serviceable ‘loaner’ rod for four days, and it did the job okay. But when I finally got my missing rod tube and contents back, I put the two-rod sections together, screwed on a big spinning reel, armed the 100lb trace with my favourite Halco Roosta popper and cast out – for miles! Great start!

Next, keeping my rod tip down, I stabbed the Ocea Plugger rod backwards to activate my lure… BLOOP.

Wow, talk about effortless! I had never before noticed such a dramatic difference between two rods. Indeed, using the Plugger turned out to be an absolute pleasure, allowing me to cover the maximum area with every cast effectively and creating crisp, beautiful popper bloops all the way back to the boat.

All I needed now was to hook a big strong predator, and fortunately lure casters rarely have to wait too long in the Solomon Islands for one to cooperate. 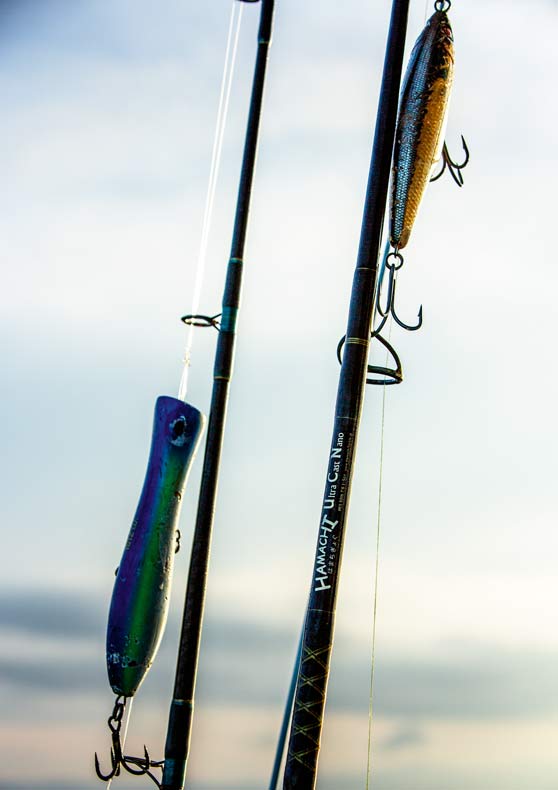 At the time I was describing to the charter operator (who was new to this type of fishing) how I liked to work surface-schooling baitfish with poppers, first placing casts well past either end of the activity, before placing the third cast, so the popper ends up coming back through the midst of the school. It was on the third cast, just before reaching the swirling baitfish, that there was a sudden crash of water, the popper disappeared, and my rod wrenched down.

A firm lift saw the hook-up confirmed, with the line then ripping off the reel in a powerful burst, forcing me to hang on hard while also quickly yelling instructions to the boatman. Fortunately, everything went nicely to plan, and I always felt in control throughout the battle. A nice giant trevally was my reward, the first of several, hefty, hard-brawling beauties. In every case, despite adding extra fingertip pressure to the spool now and then to prevent fish reaching line-shredding coral, the encounters ended positively. 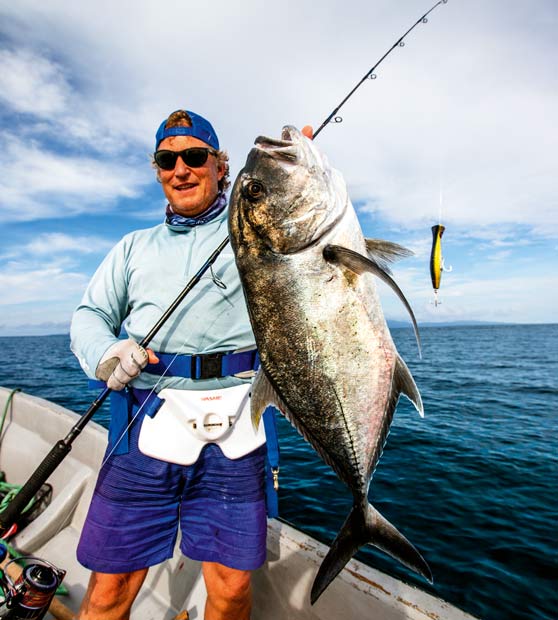 So what makes this rod work so well? Let’s start with the blank itself, as everything else is secondary in importance.

The blurb says the Plugger incorporates “Spiral X and Hi-Power X blank construction technology for reinforced blank strength, torsional rigidity and to eliminate blank twist”. In practical terms, this translates into a relatively lightweight rod that is a delight to use, loading up superbly and absorbing all the punishment I, and the fish, could dish out.

Then there is the butt length through to the reel, which is perfect for realising the rod’s full casting potential (for me, anyway; my arms are relatively short). I could also leverage plenty of power with the rod’s butt-knob against my upper thigh to put decent pressure on a hooked fish, both while attempting to stop them reaching structure and when trying to lift them upwards.

The impressive casting distances I realised were helped by the rod’s Fuji ‘Tangle Free’ SIC K guides – they must have performed as advertised because I enjoyed two days of hassle-free, no-tangle fishing.

I like the reel seat too, even though it doesn’t look like anything special. Out on the water, I found the moulded locking screws were shaped and contoured just enough to help provide grip for my hands without being uncomfortable. My thumb rested on a smooth metal section past the reel seat, which works better than you’d think.

The advertising blurb said this rod would also work well with stick-baits, and to a degree that was true, especially with sinking and sub-surface stick-baits designed to be worked hard and fast.

But it’s almost impossible for one rod to fish all the various lure styles well and surface stick-baits which require a slower, long-sweep action, tended to burst clear out of broken water and sometimes tumbled, despite the rod being kept as low as possible.

A softer tip would have helped here, but that would have affected the rod’s popper fishing capabilities, so the Plugger is a pretty good compromise.

Since my purchase, I’ve come across other anglers who own the Plugger’s bigger, stronger brother, the 8’3” Shimano Ocea Plugger Full Throttle S83H with PE8 capabilities, and all are very happy customers, just like me. 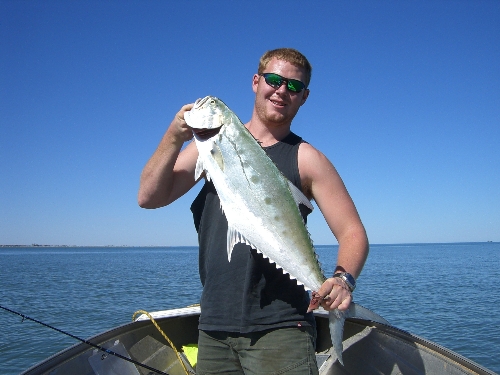