Designed especially for the American freshwater market where distance control and accuracy are essential elements of fishing success, especially when it comes to bass, the Curado DC incorporates a micro-computer which assesses spool speed and applies just the amount of braking need to prevent one of those dreaded ‘Bob Marleys’.

The microcomputer is powered by a small electrical current created via a coil – no batteries or charging required – and it monitors spool speed every 1-1000th of a second. It senses any hint of an overrun and the brake is instantly applied to slow the spool down, preventing backlashes that can ruin your fishing day.

Anglers can dial up one of four settings. One is for distance and will be used by the more experienced anglers using the finest lines; a second when fishing braid and mono; the third for stiffer fluorocarbon; and the fourth for heavy wind conditions and for less experienced anglers. 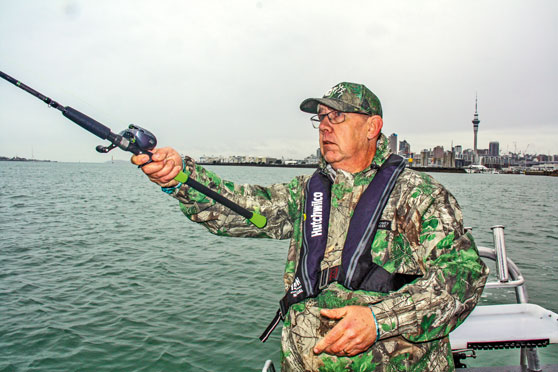 Shimano NZ recently ran several testing sessions for Hunting and Fishing store staff and they all had the same comments to make. They said the reel – the 2018 AFTA Best in Show (Reel) winner – had the ‘wow’ factor, had made casting ‘idiot proof’ and that enabled them to get distance they never had before, especially when casting lighter lures into the wind, which is always fraught with over-run danger with conventional baitcasting tackle.

The test reels, spooled with 20lb Kairiki braid, were set up on Shimano KAOS 7-foot, 11-inch and 7-foot, 2-inch rods and we were ripping out 60 to 100g lures effortlessly, with a lob style casting action working the best. It was a good test day with the wind gusting at over 25knots.

Taking on the conditions from every which way was not a problem. Cast into the wind, having dialled up the appropriate setting, and as soon as the lure touched down the spool automatically stopped revolving. Casting downwind, with the freest setting, saw some great distances achieved.

Relating it to bike riding, the sudden stop was ‘over the handlebars’ stuff the braking was so good and quick.

While I have yet to use the Shimano Curado DC in a true fishing situation, I can immediately see some obvious uses, including soft-baiting in the shallows where long, accurate casting is required, controlling micro-jigs on the drop, casting and controlling an unweighted bait down the berley trail and trout and salmon fishing.

As mentioned the reel was designed specifically for the American freshwater market, but it has been tested extensively in a saltwater environment and stood up well to that, thanks to features like ARB sealed bearings.

To say that the reels will prevent a bird’s nest in absolutely every situation is a little misleading. I did see one shocking cast that, due to poor line release timing, resulted in a minor over-run, so it is possible to get it wrong. Thumbs, therefore, are not completely redundant – you still have to get the release bit right! But if I had to put a number on it, I would say the Digital Control Braking System would make good casters out of all of us 99 percent of the time. The reel ticks the boxes in other ways. It has a solid feel thanks to Hagane technology, where the high rigidity alloy frame eliminates the effects of torque by providing a rock-solid housing and support for the internal moving parts. It is a smooth reel to use, due in part to the micro-module gearing which features more teeth.