Editor Grant Dixon was in Miami earlier in the year for the release of the V6 175-200- 225hp FourStrokes and was impressed with what he saw, where the first of nine next-generation outboards were introduced…

At Miami the many keyboardhardened worldwide boating and fishing press could not find enough superlatives to describe the new V6 platform that introduced some great new technology to the on-water world.

At that release, Mercury Marine’s president John Pfiefer said that the release was ‘just the beginning’ – his version of the ‘wait, there’s more’ – without hinting at what would be revealed to the boating public in mid-May.

So it was off to the Mercury Australasian-Pacific dealer conference in mid-April where the covers were removed on the second phase – the V8 FourStroke which will come in 350 and 300HP options along with a 300HP Sea Pro and Pro XS CMS professional and sports versions.

Miami introduced us to Mercury’s Adaptive Speed Control (ASC), an industry first that sees RPM maintained, regardless of changes to load or conditions such as rough water and tight turns. It produces a sportier feel and increased throttle response.

It’s Advanced Range Optimisation (ARO) which seamlessly and unobtrusively adjusts fuel delivery and has the effect of improving economy in a way that goes un-noticed at the helm. It is a patented technology which uses a wide-range oxygen sensor to monitor the air-fuel ratio over a much greater range than previously possible.

Mercury has added a colour range where polycarbonate accent panels can be changed out to match the colour of the hull. Unlike Henry Ford’s Model T trucks, Mercury outboards are now available in colours other than black! There is even a prepped plain panel which the owner can paint to suit his craft. 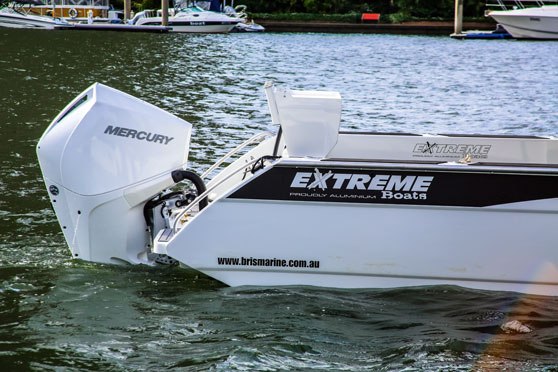 The motors, while claiming to be more fuel efficient than their competitors, are also lighter with narrower (66cm mounting centres), ideal for multiple fit-ups and repowers.

Today’s boaties and anglers rely heavily on technology, not to mention pumps for tuna tubes, washdown hoses and livebait tanks. To handle the battery drain, Mercury upped the capacity of their alternators. The engine automatically increases the idle rpm when it detects low voltage. The motors feature a classleading 20 amps at idle and 85 amps at wide-open throttle.

Work has been done to make the engines even quieter with less vibration. Another innovation is the trap door set into the top of the cowling, making routine maintenance such as oil checks and top-ups much simpler. The cowling release is accessed through the door, making the look of the motor and the cowling more seamless with the external latches removed.

So with the 3.4 litre V6 platform released, it was anyone’s guess as to what would be released at the Gold Coast conference and most were suggesting it would be more horsepower in a lighter, leaner configuration – and they were right.

When I first clapped eyes on the V6 release, my initial impressions were, without going on the water- ‘edgy, mean and lean’. Nothing has changed with the unveiling of the V8 4.6l platform.

The new motors are the result of a consistent research and development programme. It was explained to us that when the 2008 Global Financial Crisis struck, parent company Brunswick cut back on many things, but its R&D programme was least affected. The results of this philosophy are the new V6 and V8 four strokes which have been redesigned and engineered from the skeg up.

So what of the new V8 fourstrokes?

Quite simply, they have set a benchmark in the industry that others can only aspire to.

They offer ‘sit you in your seat’ acceleration and performance through the whole rev range. Like the V6’s they are lighter and more efficient when compared with the competition.

Mercury say in sea trials the 250hp V8 Pro XS is bettering its leading competitor in both acceleration and top end speed while delivering 16% better economy at cruise rpm. 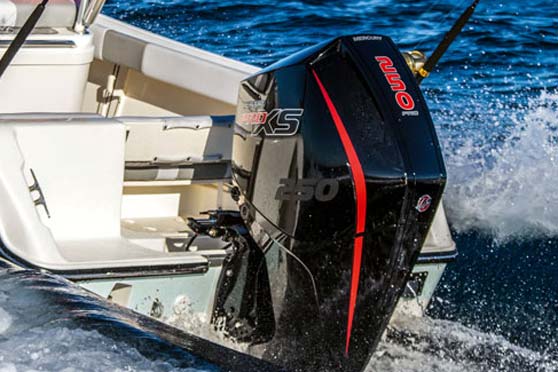 While dealing with the numbers, Mercury claim the 300hp FourStroke delivers nine percent more torque than the nearest competitor in the 3500- 4500rpm range.

The Pro XS range – 200/225/250 and 300hp models – are for those who want an even racier look and performance, not to mention sound. The Pro XS models feature a performance tuned exhaust that, in Mercury’s words, has been ‘engineered to deliver a brawny sound that will turn heads’ – I just think it sounds grunty!

On the Gold coast the various new outboards were put to the test with runs on the Broadwater.

All the good aspects covered in the April 2018 edition’s review of the 3.4-litre based motors were evident in their big brother.

It takes a bit to get me excited about outboard technology. Like most readers, I just want to step on board, turn the key and expect something good to happen at the transom. The new Mercurys are genuinely something to get fizzed-up about. The biggest thing I have noted – beyond the quiet, vibration reduced running, new-look design, improved economy and latest technology – is the impressive mid-range performance.

This is the area where other four strokes might be described as sluggish and it is where the Mercurys now excel.

You may have seen the new Mercurys at the Hutchwilco NZ Boat Show, but don’t take my word for it. Whether you are in the market for a new rig or a re-power, contact the nearest dealer and organise a sea trial. 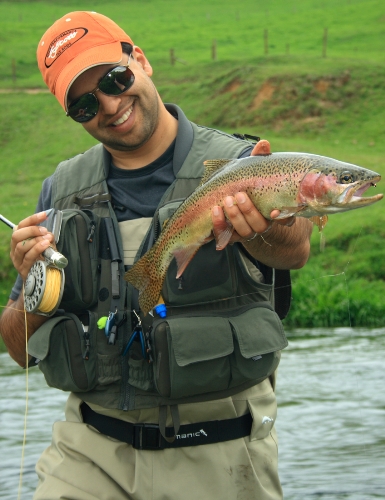