There can be nothing more frustrating for an angler than having a ‘lumpy’ reel drag.

I have had supposedly ‘quality’ brand reels that have under-performed in the drag department right out of the box. It is annoying, and in a worst-case scenario, can result in busting fish off.

When the new model Shimano Twin Power spin reels came onto the market last year, I purchased a 3000 and a 4000 model for soft-baiting. They have proven to be great reels and have done a fair bit of work, especially the 4000, which has dealt to many solid kingfish to 105cm which were ‘accidentally’ hooked when targeting snapper.

After being abused for months on end, the drag in the 4000 was starting to get a little lumpy. Coincidentally, I had been talking with reel technician James Gibbons, who mentioned a new type of drag washers that he is importing for Shimano spin reels.

His claim was that the washers would get better, not worse, the more decent scraps they were part of, and would have probably four times the life of standard drags. James offered to put a set in the 4000 for me, and I quickly agreed, keen to try out the new technology.

The first time I used the reel, I was impressed with three of the drag’s attributes – it was quiet, had low start-up inertia and was particularly smooth.

It’s first big test was on a kingfish that snaffled a soft-bait intended for a snapper. A good 15-minute battle ensued with a 94cm kingfish finally brought to the net, measured, photographed and released. A fish like this on relatively light gear is a solid test for any drag system and these new washers passed with flying colours.

During the fight one of the crew remarked, “it’s not pulling much string”; so quiet was the drag, he couldn’t hear it when the fish made a dash for freedom, which it did several times early in the fight.

It didn’t take much effort to overcome the spool’s start-up inertia. Normally, the rod will take a decent dip before the drag becomes involved and line is lost. I like to fish the heaviest drag that my line and knots can handle, meaning it takes a decent tug from a fish to overcome the initial drag, and for the line to leave the spool – not so much with the new washers. Less start-up inertia reduces the likelihood of a bust-off.

Finally, the drag is as smooth as silk, which lead to the introduction of the product’s name – Reel Silk. The washers are manufactured in the UK from an Italian-made nano-carbon material. This has a smooth, flat surface which creates a dust when exposed to friction, allowing the washers to glide effortlessly against one another. The more you use your reel, the more the drag washers settle in, and the better they get.

James is bringing in three sizes of drag ideal for the smaller Shimano spin reels. The range covers off 50 Shimano options, and he is looking to bring in drags suitable for some of the larger models such as the Saragosa to meet demand.

The other good news about the drags for the spin reels is that they don’t have to be sent to a reel technician to be installed – the owner can make the changes themselves in ten minutes, with basic tools.

For more information, go to www.reelsilk.co.nz or check them out on Facebook (Reel Silk) and Instagram @reelsilk. 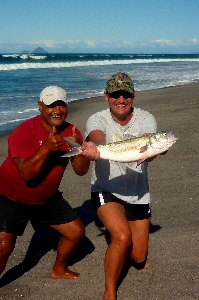