With Black Magic turning 25 this year, it seems appropriate they’re going back to their roots by introducing a new ‘super’ hook, manufactured in Japan. The new hooks are called DX Point and have some excellent features.

Firstly, they are made from high-carbon steel. In terms of strength, high-carbon steel is an excellent material for making hooks, but it can be susceptible to rust. Black Magic’s answer is to coat these hooks in PTFE ? the non-stick surface used on a wide range of cookware from fry pans to utensils. This not only protects the hook from corrosion, but it also reduces friction, greatly improving penetration. These hooks even feel slippery to the touch.

Another great feature is the ‘X’ shaped point. This provides four micro cutting edges which, when added to the PTFE coating and micro-barb, allows these hooks penetrate with ease.

Another aspect to look at when choosing hooks is eye closure. Some poorly-made hooks do not have the eyes closed properly allowing lighter leaders to slip out, or to drop into a gap where sharp edges can damage the line. The DX Point hooks have excellent closures that prevent any of these problems.

During a recent day out in the Hauraki Gulf, we found work-up action with kahawai and other fish chasing schools of large pilchards – but so were a couple of commercial pilchard seine boats. I suspect that seining activity splits the baitfish into smaller, more quickly-demolished schools, meaning short-lived work-ups largely driven by fast-moving kahawai and dolphins, but with the slower snapper not having time to gather in numbers before the bait is all gone. In this case, the sounder supported the theory – scattered snapper sign was visible on the bottom over a wide area, but we saw no big congregations.

However, along with our boxes of lures, we were also equipped to use an old-school approach to extract a catch from this situation. We put the anchor down in 40m and suspended a berley bomb about 10 metres above the bottom. When the tide started to run well, the berley did a fine job of concentrating the fish down-current of the boat.

The four of us, FN editor Grant Dixon, Tim Clark from Black Magic Tackle, Peter Brown from Mercury Outboards and me, tooled up to fish baits on two-hooked ledger rigs and straylines with double-snooded hooks. The baits of choice were pilchards – that is what all the fish in the area were mostly feeding on, after all. 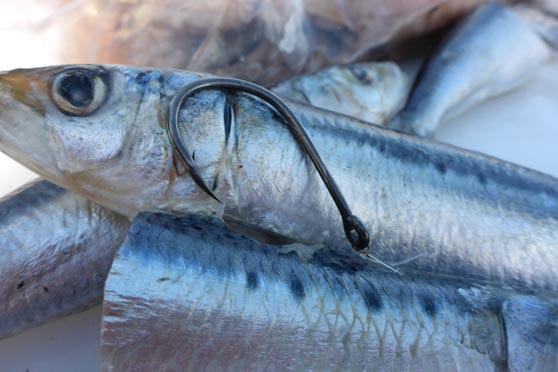 We were all using Black Magic DX Point hooks in 4/0 and 5/0 sizes. Some of the individual hooks I was using were on their fourth trip, with days at the Mercury Islands, Noises and Kaipara Harbor already behind them. I had deliberately not washed the used hooks but they showed no signs of corrosion and the tips remained razor-sharp – a testament to the protection offered by the PTFE coating.

I have mostly used in-line circle hooks for bait fishing for a long time now, and one aspect of going back to a style of hook (offset beak) that I had not used for some years, was the concern that I might get an increase in deep hookups, which correlates with an increase in the mortality of unwanted, released fish. As it turned out, I need not have worried.

Some of us were letting the fish have plenty of time to play with the baits, then simply winding down into them. Other anglers were striking a bit faster to set the hooks. It didn’t seem to matter; the hooks were easy to set and of the 50-60 fish caught (a mix of snapper, big kahawai and gurnard), nearly every fish was mouth-hooked. In fact, there was only one deep hook-set – a decent snapper that had taken the bait while the rod was in the holder, the angler otherwise occupied. This very high jaw-hook rate (at least when fished with rod in hand) was a real boon, allowing us to easily release the smaller snapper, gurnard, and unwanted kahawai, in good shape.

After a decent session, there was no damage noticeable on the hooks; the finishes were unmarked and no bends to tip or shank could be seen, despite some use of pliers to help when unhooking active kahawai. In fact, we would not have had to change a single hook if it hadn’t had to replace a couple lost to ‘couta.

So, big ups for Black Magics DX point hooks. Strong, robust, sharp straight out of the box (and maintaining their sharp points over plenty of use), highly rust-resistant thanks to their PTFE coating, with good eye closures, and the innovative DX points providing excellent penetration – these hooks are winners.

These techy features come at a price, and these hooks are more expensive than many other beak-style hooks. But I reckon that many more fish hooks are discarded without ever being used because they have got rusty sitting in a tackle box, than are used for fishing. With their high-tech finish giving a long life and helping to avoid wastage, DX point hooks are cost-effective and will also give you plenty of confidence when you have a big fish on the end of your line.