It was one of those days. We’d woken up early-ish, taken way too much time at the Warkworth BP getting petrol, ice and coffee, and reached Omaha ramp just as the sun was peaking its head up over the horizon. By the time we got to Ti Point to catch our livies, the bite time had passed and without any bait or berley on board to attract the jacks, we headed to Little Barrier with nothing but jigs and lures.

We picked up a couple of pannies early with soft-baits then shot out to one of the reef structures to the north of Little Barrier for a jig. While we were still having a great time on the water, the fishing expectations were low. It was now mid-morning on a hot summer’s day and Hauraki kingfish are renowned for their aversion to jigs.

My expectations were met. We spent 30 minutes drifting through patchy sign and working hard with jigs for not even a touch, and now the mood on the boat was finally changing a bit. At this point I’d only picked up my rod a couple of times, so the next time the sounder showed a bait ball coming through, I left my helm duties to someone else and dropped my pink and white JigStar Torpedo jig. On my second drop I hooked up. The kingfish was just under the legal limit, but it was enough to get all the boys excited again.

With that kingfish released, we restarted the drift so we could hit that same piece of sign. The result was the same. All four of us were jigging our hearts out, but again, my jig was the only one taken – and this kingie was more than big enough for the bin. It was at this point that the guys started asking what jig I was using.

While that was the last king for the morning, I experienced something similar two days later. This time round I was more prepared and we arrived at Anchorite (Hauraki Gulf) at first light with five livies in the tank. The first three livies were taken in the first twenty or so minutes but only one fish was landed. Despite the hot bite, the one crew member who had been persisting with his jig hadn’t been touched by a kingfish. So, on the next drift I put my theory to the test, pulling out my JigStar pink and white jig and throwing it over the side. You guessed it: I hooked up within a few winds. This one I lost two thirds through the fight, but I didn’t mind – I’d found my new ‘go to’ jig. 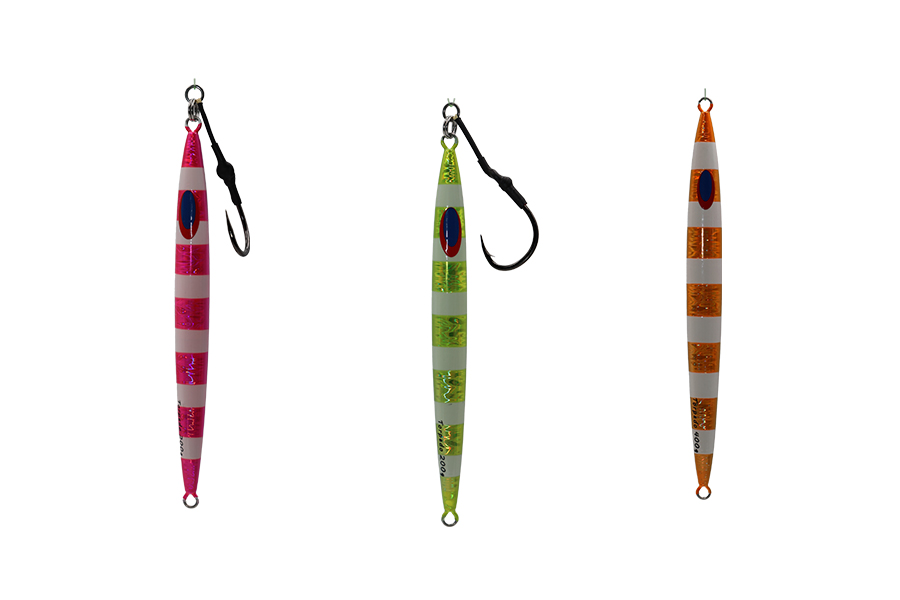 The new JigStar torpedo jigs are available in four weights and five colours, all featuring a holographic/luminous finish.

Now back in the office, I’ve taken some time to give this range of jigs a closer look. Why do the Hauraki kingfish like them so much?

The most obvious answer is their shape – they are not your standard speed jigs. The tail-end of the jig is slim, but the body grows progressively thicker until it peaks just below the top attachment point. This means the weight isn’t evenly distributed. It’s also worth noting that the bottom of the jig is completely flat – all of the weight is in the top half of the body. The result: a jig with a dynamic action.

Standard speed jigs go down and up the water column fast with minimal resistance – that’s what their designed to do. The JigStar Torpedo range, however, will flutter side to side as they are retrieved. The first advantage of this is that they can also be worked slower – in fact, if you head to Marine Deals, you’ll see they’ve been labelled as ‘slow pitch’ jigs. With their inbuilt action, you don’t need to do all the hard work yourself. The second advantage is that they will create more commotion in the water and better imitate a dying baitfish.

When kingfish are hot on the bite, then standard speed jigs are ideal – they get to the bottom quickly and the kingfish love their rapid movement. However, when the kingfish are shy or are a bit wary of jigs (both typical in the Hauraki), lures with a more erratic action that can be worked slower may still entice a bite. My experience provides some compelling evidence for this.

The other properties of the jig I noticed were the holographic finish and luminous underside. JigStar claims the holographic finish mimics the flash of startled prey and the luminous reverse strobes as the jig drops, attracting the attention of any predators in the area. I haven’t yet tried the other colours in their range personally, but they all have the same holographic/luminous finish, so I can’t see why they’d be any less effective.

Keen to give these jigs a test outside of the Hauraki before this article went to print, I let my mate – who also happened to be a stag for the weekend – give my new trusty jig a shot at the Alderman pins. The story repeated itself. He hooked up to a rat king first but it broke him off at the boat (I said, “Don’t worry about it” through gritted teeth), so I tied on another jig in the same range – the 400g blue and white model. He got his keeper a few drops later, and his were the only two kingies hooked that morning.

All in all, I can’t give the final word until I try the full range in a few more locations, but I can assure you that, for the time being, these jigs have been moved to the top of my tackle bag. 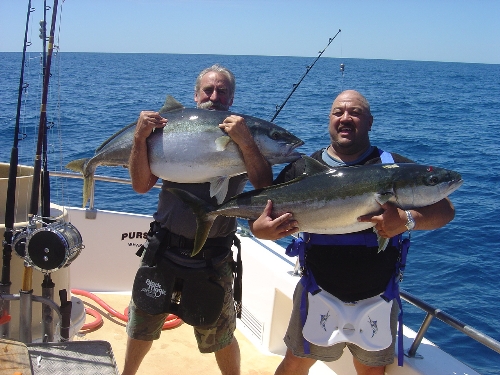