I called into the North Shore Hunting and Fishing store recently and was talking to one of the owners, Pete Francis, discussing our holiday fishing as well as the plethora of new tackle now available, especially in the lure department.

Pete showed me a couple of slider style lures he had used up north, on which he had caught some nice snapper.

Picking one off the wall he casually tossed it at me. The packet said ‘90 grams’, but the head was half the size of a conventional 90-gram lure!

‘Give this a try’ he insisted, picking out another packet where the lure weight was indicated as 60 gram.

Heading to Bream Bay and with big tides, an unhelpful moon phase and the Maori fishing calendar saying ‘stay in bed’, Miah and I gave them a swim.

We were fishing the dawn bite time, such that it was, in 50 metres of water, drifting alongside some foul ground where the sounder indicated a smattering of sign on the bottom.

The first thing you notice is how quickly the lure sinks to the bottom, allowing it to be fished vertically in the strike zone for a longer time than normal.

Miah was fishing the gold 90-gram lure and instantly hooked up on a modest snapper – which turned out to be representative of the school beneath us.

Moving away from the broken ground she picked up three gurnard over the sand, the longest being an XOS 46cm model – the best ‘carrot’ I have seen come out of the area for many years. Another smaller snapper followed on the next drift then the bite shut down, and we had two fruitless hours trying a range of terminal tackle to no avail.

We were fishing the lure on a Shimano JDM Engetsu Game BB acid-wrap slow-jig rod and Shimano Tranx 300 reel – ideal for this type of fishing.

The reason for the lures’ smaller size and great sink rate is in the material the head is made from – tungsten. This weighs 1.74 times as much as an equivalently sized lead head and consequently sinks faster.

Due to the cost of tungsten against lead, the lures are quite a bit dearer than conventional product. They come in two colours – yellow/pink and gold, and in three weights – 60, 75 and 90 grams.

The lures are rigged with quality Owner hooks and cost around $34 each, which is not cheap, but given the performance, are worth it. Just make sure your knots and trace are in good shape! 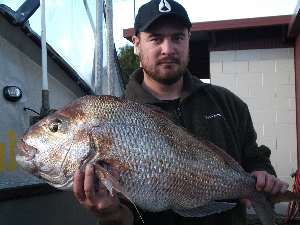