When he returned the 2018 Ranger Wildtrak test vehicle to Napier’s Bay Ford dealership last year, it was firmly placed in Bruce Basher’s mind as the top vehicle he had tested in this series.

At the time it sure was the complete package and I was convinced it would remain in the gold medal position for many a year.

My confidence, however, didn’t remain intact for long. Steve Ward, the dealer principal, rather offhandedly asked if I would like a Ranger Raptor for the 2019 Snapper Bonanza contest. It didn’t take me long to accept that offer!

Three years of hard testing the Raptor in the outback of Australia had produced all sorts of incredible rumours and stats and I was just dying to see if they were all true. Believe me, they are! So much so, in fact, that the very capable Mr Wildtrak now has to be content with the silver medal.

Ford New Zealand and its dealerships subscribe to the catchphrase, “Rethinking what service should be!” I had an example of just what kind of service this means from Steve and his team of Vanessa, Glenn, John and Karl. Their efforts to make my test drive happen warrant this special mention here!

Bay Ford had sold their Raptor demonstrator that I was originally going to use so Ford NZ transported a substitute vehicle all the way up from Dunedin. They even gave it to me a week early to play with! Little wonder the Ranger series are consistently this country’s number one best seller. I took advantage of the early arrival by heading out to Awatoto, just south of Napier, to do a bit of driving on soft shingle. Due to time constraints, this was something I hadn’t been able to do for previous tests. Even with on-road tyre pressures, all I had to do was to tap the mode buttons on the steering wheel to set up the whole vehicle.

This turned the soft deep shingle into the equivalent of nothing more than a metalled road, such was the ease with which the Raptor overcame it. The rev counter was steady at about 2200 rpm even in the deeper stuff!

During the almost 3000kms I drove this vehicle, I really loved the Drive Mode system. You just choose one of the six available modes for the terrain you’re about to drive in and the vehicle sets itself up for it. It’s my nomination for “the best thing since sliced bread” award of the decade!

To say the Raptor performs like any well-bred sedan on the road is a gross understatement! In the whole journey from Napier to Kaitaia and back, even though we were towing a trailer heavily laden with fishing gear, we had no problems whatsoever.

There was no body sway or steering issues no matter how hard I threw it at a corner. Braking was also as precise as it should be even though it’s bigger and taller than its competitors. It just shows how much thought and safety gear Ford has put into the Raptor.

The multi adjustable seats were a real standout in both comfort and support. In fact, the whole interior and dash layout made for a vastly superior drive even though I have spinal issues in need of some rather drastic corrective (and overdue) surgery. 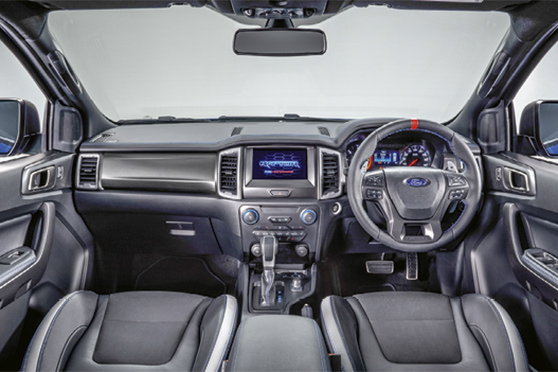 Interior of the raptor.

The new two litre Bi-Turbo power plant is also really something special. So much so, that some people have trouble getting their heads around it. They have a problem believing that, at only two litres, it has 10 kW more power than its predecessor, the much- admired five cylinder 3.2L unit. And it has a whopping 500Nm of torque! That’s 30 more than the 3.2L engine! 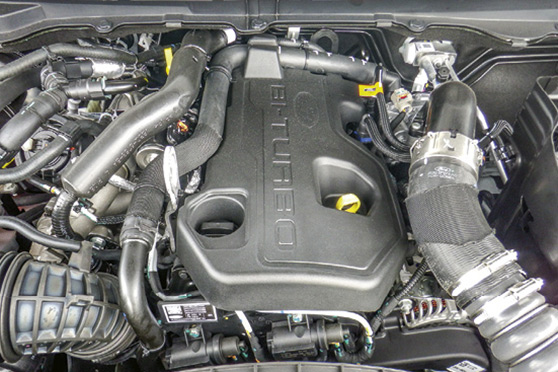 Coupled with the motor is a very robust and smooth 10 speed automatic transmission. This transmission is also fitted to the Ford Mustang so its ability to “take the grunt” is beyond argument. With all these gears to play around with, the power plant is kept within its best power and economy range in almost every situation.

With this vehicle now being a popular choice for recreational fishers, hunters, off roaders and anyone else that likes to drive the rough stuff, I checked out its ability to handle soft, deep-sand situations.

The ideal opportunity presented itself mid-week at the Te Paki Stream, which can be accessed from SH 1 to Ninety Mile Beach. Dry weather conditions had left the middle section of this access way a deep sand dustbowl and I could see that some other vehicles had needed assistance to get out of it. There was a safe route around it, however, for those put off by what they saw.

We came up to this section behind an opposition make of 4x4 that we were supposed to test instead of the Wildtrak in 2018. I bailed out of testing this vehicle because the national dealer principal had not wanted me to do any off road testing – I can now see why.

This vehicle entered the sand section and was very quickly in trouble! It bellowed and wallowed about like a demented water buffalo on meth and made very awkward progress! A few taps on that marvellous drive mode selector had the Raptor ready to go, and go it did!

We easily went by the water buffalo at about the half way mark where he bailed out and went for the safe route. Just to add insult to injury, I deliberately drove the Raptor through one of the spots where someone had got stuck. With the power plant ticking over at just on 2300rpm, we drove straight through. No danger! 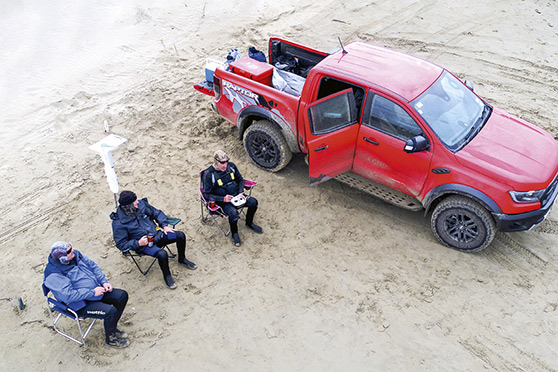 Another spec I was keen to check was fuel consumption. Ford specs say the Bi-Turbo unit is rated at 8.2 litres per 100kms. With approximately 1600kms towing a laden trailer and much of the rest of our travelling off road, I got an impressive 10.6 litres per 100km. Incredible, to say the least.

The Raptor boasts a safety spec sheet a mile long. Well, almost. Those wanting to read up on these specs need to check them out with Mr Google as there’s far too much for me to include here.

There was nothing I disliked about testing the Raptor apart from when I returned it to Hawkes Bay Ford in Napier. A sad day indeed! 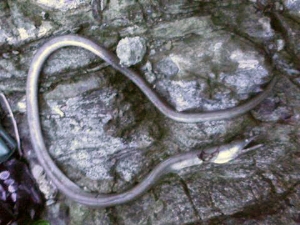