A road trip towing a seven-metre plus trailerboat from Auckland to Whitianga via the Kopu Hill is a good test for any vehicle. Grant Blair puts the Ford Everest Sport through its paces on a boys’ weekend away…

This tow test was no five-minute jaunt down the motorway and back for a couple of happy snaps. The plan was to tow the NZ Fishing Media Extreme 745 Centre Console On-Line II from Auckland to Whitianga and back with the latest and very impressive Ford Everest Sport. The road from Auckland to Whitianga via the Kopu Hill on State Highway 25 is twisted, uneven and quite steep in parts – an ideal workout to seriously evaluate any tow wagon!

The Everest Sport brings a unique, sporting look and additional features to the highly-capable, seven-seat 4WD Everest, including 20” alloys and beefed up headlights. It boasts the 2.0L bi-turbo engine and 10-speed gearbox found in the Ford Ranger Wildtrak, FX4 and Raptor models – a configuration I was already familiar with. When you tell someone you’re towing almost three tonnes with a 2.0L engine, they’ll probably give you the blank ‘that’s not going to work’ look but the bi-turbo engine actually produces more power than the 3.2L turbo diesel! There’s grunt when you need it and, thanks to a 10-speed box, the gearing is always optimised. For the record, the Everest has a tow rating of 750kg unbraked and 3100kg braked.

I was joined on this trip by Ford NZ’s Tom Clancy and the time flew – we had the state of the nation sorted by the time we arrived in Whitianga. One thing I’d had on my checklist was seeing how the suspension managed such a heavy load but that was answered – it gets a definite thumbs up. The Everest has a slightly softer suspension than the Ranger, but even the numerous nasty dips where the road has sunk quite substantially were taken in its stride, and we powered up the Kopu and Tairua hills effortlessly. We weren’t pushed around by the 745 Extreme, but rather, the Everest handled corners and bumps effortlessly and comfortably. Braking was not noticeably different to normal driving – we use the Credo braking system on the Extreme which is basically a clever little box of ‘elec-trickery’ that connects the braking system to the trailer via Bluetooth.

Another plus was the fuel economy – the total trip, including some local running about in Whitianga, was completed at a miserly 15.9L/100km, which is quite impressive given the terrain and load. There’s plenty of room in the boot and we managed to stack up a decent pile of gear, most of it mine – when it comes to a day on the water, it always pays to have plenty of options! The automatic boot opening is handy when you have an armful of bags and rods too. 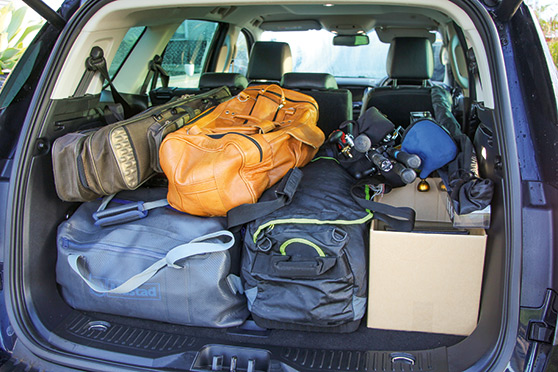 The Everest has more than enough boot space for a weekend adventure and can be reconfigured as a seven-seater when the storage is not needed.

Ford is at the forefront of rapidly advancing motor vehicle technology and a feature I really liked was the Everest’s Terrain Management System. Essentially, at the turn of a dial, the car is optimised for any surface, on or off road. This means that traction, stability and control are maximised whether you’re on snow, mud, grass, sand, rock or road – very clever. Other technology features include AEB with pedestrian detection, lane keeping assistance combined with an alert, traffic sign recognition and adaptive cruise control. There’s also a five-star ANCAP safety rating and the whole package is backed by Ford’s five-year/unlimited kilometre warranty. It’s basically got all the latest in toots and whistles and then some. 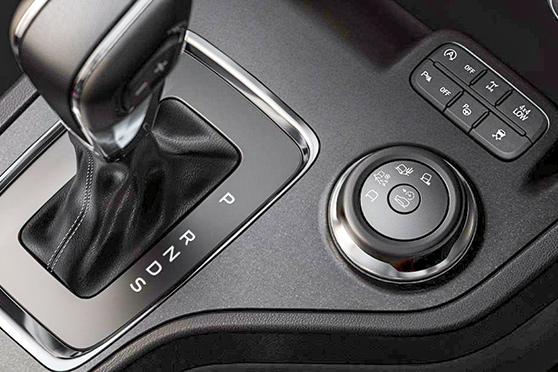 Ford's Terrain Management System - at the turn of a dial, the car is optimised for any surface, on or off road.

My wise and thoughtful mother once said that success is the result of careful planning, so having taken that sage advice onboard many moons ago, we’d scheduled in a day of fishing – any tow test wouldn’t have been complete without a few hours on the water!

We had a great day exploring Mercury Bay and all the interesting spots out to the southern end of Red Mercury Island. Tom boated a feisty kingfish which took a livebait from a school of pilchards in the middle of Mercury Bay as the sun rose. Working our way out towards Red Mercury, we then managed to put a few plump snapper into the salt ice slurry for a future dinner date, along with a couple of john dory. Soft-baits, particularly in the New Penny colours, and pink kabura-style lures were the go, and while the fishing certainly wasn’t hot, there were a few nice fish in amongst the kelp and on the deeper foul. Balex’s Dan Given caught the fish of the day, a solid 65cm snapper.

I’m pleased to report that in all aspects, the adventure was a resounding success. The Ford Everest Sport performed exceptionally well, and conditions on the water were perfect. The Everest is a stylish SUV that will look sharp in any valet parking lot but can also tough it out when it comes to towing and tricky terrain. Whether it’s taking a load of kids to Saturday sports using all seven seats or towing the boat with your mates on your latest fishing adventure, the Everest Sport ticks all the boxes.

For the technical specifications and more information on the Ford Everest range, go to https://www.ford.co.nz/suv/everest/