While on many occasions the rod tube is part of my travel luggage, often I don’t have that luxury and that is where the Daiwa combo kicks in.

The bulk of trips where I am taking my own tackle are to the Pacific where, other than the big game players, the likes of GTs, dogtooth tuna, red bass and coral trout are on the inshore hit list.

Firstly, you need good gear to take on GTs and dogtooth, especially in tough, coral bommie-strewn territory. With its 15kg of drag, the Saltist LTD 6500 will stop all but the biggest fish.

Having a four-piece casting rod such as the Demon Blood that packs down into a standard suitcase is a great compromise for the travelling angler.

I took the combo away with me on a recent trip to Tonga but unfortunately the weather precluded any serious casting missions. Back in New Zealand it has seen some topwater action but a couple of small kingfish in the 70-80cm range hardly tested the combo’s true capabilities.

For many years a Daiwa 6500 Expedition has been my ‘heavy-duty’ spin reel when travelling, loaded with 80lb braid. It has accounted for GTs over 40kg, similar sized dogtooth and its best yellowfin was a 50kg-plus effort.

The Expedition is a forerunner of the Saltist LTD 6500 and a reel that over the years has stood the test of time, requiring nothing more than a regular service and the odd bearing and drag component replacement. The gear has some great features. Starting with the reel, I like the fact that the internals are protected by ‘Magseal’ – a lubrication system that uses magnetised oil which, working in conjunction with magnets between the reel’s body and rotor, greatly reduces the possibility of water ingress into the reel’s body via the main shaft.

The Saltist has ATD, Daiwa’s new drag, that better supports the spool across the entire length of the main shaft. This additional support reduces spool twist under load, promotes more even wear of the drag washers and ultimately reduces ‘pulsing’ of the drag when fighting big fish. Drag start up inertia is reduced, resulting a smooth drag from hook-up.

Other features include an airbail for hassle-free engagement and ‘air rotation’. This last feature enhances rotational balance and reduces vibration, for even smoother reel operation.

At the heart of the Demon Blood’s blank design is HVF – High Volume Fibre. This combines precise resin control with unidirectional graphite fibre to produce a blank with maximum graphite density.

A strong lower section is enhanced by ‘3EDX’, where the knitting of densely packed carbon fibres in three directions creates a six-wrap rectangular weave, distributing the power evenly and allowing the blank to maintain its form when loaded.

This new support system allows the rod’s power to be concentrated at the lower section of the rod, for more power and less angler fatigue. This leaves the upper section of the blank to absorb all the weight during a battle with a large fish rather than the angler.

The reel seat is heavy-duty Fuji with locking rings while the guides are Fuji Alconite Ks. Tough EVA grips complete the componentry.

Summing up, this combination, while great as a travel companion, will be just as at home targeting kingfish with topwater lures – and it won’t break the bank. 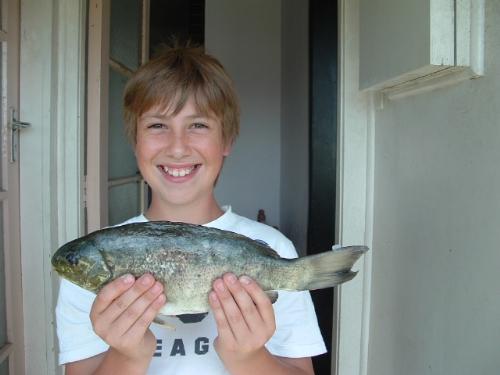