I continue to be amazed with what is developed by our New Zealand lure makers, and the Catch Double Trouble jigs are yet another example of this.

We are blessed with the world’s best snapper and kingfish populations. Snapper are an iconic Kiwi species, caught throughout the North Island and the top of the South, and this is reflected in the effort our lure designers put into developing product to target them.

A great example of this is the Catch Double Trouble jig, and the latest version of which – the Rainbow Warrior – was recently released on the New Zealand market.

The moniker Double Trouble alludes to the fact that the lure, depending on which end the trace is tied, can either be a knife or a slow-pitch jig. This is due to where the weight is placed in the body of the lure. Tied with the weight aft, it acts as a convention knife or mechanical jig with a quick, direct fall. Attached at the ‘eye’ end, the descent takes on a fluttering, darting course to the bottom, which attracts plenty of attention on the way down.

While dropping a 300g Double Trouble in 80 metres of water, Catch Tackle’s John Donald tells me that there is a difference of 15 seconds in the hang time, depending on how it is deployed.

Double Troubles are rigged with an appropriately-sized assist hook on a Kevlar trace. John says some anglers hedge their bets with multiple hooks – perhaps two at the head end and one split-ringed to the tail – but he says this is not necessary and only invited trouble when dealing with a thrashing fish boat side.

To put the lure, and several other Catch products through their paces including their own branded rods and reels, I spent a day with John aboard his Pier 21, Westhaven based charter boat Wave Dancer. New Zealand Fishing Media’s Sales Manager Josh Williams and Fish City Albany’s Mike Graham also joined us for the day, not wasting the opportunity to catch a few fish. Our skipper was Jack Lucas who knows the Hauraki Gulf well and he was able to put us amidst the work-up action out past Anchorite.

The birds and dolphins were not actively feeding, but the sporadic action over a wide area was a good test for the Double Troubles. Most lures will catch fish when they are on the chew; the true test is when they’re not.

We worked hard for around 15 snapper plus a couple of carrots (gurnard), none of them monsters, before looking for more intense action as we headed back inshore. Jack found this in about 40 metres out from Tiri Tiri Matangi Island. We were late on the scene, the action slowing down from what had been an intense work-up. Unfortunately, the birds and dolphins pushed the bait into the cable zone – a non-fishing/anchoring area where the cable that connects us to the rest of the world runs up through the western side of the Gulf.

This left us fishing what is known as the ‘exhaust’ – the area where the action had been. This is often every bit as productive as the immediate area of the work-up itself. All the bits and pieces of baitfish that drop un-noticed to the sea floor create a huge berley trail, and the snapper are often found in good numbers hoovering it up.

We were not disappointed. Pilchard scales were still hanging in the water as we dropped the Double Troubles down and almost every time they were hit, regardless of how they were rigged. It was a hot bite for around 30 minutes and a great end to a day that proved beyond double the effectiveness of the lure.

The one thing I learned about the Double Trouble is they need to be actively fished. As a slow-pitch jig, it was a case of controlling the descent and being ready for a bite on the drop. When the jig hits the bottom, it is raised with a series of very slow winds – it feels like you are in slow motion – and gentle lifts of the rod for around five metres or so, before dropping and repeating. This is all that is required to entice attraction. Once the line angle gets out beyond 45 degrees, it is time for a full retrieve to repeat. Obviously, the effort is far more intense when the Double Troubles are fished using the mechanical jigging technique.

These are not lures that fish well in the rod holder or with the drop and drag method that can be effective with the likes of the slider-style lures. If this is how you like to fish, there are plenty of lures in the Catch range, such as the Beady Eye Kaburas, that will get the job done.

Catch Double Troubles are available in four holographic colour combos – Ballistic Blue, Orange Assassin, Shady Lady and White Warrior. There is a fifth recently introduced schematic called Rainbow Warrior. It encompasses elements of the four standard colours – “for anglers that can’t make their mind up as to what colour to use,” John suggests. All colours have lumo strips, with the White Warrior having even more glow on its back. There are five weight options – 60, 80, 100, 200 and 300g. 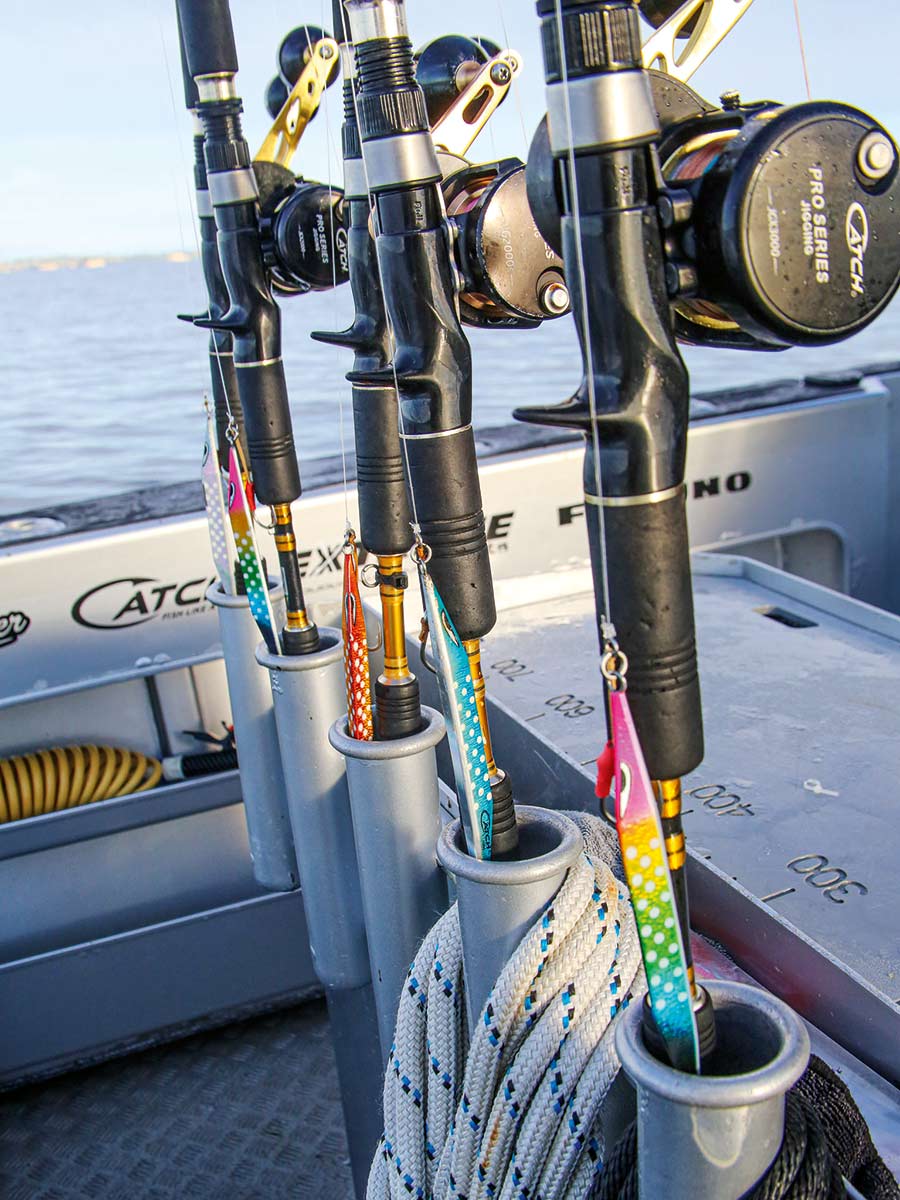 Talking through the lures, John says they were thoroughly trialled in both our waters and overseas when travel was practical.In testing they ‘caught everything’ on them, including hooking but not landing a striped marlin in New Zealand and several sailfish in Malaysia.

One customer has told John he uses the lures to successfully troll for albacore. A technique John is working on is to attach two 100g Double Troubles via a split ring and towing them this way. He says the join seems to create a bubble trail and quite a swinging action, and he’s looking forward to trialling this more in the coming months. 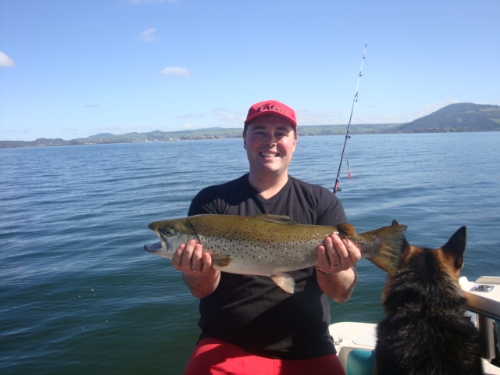