It was about 1pm on day one when I lost count of how many solid snapper we’d caught. The high pitched sound of line tearing off the spool had been something of a backing track for the morning. Most of the fish landed were probably hovering around 50 centimetres long, with a few more jumping up over 60 – so just “Northland pannies”, as I was repeatedly told. With the bite now finally slowing, I took the chance to have some lunch and a breather, but even the rod in the holder wasn’t safe, and before long I was on my feet again, doing my best to bring in another Far North red.

It’d all started a few day’s previous when I got a call from Grant Dixon, my boss and the managing editor of this publication. With a hip operation imminent, he regretfully informed me that he was in no shape to drive to Houhora to fish with John Donald, owner of the NZ tackle company Catch Fishing, onboard Houhora Fishing Charters. This outfit is, of course, run by none other than Rob Parker, who is most famous for his ability to find and catch 30lb snapper. The purpose of the trip, Grant continued, was to test Catch’s brand new Black Label Livies soft-baits, and it was agreed between him and John that there’d be no better place to do this than in the Far North.
“Do you have time next week to take my spot?” he finally asked.
“Ah, it’s been a busy week GD, and I’ve got a bit on, but I’ll see if I can move a couple things around if you really can’t go.”
Grant was extremely grateful for my generosity and agreed that he ‘owed me one’. I, of course, would have happily taken two days of annual leave, paid my own way and written this article free of charge. And so I arrived in Houhora on Monday evening at a farm stay, where I found John rigging up the soft-bait gear. After I’d been given a good rundown of his new range of soft-baits and tied a few FG knots (I’ve never been more careful), we set our alarms and tried our best to get some sleep.

The forecast 10 knot westerlies and overcast skies greeted us at the ramp, as did the jovial Rob Parker, who lived up to his reputation as a “straight talker”. His just under 6m Stabicraft is a smaller than average charter boat, but it’s all he needs to get to the snapper grounds around Houhora. Grant Foster from Addiction Unleashed, another well-known and talented Far North angler, rounded out the crew for the day. Within minutes, we were out of the harbour and pulling up at spot number one. The rods came down from the rockets, and I was handed the Catch SP3000 spin reel paired with the Catch ProSeries two-piece spin rod. The SP3000 is not as high spec’d as it’s American-made counterpart, the Catch IRT 200 spin reel, but it certainly did the job over the next two days, comfortably dealing with its fair share of solid snapper. Rigging up the soft-baits came next. I was presented with a gloriously colourful box filled with seven-inch Catch Black Label Livies, and told to take my pick. Not having used these soft-baits before, I chose at random and pulled out the White Warrior – a slender jerkshad that immediately felt a bit different in my hand than other soft-baits I’d used. Manufactured from super tough TPR (thermoplastic rubber), it was firm, but definitely not stiff. The jig-head I was passed also provided a point of difference. Based off a Japanese style called “tenya”, the Catch Stingaz jig-heads come with an assist hook that can be rigged through the bottom half of the soft-bait so it protrudes point up on the opposite side to the main hook. This was something I’d always liked the sound of, but never actually tried.

And so we cast out our offerings beside a mussel farm, with my anticipation about as high as it’d ever been when soft-baiting. But after 20 or so casts without a fish, we were off up the coast and heading to the next spot Rob had in mind.
Now in slightly deeper water, I cast my White Warrior in front of the boat and this time it didn’t get close to dropping the full 20m before the bites started. Early trip jitters meant I missed the strike, but the same wasn’t true for Grant.  He had quietly pulled in what would have been a comfortably 50cm fish, and then I watched as he, without saying a word, released it back over the side.
“Oh, you didn’t want to keep that for dinner?”
Both Rob and Grant told me not to worry, and Rob actually laughed – and that’s when the chat started.
“That’s not even a pannie in the Far North.” I would’ve objected but the next couple of hours saw plenty of fish well over the 50cm mark come on board. Grant was the first to land one over the 10lb mark, and then I was up next, before Grant and John both pulled in a couple more nice fish. By lunch, we’d caught more 50cm+ snapper than I’d seen on one boat in a single day – the exception being perhaps one or two Hauraki Gulf days in the heat of spring workup season. What happened next, however, very rarely happens in the Hauraki Gulf, if at all.

Grant’s Black Label softie got picked up, and whatever was on the other end was not too bothered by the drag his reel was exerting. It ran, and ran, and ran, and then he got one wind back, and then it kept running. Rob called it for a snapper (he didn’t get one species wrong the whole trip), and we all knew this was the fish that anglers come to Houhora from all around NZ to catch. And then, for seemingly no good reason at all, the fish popped off. I won’t repeat Grant’s language.

We didn’t have time to wallow for long though, as John soon brought in another couple snapper pushing the 75cm/15lb mark. The action just kept coming, and amazingly, our soft-baits stayed in fantastic nick. This was the first observation I made about the new Catch range. As I had guessed as soon I picked up my White Warrior that morning, they are extremely durable, even withstanding the jaws of multiple 10lb plus fish, as well as plenty more smaller ones. The only time I reached back into the box of soft-baits was after I was broken off on a reef. 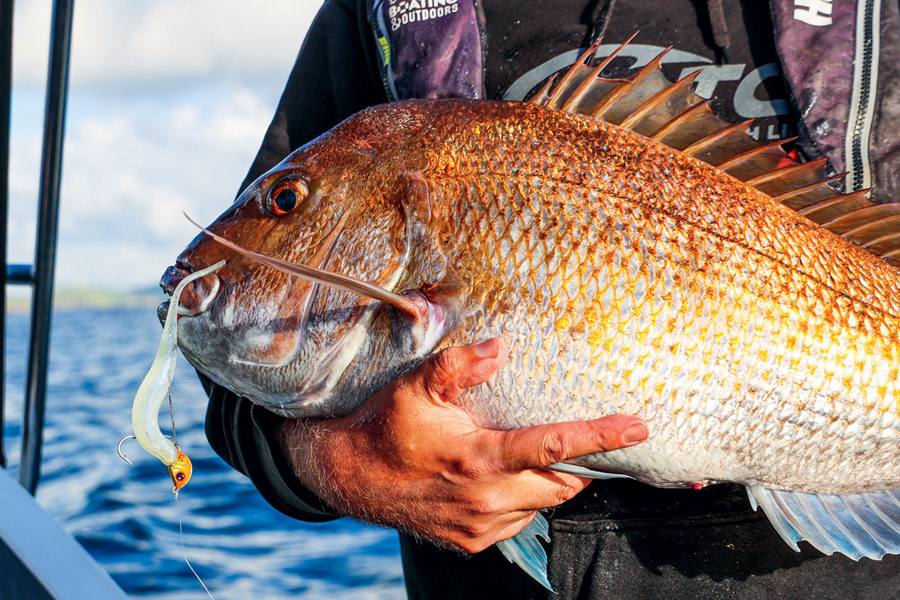 The second observation I made was that about 80% of my fish were caught on the assist hook at the bottom of the soft-bait. Even one of my bigger fish pushing the 10lb mark was nicely hooked in the lip by the smaller hook. By the end of day one, I was thoroughly sold on this idea, and left wondering why the assist hook wasn’t already a well-established part of every jighead. Yes, most big fish smash the head of the lure – but fish aren’t always the most accurate feeders, and neither are they always going to swallow the whole lure. When the bite is tentative or the fish are smaller, as is often the case in my home grounds in the Hauraki, this assist hook could be the difference between an empty bin and a good feed.

I won’t bore you with the play by play of day two. I will admit it was slower, but we still managed multiple fish over 60cm, including an approx. 75cm model for John. The fish of the trip was also landed, but not by John, Grant or me. Nova Walsh had driven up from her home in Cooper’s Beach the night before to join us for the day, and it was no surprise to anyone that she would be the one to take winning honours. Her rod was in the holder when her soft-bait was picked up and her reel started screaming. The angled hook of the Stingaz jigheads, I am told, keeps the lure working in the current even when not being worked – and this trip provided plenty of evidence for this. 10 minutes later, a 21lb/82cm snapper came aboard. It was Nova’s first 20lb snapper, and almost poetically, she was using the Orange Ochre. This colour is heavily indebted to Rob Parker’s ingenuity, and the story is worth sharing.

A long time ago, Rob wanted to make his own soft-baits, so he imported plastisol from USA. After combining it with some food colouring from his kitchen, he created a bright orange soft-bait. On trip after trip, he found the colour to be a winner, so he generously shared some of his original samples with Catch. On their first attempt to manufacture this colour, Catch decided to add a glow in the dark underside. An unintended consequence was the glow pigment lighting the orange topside, and their highly successful “Glowing Gurnard” colour was the result. On attempt two, they matched the colour, added UV into the polymer, and Orange Ochre was born. To be fishing with Rob and John, and then see a 20lb snapper fall victim to an orange soft-bait, was a little surreal. So, what was my overall impression of the Catch’s new Black Label Livies?
Overwhelmingly positive. To only burn through one soft-bait during a hot day’s fishing in Houhora is a bit ridiculous, so they get top marks for durability. Without any scent, they completely rely on their action to attract a bite. Judging by our two day’s fishing, I found no reason to detract any marks from the score card in this section either. When used with Stingaz jigheads, you have a deadly combination which I would recommend to anyone who uses soft-baits.