Black Magic’s new KLT hook is a similar shape to the well-known KL circle hook pattern, but a non-offset point means it meets IGFA regulations, particularly for use in tournaments, as well as promoting jaw hook-ups. The superslick PTFE coating assists penetration and prolongs the life of the hook, ensuring they are highly corrosion resistant. Manufactured in Japan from high-carbon steel, they have excellent strength and are available in sizes 1/0 through 8/0 sizes, in small or economy packs. BMT directors Steve and Denise Newlands spent a day or so testing them on Gulf of Mexico yellowfin earlier in the year, producing some great results on fish to 50kg. Tuna are great adversaries and you work hard for every metre of line retrieved, putting great pressure on terminal tackle, in particular. The KLT hooks came through with flying colours.

I have been using these hooks for several months now for a range of bottom fishing applications, including bottom-bouncing ledger rigs in deeper water and also in stray-line rigs, off the Bay of Islands and Raglan, with good success. The hooks have proven strong; I have caught some decent snapper on them and have not bent a hook. The finish is tough, too. I have put used hooks back in the tackle box without washing them in fresh water, and after three months I can’t tell the difference between them and unused ones by looking at them.

Finally, the KLTs provide a very high percentage of mouth hook-ups, making for easy un-hooking (so the fish is out of the water for less time) with little injury to the fish. All of this goes to a better survival rate of released fish.

On a recent day out with my wife, Faith, we targeted some snapper, drifting over deeper, 55 metre pins off Bream Bay. Faith prefers to fish baits and mono line on conventional overhead tackle while I was using slow-jigs and softies.

The recurve style hooks are great for fishing baits on the drift in deep water – the fish hook themselves and all you have to do is quickly wind to take up the slack and most times there is the perfect hook-set, the point rolling nicely into the corner of the jaw.

Faith was on fire this session and had five fish to over five kilos before I managed to trouble the scorer.

With six fish in the bin, that was all we needed and headed home, satisfied as to the effectiveness of the KLT’s for this style of fishing. I have since used them to deploy jack mackerel livebaits for snapper with good success.

I also like the PTFE coating which makes baiting up easier, especially with tough skinned baits such as fresh kahawai strips. The fact that the hooks are ultrasharp also helps!

Like Sam, the hooks I put back into my tackle box without rinsing them in freshwater showed no signs of corrosion the next time I went to use them. 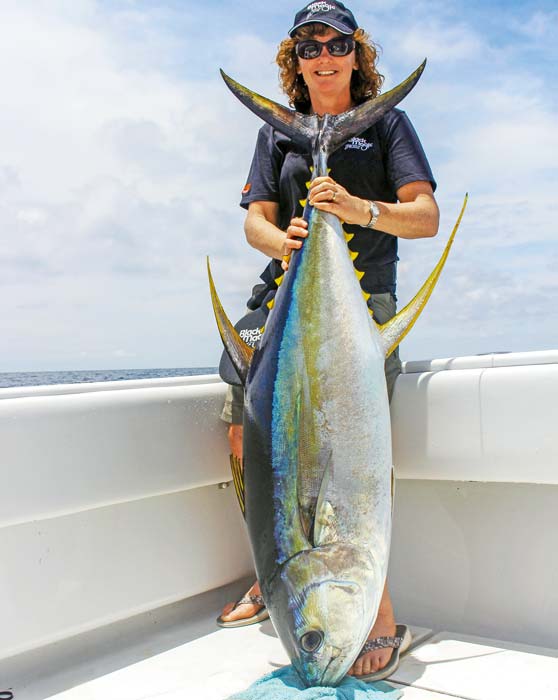 Black Magic’s innovation in pre-tied rigs (such as the Snapper Snatcher and the Tarakihi Terror) has come to the fore again with their latest rig, the Snapper Snack. A type of ledger rig built on the new non-offset KLT hook (see previous page), the PTFE coating assists penetration and has higher corrosion resistance. They are a step up in hook strength too, and rigs are available with 3/0 or 5/0 hooks. 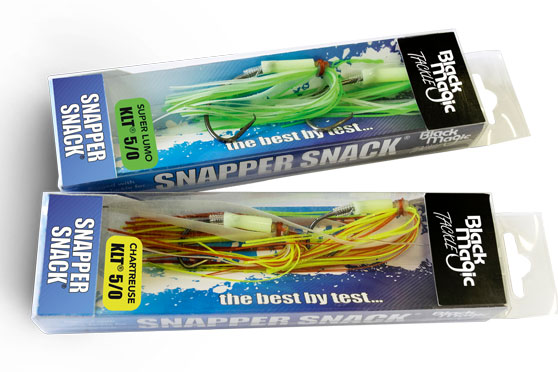 But it’s what sits on the hooks that sets this rig apart: an enticing skirt on each hook that is a combination of rubber ‘silly legs’ and long tails, similar to kabura jigs. Each skirt combination is either luminous or has high UV content, with a luminous tube over the eye of each hook adding to the attraction. Adding a small strip bait increases the attraction further. Available in five colours: Pinky, Chartreuse, Tiger, Bleeding Pilly and Super Lumo.

As a form of ledger rig, the Snapper Snack is very easy to fish. Having the sinker on the bottom of the rig allows direct contact. The KLT circle hooks are self-setting if you want to use the ‘set it and forget it’ method. This makes the rig ideal for less experienced anglers. Add to this: lumo and UV reflective material; the enticing movement of the leg material; and the flavour of a small strip-bait and you have a rig that pushes a whole lot of fishy buttons at once and has brained the snapper in the Hauraki Gulf the couple trips I have used it on. And although the Gulf is not a great gurnard fishery, (it is slowly recovering from the damage of the past) the carrots seem to like the rig as well, along with kahawai. I bet it will be effective on trevally and tarakihi too, especially in the smaller sizes. And with two droppers on the rig, the odds of a double hook-up are good, as well. 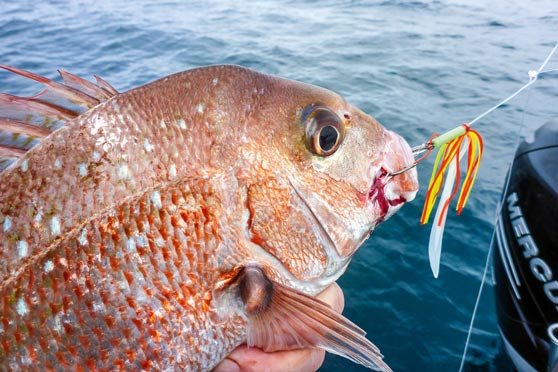 Although pink fluorocarbon options are common, Black Magic’s pink shock leader is a copolymer ‘nylon’ trace. This gives robust performance under stress and retains the high performance in abrasion resistance and knot strength seen in Black Magic tough and supple trace. It is coloured pink to be less visible, particularly when water conditions are a little murkier, and being a more affordable option to anglers than fluorocarbon. Available in breaking strains 20lb, 40lb, 60lb, 80lb and 100lb.

Black Magic Deception Ultra Pink lightweight monofilament leader is used in both freshwater and saltwater – trout, squid and more. The traditional green colour is now partnered by a new version – Ultra Pink – a shade that many recognise as being less visible to fish in certain water and light conditions.

It retains a high performance in abrasion resistance and knot strength and offers a great alternative to fluorocarbon. It is available in breaking strains: 4lb, 6lb, 8lb, 10lb and 12lb.

I have been putting this leader to the test for a month or so now and with the hot snapper bite in the Hauraki Gulf and Bream Bay and have managed to stretch it on some good fish.

The knots pull up nicely and the line feels to be somewhere between Black Magic’s Hard and Supple trace. The pink coloured line is difficult to see in the water, allowing a more natural presentation of the bait.

The leader’s biggest test came when I was soft-baiting ‘solo’ off Bream Tail aboard the appropriately named FC 535 Tackle Tester and had caught several nice kingfish to around 10kg from an on-going work-up. The 20lb leader was tied to the braid using a Yucatan Knot, and attached to the jighead using a Lefties Loop, sometimes referred to as a Rapala Knot.

I hooked and played an estimated 20kg kingfish for just under 30 minutes and had it to the boat several times before deciding it had an appointment with the smoker. I was reaching for the lip gaff to bring the spent fish aboard when a large mako shot out from under the boat, taking the kingfish and cutting through the leader. While I didn’t get the fish, it was testament to the performance of the leader which had already accounted for several kingfish without having the knots re-tied.

Over the month I have successfully used the heaviest 60 and 80lb leader for both livebaiting and presenting whole pilchards and other dead baits. It is now my go-to leader for snapper, regardless of how I am targeting them.

Dartspin is the latest advancement in ‘soft lure’ technology, designed by legendary lure creator, Patrick Sébile (A Band of Anglers). The 5ó” model is the first to be released onto the New Zealand market. Its Hyperlastic Softough body is tough, super stretchy and basically lasts all day. The body has a hook cavity moulded into it, allowing for easy rigging and hook size or style changes without destroying the soft body-material. A spinning blade on the tail adds flash and vibration, either on the fall or while being pulled through the water. Dartspin Pro are sold as single prerigged lures in four colours, while Dartspin is available unrigged in seven colours in packets of two.

My first attempt at fishing the Dartspin soft-baits with on a winter trip to fish Samoa with Greg Hopping’s Troppo Fishing Adventures, where we had a couple of sessions on the south side, out of Sinalei Resort, chasing GT’s and other inshore species.

While the GT fishing was slow, we filled in the gaps throwing Dartspin softies on lighter tackle with great success. In short, the smaller reel dwellers hoovered them up – predators like coral trout, green jobfish, bluefin trevally, red bass and the like, all of which were fun to catch on lighter spin tackle.

The Dartspins were fished on conventional half to once-ounce jigheads and they proved to be the go-to lures – until the two samples we had were ‘retained’ by good fish which took us into the coral. Two Dartspin features stood out – their resistance to the sharp denture work possessed by the reef species and the action of the leaf-shaped tail blades which I believe make these lures so effective. The Dartspins are not as flexible as some soft-bait tails, but the tail blades make up for this.

These lures were deadly on the inshore tropical species – I just wished we had had more of them! 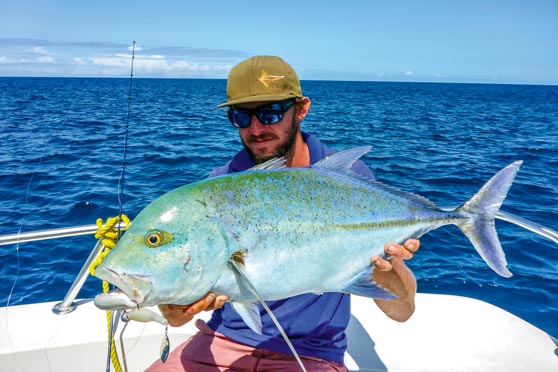 Back in New Zealand, when my buddy Mike and I headed out for a snapper fish in early spring we found no work-ups or birds, but there was a slew of midwater and bottom sign. Beautiful fish, and they were slamming the softies as they sank through the water column. Mike was using a brand well-known for being robust, while I had the pearl Dartspin. We both limited out in under an hour and were home by mid-morning, but the interesting thing was that Mike went through three tails, while I ended up with my original Dartspin still on my line. It appeared undamaged. In fact, it was the very same lure I used when I pulled a couple of snapper off the bottom several weeks later while my mates were casting poppers for kingfish. I have been impressed with these lures so far. They produce the goods and are super-tough. I look forward to exploring the potential of the new colours that have just been released. 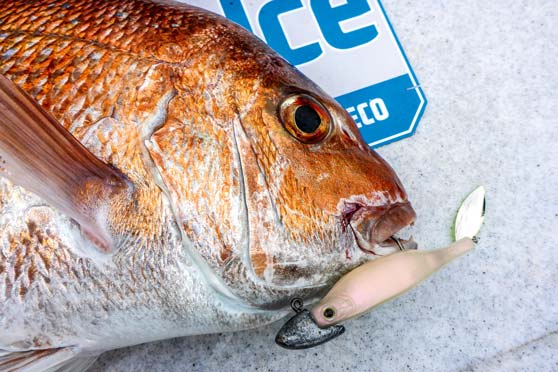 Black Magic Tackle is the exclusive distributor in New Zealand, Australia and the South Pacific of tackle innovator Patrick Sébile’s new company ‘A Band of Anglers’.

The Ocean Born Flying Series of Poppers and Pencills are designed to dramatically increase casting distance without sacrificing action or fish catching ability.

Each model features design elements such as side wings and low air friction ribs that allow them to seemingly ‘fly’ through the air, even under windy conditions. Both lures come in Floating (FL), Sinking (SK) and Super Long Distance (SLD) models, as well as a range of different colours. By changing the retrieve speed and rod action, you can pop, chug, walk or create a bubble trail, making these lures extremely versatile. FL and SK models come with 4X treble hooks; the SLD model comes with 6X treble hooks. The lures are a medium size – a good size for an imitation of a pilchard and increasing the likelihood of a strike from shyer fish. 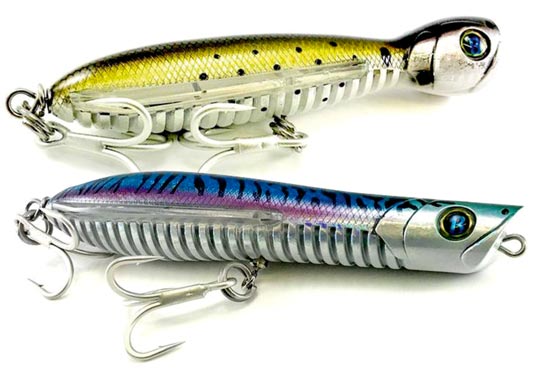 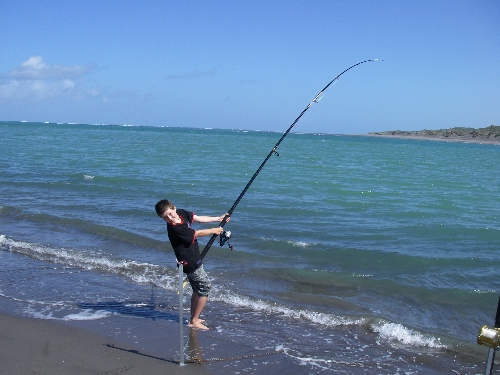