Black Magic Tackle has just released a specialist casting braid in an extensive PE rating/breaking strain range. NZ Fishing News staffers Ethan Neville and Grant Dixon have been putting it through its paces, and both have come to the same conclusion – its performance matches the hype.

Generally, the higher the fibre rating, the better the braid. Black Magic Hyperglide is a 13-strand product, which is the highest I have ever fished, so I was expecting something special.

Hyperglide is designed for increased accuracy and distance. Distance to me in most saltwater fishing scenarios is more important than accuracy. The further you can cast, the more time your lure will stay in the hit zone, and this applies equally to topwater fishing for predators like kingfish as it does to soft-baiting for snapper.

My go-to deepwater/bigger fish soft-baiting outfit is an Offshore 4-8kg rod, matched to a Shimano Twin Power 4000 SW reel, spooled with 20lb braid. It might sound a little agricultural, but I do much of my soft-baiting in 50 metres plus where you are just as likely to make contact with a kingfish as a decent snapper – I want stopping power and the ability to go hard from the get-go in what are sometimes gnarly conditions. 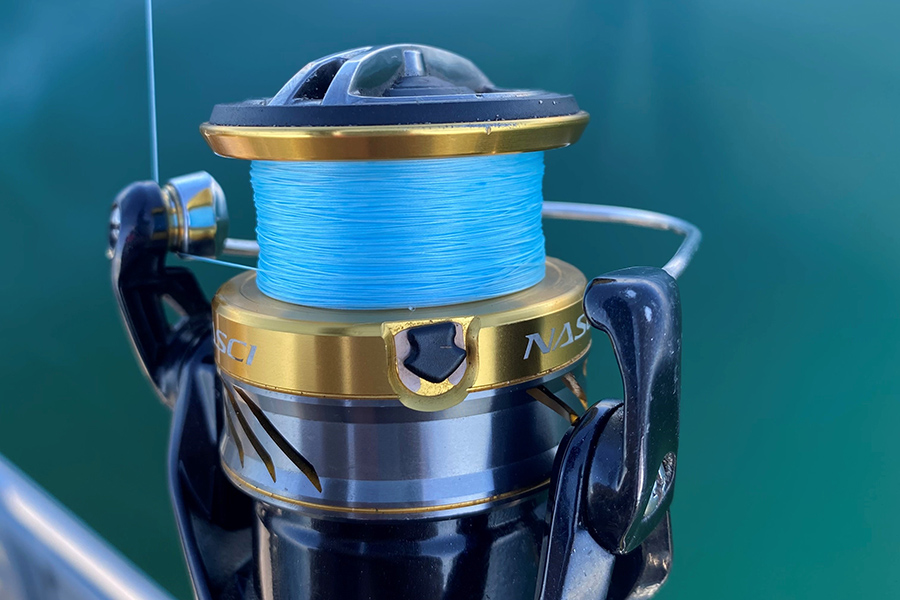 Black Magic started developing the 13x braid in 2019, and initially thought it would too expensive for the domestic market. Field testing produced rave reviews so the decision was made to go ahead and produce what is the third braid product in the BMT line-up.

Kiwi anglers appreciate that anything BMT brings to market has been thoroughly tested by various experienced anglers. This line is no different.

I replaced a good quality 8-strand braid on the Twin Power with a 300m spool of Hyperglide PE.1.2 (20lb). It had a soft feel to it and lay nicely on the spool. I liked the colour – Tekapo Blue!

Making the first few casts, my thoughts were ‘mmmm – that’s different.’ It proved quite sensitive to those little taps you often get as the lure drops. The line lays through the water nicely, enabling the angler to stay in touch in such situations. The experts tell me this is due in part to the braid’s round structure which reduces line drag through the water and the guides, delivering a high degree of sensitivity.

BMT claims this line is less prone to air knots and that its round abrasion resistant core all but eliminates internal salt build-up, ensuring longer line life. Only time will tell.

I used to believe that all lines – both mono and braid – well born more or less equal, but experience has shown me there are Corollas and Cadillacs – both will do the job of getting you from A to B, but one is much more fun and a better performer that the other. Hyperglide is that Cadillac and like most things in life, you get what you pay for.

As Grant has covered off a lot of the technical advantages of this braid, I’ll skip straight to the application – which took the form of an early-winter fish at Little Barrier.

When we launched at Omaha at first light, the plan was to target kingfish out wide before stopping in at Little Barrier for a quick soft-bait on the way home. The forecast five knot westerlies were just too hard to ignore, and one of my crew had never caught a legal kingfish, so the decision to head wide seemed obvious. After an hour of unsuccessfully targeting jack mackerel, however, I decided it was time to improvise. We shot to Little Barrier and I pulled up on the edge of one the island’s many weed lines in about 15-20m of water. I was a little nervous: we’d missed first light, there wasn’t a lot of sign and with wind against current, we were barely drifting.

I needn’t have worried. My second cast in front of the boat got hit on the drop. It wasn’t a big hit, but it was transmitted very clearly through the line. I was so surprised I forgot to strike. The next cast I was ready, and wound and pulled as soon as I felt the line coming tight. A nice pannie was on deck a minute later. Over the next thirty minutes, I managed to pull in four more, including a solid ten pound specimen which gave my reel and braid a good work out. Between the other three members on board, only one other snapper came to the boat. Before I start claiming angling superiority over my crew, however, I truly think there was one factor that truly gave me an advantage: my recently spooled 12lb Black Magic Hyperglide braid.

The thing I noticed on my very first cast was the increased distance. The braid whipped off the reel smoothly, and appeared to have very little resistance through the air as it flew towards its destination. Distance isn’t everything with soft-baiting, but it is extremely important on days with low current and wind as it gives the angler a chance to work the lure, despite the lack of drift.

The second thing I noticed was the increased sensitivity. This is always an advantage when it comes to soft-baiting. On this particular day, the bite was soft and erratic, so it was essential to stay in good contact with the falling lure and strike hard at every opportunity. All of my legal fish were caught on the drop, and only the 10 pounder really smashed the lure. This meant that I was having to concentrate hard and watch for even the slightest indication of a fish showing interest in my lure. Thanks to the BM braid, I was able to feel even the smallest of touches, and set the lure accordingly.

When you combine these two factors, the result is an increased hook-up rate. While I told my mates they were catching less fish because they are objectively worse fishermen, my honest belief is that the braid had a lot to do with it.

For a long time, I bought the cheapest braid I could find, thinking that all lines were made equal. In the last couple of years, I’ve completely changed my tune and am always on the lookout for quality braided lines. I can now confirm that I’ve added Black Magic Hyperglide to this list.

Hyperglide 13x is recommended for all styles of lure fishing from vertical and horizontal jigging, through to soft-baiting and straylining baits. The lighter options are proving popular with both squid  and trout anglers. The heavier weights are perfect for topwater casting.