In 2020, Grant Dixon was invited to participate in the exclusive release of the new Toyota Hilux range. With over 18 variants, there’s something in the line up for everyone, whether you’re a farmer, boatie, fisher or all of the above!

Since its global launch in 1968, Toyota have sold 18 million Hilux’s world-wide, including 142,000 in New Zealand. And along the way, there have been some entertaining promotional campaigns – who remembers the Barry Crump and Scott adverts, along with the ‘Bugger’ series? – iconic Kiwiana.

The 2021 Toyota Hilux features a bolder, more aggressive demeanour on most of its variants, along with a beefed up 2.8 litre turbo diesel engine that produces 15% more power and 11% more torque than its predecessor. For Toyota, variety is obviously the spice of motoring life as there are no less than 18 different variants now available, sitting within four specification levels – WorkMate, SR, SR5 and the top-of-the-range SR5 Cruiser. And let’s not forget the Mako – a hybrid special vehicle, which was delivered to an audience of awaiting press suspended beneath New Zealand’s only black hawk helicopter against the windswept coastline – all very dramatic and capped off with brand ambassadors Matt Watson and Mark Ellis cooking whitebait fritters and venison sliders.

Toyota tells us the 2021 Hilux is its most technologically advanced truck ever and covers a wide number of bases – from a basic workhorse for both town and country, through to a weekend family cruiser.

The revised exterior styling, the most obvious change being the trapezoidal grille, gives the vehicle a lower, more ‘planted’ look that says, ‘this truck means business, no matter where it is driven’. This look is complimented by smaller, more purposeful looking headlights. At the rear, there are distinctive new taillights for the top-of-the range models and there are two new colours available – Deep Sea Blue and Emotional Red.

After the initial introduction at the press drive, I picked up a Hilux SR5 Cruiser AT 2WD model for a weekend away at the family’s favourite haunt at Waipu Cove, Bream Bay – a couple of hours drive away from our east-Auckland home. The SR5 Cruiser came fitted with a lid and a bike rack attached to it – great if you are into biking, but the extra weight made access to the lid a little tricky. A first world problem, I guess!

The vehicle was SUV like inside, a great crossover between a functional work-week vehicle and a weekend warrior. I loved the leather interior, the functionality of the instrumentation and especially the multi-media touchscreen system (now a decent-sized eight-inch model) that ran the likes of the in-car entertainment, connectivity with the outside world and the satellite navigation. The SR5 Cruiser has great sounds, produced by a nine-speaker JBL system with a rear sub-woofer. 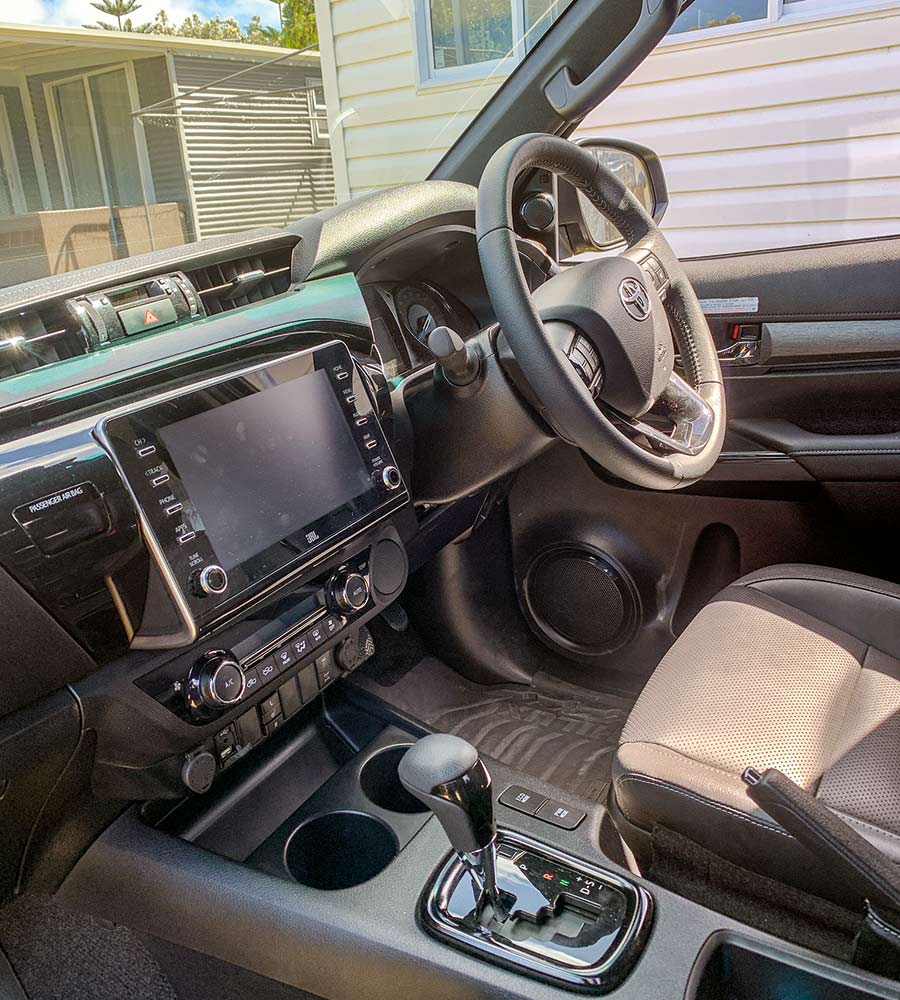 The interior is dominated by an 8” touchscreen display which, while very functional, looks a little as though it was added as an after thought.

On the dash, there is a 4.2-inch multi-information display that sits between the two main dials, giving you all the information you need. I especially liked the large digital speed read-out. The vehicle was comfortable to drive with nice easy steering, so it was a breeze to get in cruise mode and coast, especially on the open road.

I also liked the back passenger space. There would be no trouble fitting four people for a weekend away, with plenty of leg room on offer. All round, it is a comfortable vehicle to ride in, even when towing – we will get to that bit soon.

Toyota say they have ‘wrought considerable improvement’ from the 2.8-lite turbo diesel engine, coupled to a six-speed auto transmission. They say this now produces 150kW and 500Nm of power, an increase of 15% and 11% respectively over previous variants. Fuel consumption is down 11% while CO2 emissions are down by 5%. 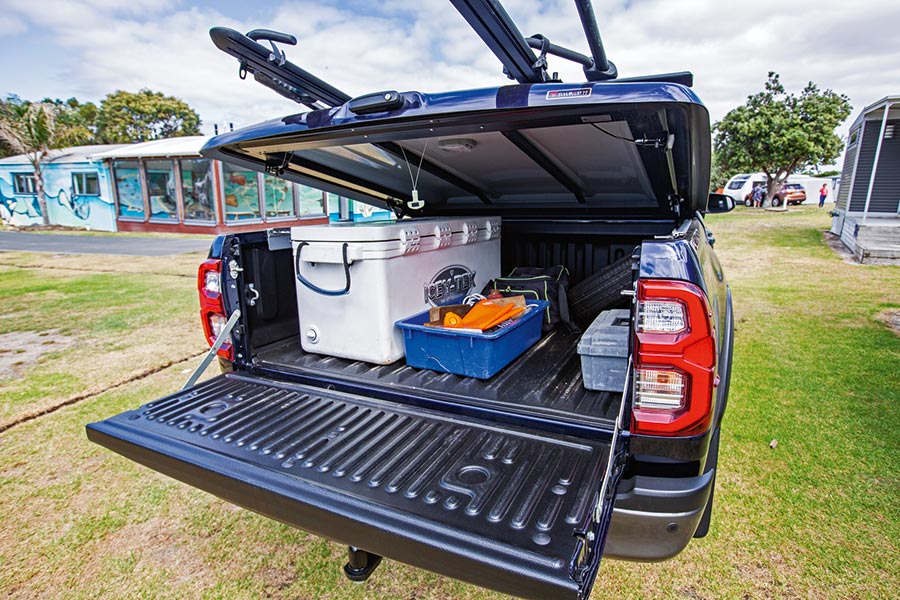 Plenty of space on the deck for all the necessary items for a fishing or family trip.

There are some options driving wise on the SR5 Cruiser. Drivers can opt between normal drive mode; ECO which reduces throttle response in favour of fuel economy and reduces power consumption for heating and cooling; and POWER to provide sharper acceleration and a ‘more engaging response’ through undulating and twisting roads.

For our weekend away, I had intended to tow the company’s project boat –an Extreme 745 Centre Console that weighs an estimated 2.8 tonne and a fair test for a vehicle rated to tow up to a braked 3.5 tonnes. Backing up to the boat using the camera – a practical feature I must add – I was about to hit a snag. Lowering the hitch onto the towball, I began winding up the trailer’s jockey wheel. Fully wound up, it was still firmly on the ground, so much so that even after ‘assisting’ the truck with a block of wood, I couldn’t get the boat hitched – bugger!

Plan B was to grab my own personal vessel, a much lighter FC535, which at around 1.2 tonnes fully fuelled and loaded, is hardly a test for a vehicle as capable as the Hilux. On the trip north, we hardly knew it was on the back.

Toyota tells us that the rear suspension has been ‘improved with longer leaf springs to suppress vibration, wider spring spacing for improved stability while cornering under load and revised attachment points to promote steering stability.’ All well and good, but you must be able to hitch it before towing it. Trailer Sway Control comes as standard on all 18 Hilux variants and while I didn’t drive at night while towing, the auto light levelling function is a big plus.

Hitch issues aside, I enjoyed having the SR5 Cruiser for the weekend away. It was comfortable to drive on the open road to the point it was easy to forget you were in a ‘truck’. It has nice lines and with the SR5 Cruiser bling, looks far less agricultural than its predecessors.

For more information go to www.toyota.co.nz