Why skipjack tuna is a versatile bait

For snapper fishers in particular, skipjack tuna – sometimes incorrectly referred to as ‘bonito’ – is one of the most versatile and cost-effective baits available, suggests editor Grant Dixon…

All of the fish can be used in one way or another – cut baits; strip baits (especially the belly flaps); the head; and in some circumstances, as a whole bait. And when you are down to just the frame, the flesh can be scraped to add a little substance to your berley trail. 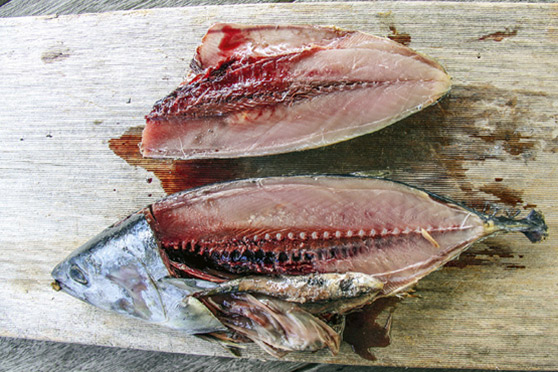 Once the fillet has been removed, the slab can be cut up in a variety of ways.

Over the years I have gone out on ‘bait missions’, targeting skipjack tuna on the troll with small lures, to stock up on tuna for winter snapper fishing excursions. Running a lure on a bungy while gamefishing is another way to stock the bait freezer. While these days I don’t do as much winter bait fishing, it can be just as easy to head down to your local bait store and pick up what you need trip by trip.

While on a trip to Mexico some years ago, we used whole tuna as bait for snapper – cubera snapper. These were rigged on a wire trace with up to three XOS treble hooks

Backing up to the reef area, the crew would begin chunking large lumps of tuna and the bait would be ‘straylined’ back on a Tiagra 50, the angler fully harnessed up.

When you got a bite, the lever drag would be pushed up to sunset and the boat would be driven away from the reef in the hope of pulling these powerful fish from their comfort zone.

These were big fish and they occupied a brutal neighbourhood. Cubera fight hard, even when you get them away from the bommies – the ultimate snapper angler’s adversary!

Bait fishing for our snapper is a little more refined, thank goodness.

Skipjack tuna have long been a go-to bait for Kiwi snapper anglers. While fresh is best, good quality frozen bait can be just as effective.

I like to thaw my tuna before cutting it up. It is safer and the fish is much easier to work with. Trying to cut through frozen flesh is a recipe for disaster and it is difficult to create the exact bait you want.

My favourite big snapper skipjack bait is an XOS strip straylined down the chum trail.

Remove the fillets off the frame and depending on the size of the fish, you will get two to three elongated baits by slicing the length of the fillet. 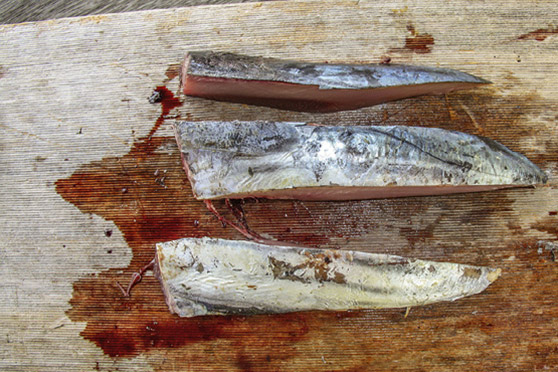 When fishing for bigger snapper, these long strip baits are perfect.

If the tuna is a large one, you can trim a little of the flesh off the fillet to make it easier to work with. This flesh can be chunked up and dispensed down the berley trail.

If you have been following this series, you’ll know I like to use a double fixed hook rig with the sinker in the nose of the bait. It is a universal rig that suits most larger whole and cut baits. A sliding second keeper hook is an option, but as I am always looking for that trophy fish that might put me in the IGFA record books, I stick with the fixed hook option. 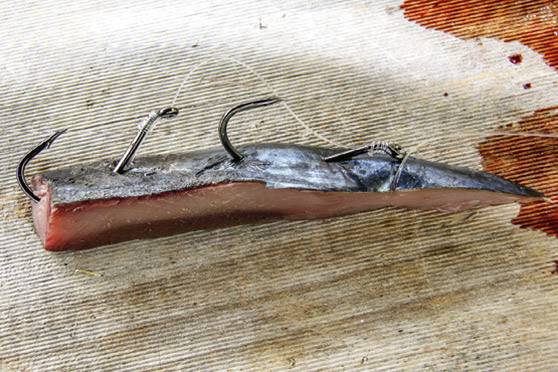 The writer prefers a double hook rig to get maximum coverage of the larger strip baits.

An appropriately weighed sinker – depending on the current flow and the depth you are fishing– sits on top of the bait and pegged in place with a toothpick through the hole, to prevent the weight sliding up the trace and tangling with the mainline as you drop or cast it back.

Rigging a bait this way and leaving the sinker out of the mix is a great way to fish for those bigger, shy fish that will sit at the back of the berley trail. Cast the un-weighted bait out and let it sink naturally through the water column – deadly! When you have a big skipjack to deal with, you may need to trim a little flesh off the bait so as to not 'choke' the hook and leaving the point and barb unimpeded.

Many bait anglers swear by the head of a skipjack as their go-to XOS snapper bait. I have never had any luck with this when targeting tournament-winning snapper, preferring a large, fleshy strip fished back down the trail using an overhead reel, and with just the slightest amount of thumb pressure on the spool to control the descent.

When a decent fish picks up the bait it will generally turn and move away. Give it a little time to get the bait down before engaging the spool and setting the hook.

Depending on what hooks you are using – conventional J-hooks or circle/recurves – this will be slightly different.

With J-hooks, the strike can be as firm as you like, to set the point. With recurves, it needs to be a little more subtle. Fishing with a lever drag, the line pressure can be increased gradually to roll the hook in the corner of the fish’s mouth. Too sudden, and the hook will be pulled out and away, unable to do the job it was designed for.

When fishing whole or half heads – slice them down the centre to create the two baits – the first hook can be set into the top of the head, the second fed up through the bottom of the jaw, the point and barb exposed out through the top jaw. 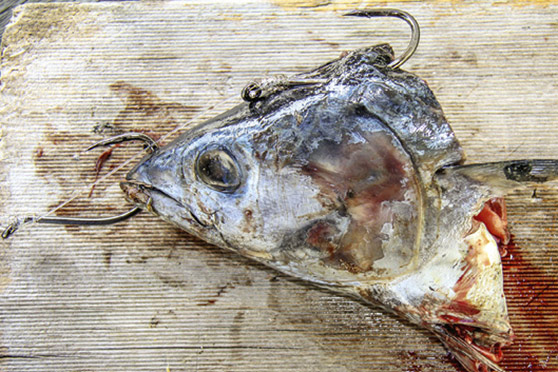 The head can be fished either whole, or sliced down the middle to create two baits.

It is hard to go past firm skipjack baits when fishing a ledger rig. It is important that the point and barb are exposed, so you may need to trim a little bit of flesh.

Fillet the tuna and then cut diagonally across it, ‘steaking’ the fillet to the thickness of bait you desire. This might be just a couple of centimetres square for tarakihi, bigger for snapper and then either a whole ‘steak’, or even a strip bait, when targeting the cellar dwellers – the likes of hapuku, trumpeter, bass and bluenose. Whatever you are targeting, always put the hook through the bait just once to maximise hook-up opportunities. 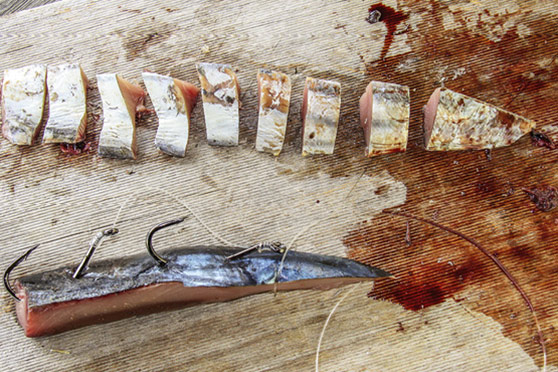 The thinner belly flap section of the fillet is perfect for cut baits.

As mentioned earlier, the frames can be scraped, the flesh added to the berley trail and the backbone cut up to provide a little more substance to the chum trail. The same applies to the gut which can be chopped up and added to the mix.

Some anglers save the frames, head and gut and when they have enough put it all through a mincer to create their own special berley brew.

Skipjack is a perfect bait for salting down. Cut your baits to the preferred size and place them in a container – one-litre icecream containers are ideal – in layers, throwing in a handful of butcher’s plain salt between each layer.

This toughens the bait up and will preserve it on extended trips where refrigeration is not available. You don’t need to freeze the containers if salted down properly – just keep them out of the way of your dog and in a rodent-free area!

Skipjack is available in pre-salted packets from the likes of Top Catch stores if you can’t be bothered preparing your own.

As you can see, skipjack tuna is a versatile bait. Live, it is marlin candy. It can be rigged whole for broadbill and sewing fresh tuna belly flaps into a gamefish lure hook rig adds a natural element to an artificial offering.

And for the inshore baitfisher, it is hard to go past the juicy, oily flesh of skipjack tuna. 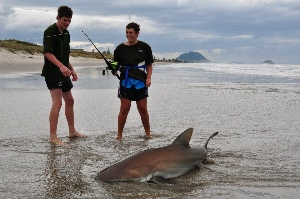 land based bronze Whaler caught on half a bonito - papamoa beach