For Peter Langlands, there is something magical about wharf fishing. In this article, he shares some of the key things he has learnt fishing off wharves in the South Island…

Summertime is the time for fishing off wharves and taking time to relax with friends and enjoy the sea air. The constant bustle of people, fishing boats coming and going and, of course, the ever-present schools of fish ensure we always have a good time. I also enjoy the relaxation of being able to set up and concentrate on fishing in one spot for a few hours, which is quite a contrast to constantly walking and moving when back country trout fishing. I also really enjoy catching “baitfish”, which are increasingly making it onto the main plate as a healthy and tasty eating option. Here are a few key things I have learnt fishing from wharves in the South Island which will hopefully make your next wharf experience – no matter where you’re fishing – more successful!

Summertime is undoubtedly the best time for fishing off wharves with the greatest abundance and variety of fish around. Many fish in the South Island are seasonal in shallow water and the period from December to February is the prime time for wharf fishing. Baitfish thrive and I especially enjoy catching garfish on a hot summer’s day. Wharves can provide a range of wildlife encounters.

The tide is important and overall, I have generally found the three hours either side of high tide to produce the best fishing off wharves. Sometimes the fishing can be slow on the slack water periods but the few hours when the current is moving around the high tide often bring success. As many wharves are situated in shallow water, the low tide period is generally not productive. Warm days with light winds are generally the best weather conditions to fish, and good weather certainly makes it easier to concentrate and enjoy the fishing!

One of the joys of fishing from wharves is that you can use a lot of gear, fishing up to four rods with specialist rigs, and each targeting different species. If the wharf becomes busy, however, you may need to go back to one or two rods. For that reason, I often fish off wharves either early or late in the day. Placing bells on your rods when fishing multiple rods is a good idea. I will generally place out two surfcasters with baits for rig, which are widespread and encountered off many South Island wharves and breakwaters in summer. Placing out livebaits can also be effective as many predatory fish are attracted to wharf environments around the high tide. Casting out wide from the wharf and covering ground to pick up species likely to be encountered at a low frequency is another good strategy. I will also often fish closer in using a rod with a float and small baits placed in mid water, as well as actively fishing one rod with sabiki jigs. You can also place down pots for catching crabs and shrimps which the kids always get excited by. A throw net is another very effective way of catching fresh baitfish (yellow eyed mullet, piper and mackerel). You can certainly kit up with a bit of gear when wharf fishing, and trust me, this will make time fly!

Since you will be fishing from a stationary position, another key aspect of wharf fishing is placing berley in the water upon arrival. Using caged berley pots with slow release berley is the way to go. Not only will you attract baitfish but over time you will also attract predatory fish. For the cost of $10, a berley roll will often be the difference between success and failure when fishing off wharves.

Wharves are great spots for spending time with the family and ideal for kids over the summer months. If you set up well at the start, then time will pass quickly as there is always something interesting to get distracted by. As mentioned, you can use a variety of techniques when fishing off wharves, so can take the time to explain and show children some of the key ones. Wharves are also good environments to show kids a diverse range of fish and how to effectively release undersized fish. Wharves are good spots to teach kids about fishing.

Some top wharves in the South Island are Picton (for mackerel and fresh baitfish); any small jetty in the Marlborough Sounds (for snapper and gurnard over the summer months); the outflow jetty at Lake Grasmere (a top blue moki spot); Kaikoura Wharf (for a wide variety of reef and bait fish, as well as blue moki on the high tide); Brighton Pier (a top all round wharf but best fished on high tide – a good spot for rig, elephantfish and getting paddle crabs); Diamond Harbour (good for a variety of fish but avoid during busy times of the day as a ferry service operates from here); Lyttelton Breakwater (for XOS rig, sharks and rays); Akaroa Harbour wharves (good for escaped salmon, kahawai, rig, skates and large numbers of yellow eyed mullet); Timaru Breakwater (a top spot for school sharks, rig and elephantfish over the summer); Oamaru Harbour Wharf (a top spot for blue moki and lots of mullet); Otago Harbour wharves (the wharves in the outer harbour are top spots for blue moki and the inner harbour wharves/waterfront provide good opportunities for catching salmon over the summer months); Bluff Harbour (blue cod and salmon often turn up but a massive range of fish can be found here); Jackson Bay wharf (an outstanding west coast wharf fishing option on an otherwise very exposed coastline, and a place where literally anything could turn up); Greymouth and Westport wharves (some big red cod show up here over the cooler months but kahawai, searun trout and salmon are around in summer, as well as massive shoals of mullet); and Motukea and Nelson wharves (a big variety of fish can be found here, including snapper and kingfish). 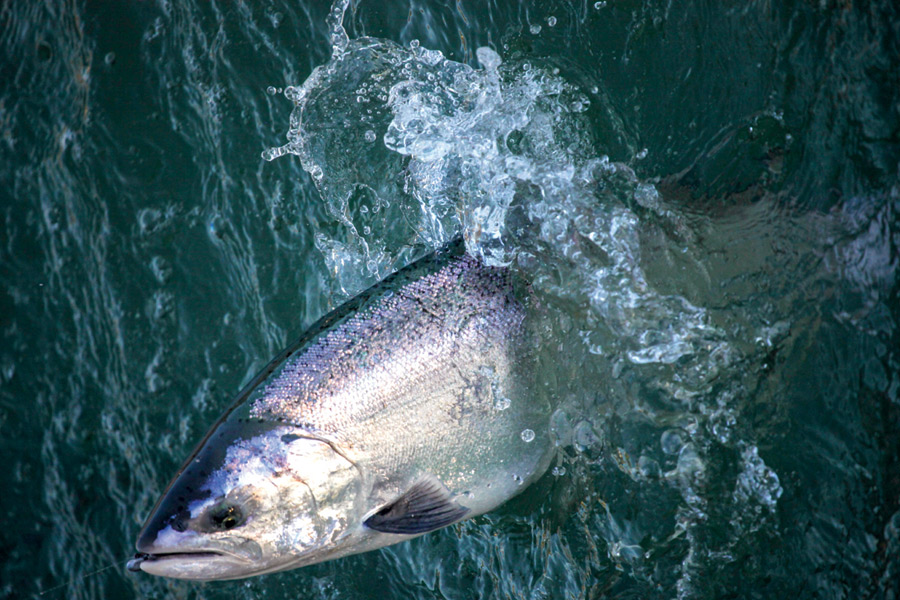 Salmon are a prime species to target off the wharves in Otago Harbour over the summer.

Finally, do not underestimate wharves. I just love the experience of settling in for a day’s fishing on the wharf and working the top half of the tide. As wharves can be exposed places it pays to take some warm clothes and as you will be looking over the water, some good quality polaroids and sunscreen. Also take some chilled refreshments and a chilly bin with some ice (you can replace the drinks with fish in the chilly bin). Be aware of others on the wharf. It is often a good place to meet and talk to other fishermen and a good way to tune in with local happenings. So, take the time to check out some local wharf fishing options this summer with the kids, family or some friends and take a moment to relax and catch some bait for your next fishing trip or, if you’re lucky, the evening meal.