Using squid as bait during the summer Summer is the right time to use any winter squid you haven’t eaten, to target other species, writes Jun Park, Rudee Lim and Ben Tupaea.

Summer and fishing is in full swing, with everything from small jack macks to the magnificent marlin being caught left and right.

In contrast, our friendly broad squid are almost nowhere to be seen! The odd specimens can be caught from time to time in deeper waters and at more remote locations, but the majority have passed on after spawning in spring. The lifecycle of the squid is such that currently a new generation of squid are developing, so squid jigs do little good during summer.

That’s fine, however, as it gives squiddos an opportunity to take part in other facets of warm-water fishing. It is a great time to deploy any extra squid caught over the colder period. Bait fishing can get quite messy, but broad squid, when prepped properly, is a clean and effective bait. It’s great to use when you want to sneak out for a flick while out with family and/or friends and cannot take a mass of gear and bait.

Many people are probably asking why use tasty food-grade squid as opposed to frozen squid bait from stores? The latter can be very thin and soft so it falls off rather easily. This is particularly problematic on days with a lot of pickers, as it simply does not last long enough in the water for the bigger fish. When surfcasting, the bait often flies off the hook while casting. Sometimes, not even binding can fully address this.

Furthermore, when the fishing is slow, broad squid appears to make a big difference in triggering the bites. We are firm believers that quality bait equals quality fish.

There are limitless ways in which broad squid can be used as bait, but we mainly like to use it for surfcasting and deep drops. As we also love eating squid, we try to draw the line here, so as to not get too carried away and use all our hard-earned catch as bait.

Starting with surfcasting, we like to pre-cut and pre-pack our squid. We do this by cutting the squid into small rectangular strips approximately 4cm by 1cm and storing them in a re-sealable bag. The wings can also be cut and used in the same way. 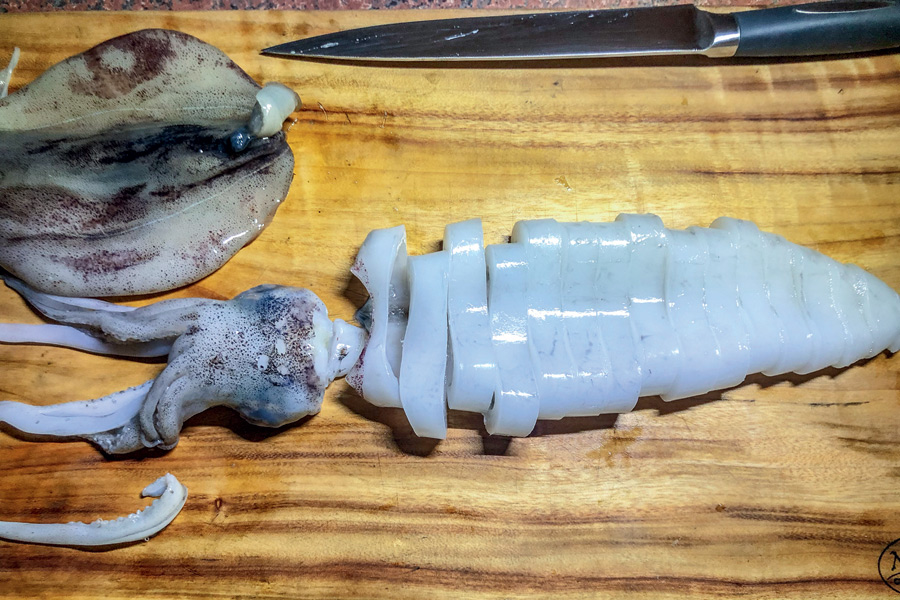 The process of our catch being made into bite-sized strips for fishing.

Using this method, a single squid can net us many baits. These baits fit perfectly on a circle hook size 7/0, which is generally what we use on our surfcasting rigs.

Once thawed, the strip is stretchy and strong enough so that binding is not required while casting. A small piece of bait also allows longer casts. From experience, big baits do not always necessarily catch the biggest fish. Most often, legal-sized fish and up are caught on this set up.

Using pre-cut bait is also great when using ledger rigs from small dinghies, especially those without a bait board. Spending less time messing around and cutting bait means more time to sit down and take in the view.

There is the added advantage of being able to bring any leftover bait home to use another time. Packs of squid, pilchards, etc. bought from the tackle store often have to be thrown away as it gets awfully smelly and messy by the end of the day. 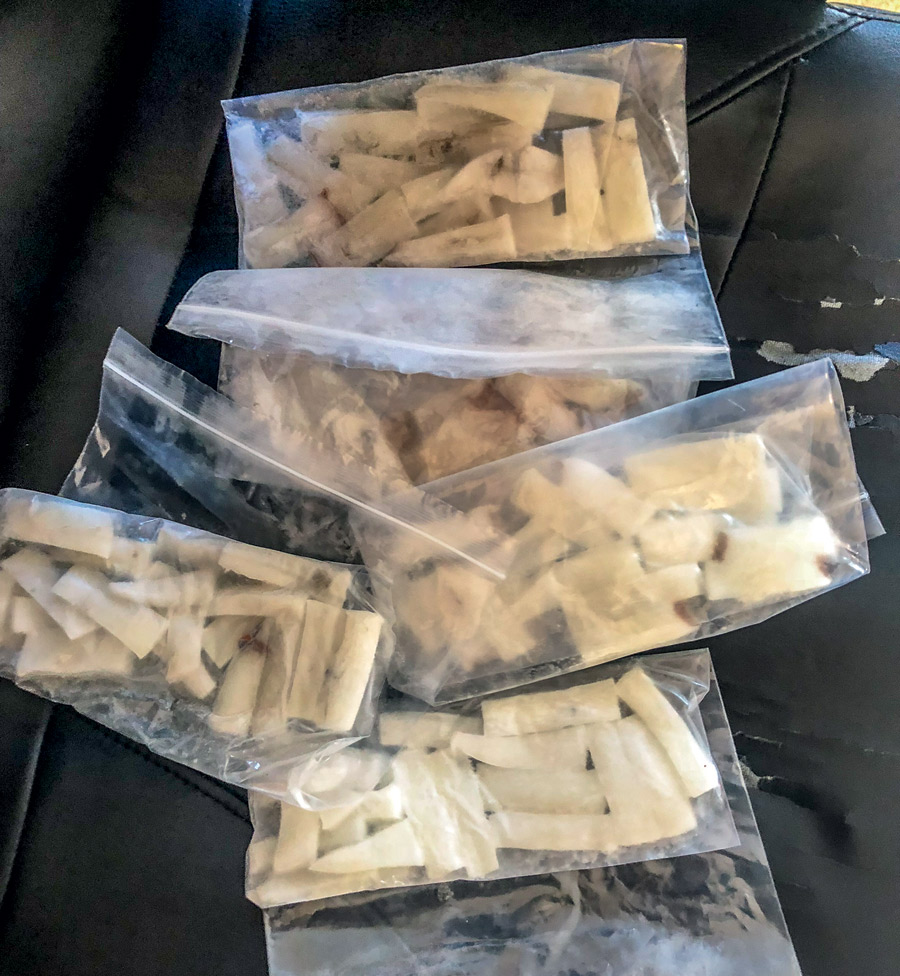 Squid strips all packed and ready for future surfcasting sessions.

On that note, we find when we use fresh squid we catch a smaller number of sharks than we do using smelly bait. This is particularly noticeable during summer. This is probably due to the lack of blood and gut scents from the squid.

We tend to release squids that are too small for eating whenever possible. However, some come up damaged by the jigs, so we keep and store them whole in the freezer to use for stray-lining snapper and deep drops for bass, hapuku, bluenose, etc.

We have found that you don’t have to use a particularly large bait for deep water fishing. In fact, a small broad squid chopped in half and put through the hooks once in a normal deep water set-up has netted us some great specimens.

This practice can be extended to the 500g Squidwings lures as well, to enhance its efficacy. Not only that, but we also catch all sorts of other deep-water species using this method. We think that the smaller bait gives a better hook up rate, too. 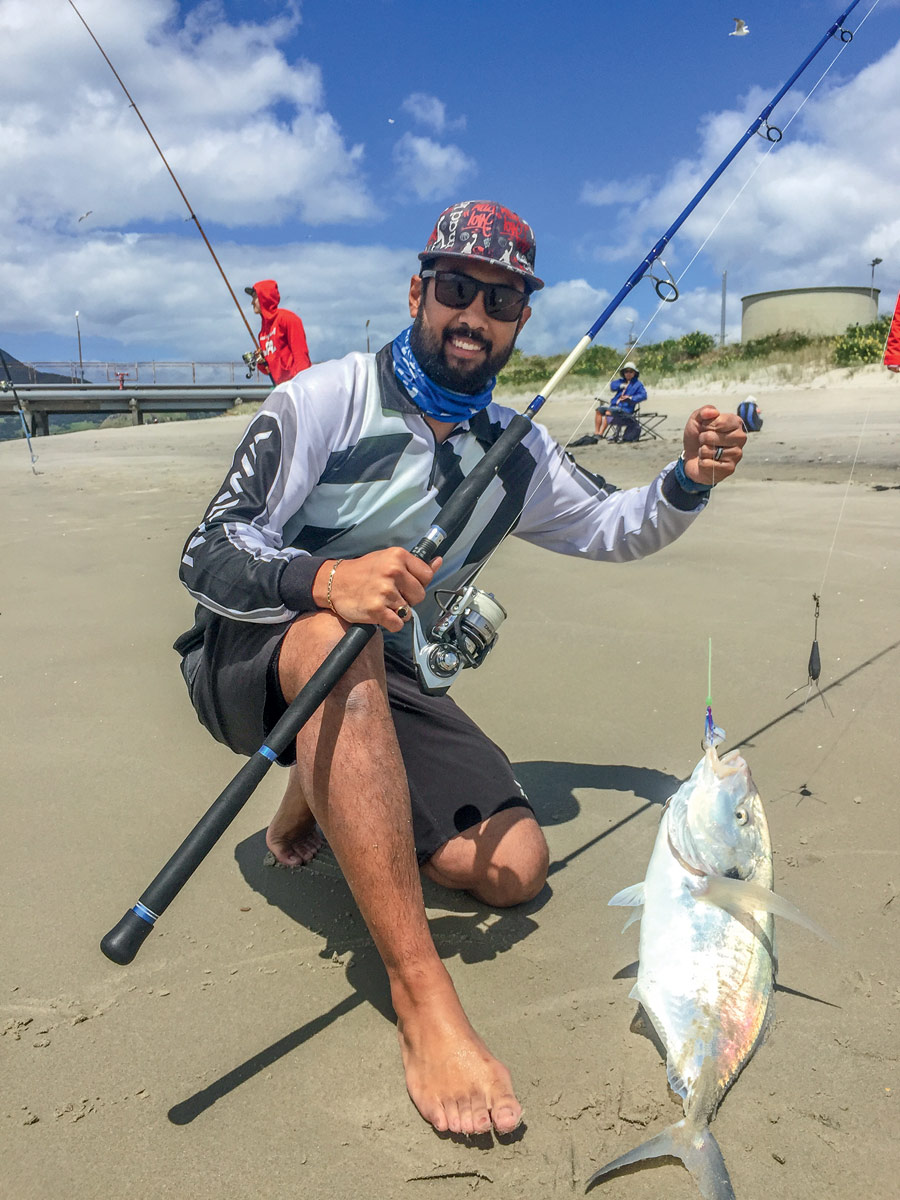 Rudee with a nice trevally off the beach, showing that small bait can result in decent fish.

Putting fresh broad squid meals on the table will no doubt always be our number-one option, as nothing beats the taste and feeling of catch ’n’ cook. However, translating a catch into an even bigger catch is also a very rewarding!

Over the years, using the squid we’ve caught has saved us a lot of money by reducing the need to buy bait. Although squid jigs get lost in the process, we feel there is a net positive saving due to the sheer amount of bait that can be produced from one squid, which offsets the cost of losing jigs.

It won’t be long before the water temperature starts to cool again, so it’ll be time to bring out the eging rods and jigs and stock up on quality food and quality bait.