Greg Morton has experienced his fair share of new gear over the years, including the ever-evolving spin set-up…

The 2018-19 freshwater season is now into summer and to date, when choosing a fishing weapon to help me outwit the local trout, it has invariably been the spinning rod I have reached for.

The reason is simple. New technology means it is the perfect all-round tool, and in league with new reels, super non-stretch line choices, new fishing techniques and a plethora of soft- and hard-body lures, it can deal to virtually any fishing scenario on lake, river or estuary.

Sadly there have been rod redundancies in my garage as a result of new technology. Gone are the stiff, short spinning rods, replaced by more responsive rods designed for what is described as ‘finesse fishing’. Fly rods survive because they are fun to use, but several times I have turned them into hybrids by using a spinning reel on the rod. The fly rod’s length can be a real asset when fishing with floats or wanting to keep line off the water when drifting rigs.

Spin anglers were once derided as ‘chuck and chance’ meat hunters, but how the worm has turned! Light tackle threadliners are now using techniques based on the premise ‘think like a trout’ where each cast is part of a plan of deception. Catch-and-release is common and many count dry flies, nymphs, streamers and wet flies among their armoury. Braided line has been the game changer, both in freshwater and in the briny.

The three spinning rod outfits I most often reach for now are the following:

3) A four-piece Shimano Backbone Elite that is two metres long, ultra-light and has a line class of 2-4kg. All are a far cry from my heavy old spinning rods of yesteryear.

My reels (a mixture of Daiwa, DAM and Shimano in sizes from 1000 to 3000) all carry variations of braid with fluorocarbon leaders. The workhorse size is 2500, though when wanting to retrieve ultra-slow I find it easier to use a small reel rather than try and make my hand slow down. Everything is light and each rod-and-reel outfit can be balanced on one finger.

Various spinning techniques are used and when I’m fishing with flies I use casting floats.

Most past fishing authors tended to be fly-fishing aficionados only, but one who bucked the trend was Tony Orman who wrote the book Spin Fishing in New Zealand, published in 1987. He was ahead of his time and the following quote from this classic book was very prophetic. Yes, I have my own copy and often refer to it for technique hints.

“Threadline fishing’s potential and its true worth as a sporting method of trout fishing generally has not been recognised. This is also the case with sea fishing where light threadline or spinning tackle can produce the finest of sport in terms of skills and challenges, as well as bringing, with its finesse, very productive results.”

These two sentences were written over 30 years ago and he was spot-on in his thoughts. Shame fish stocks are not like they were back then!

Two chapters I took notes from years ago were one labelled ‘Fly on Threadline’ and one labelled ‘The Case of the Counterfeit Bugs’. Their content saw me using floats a lot with my spinning rod and getting involved with soft-plastics from an early stage. When braid came along, it just made both strategies so much easier to enact.

Modern floats, such as the Adjust-A-Bubble, are useful with a spinning rod in so many ways, working with artificials like flies and soft-plastics and also with natural bait.

A few years back when I lived in Christchurch, some mates and I used to fish the West Coast, in particular Lake Poerua near Moana. It was a good brown trout fishery and 1.5kg trout were often observed cruising the shoreline after rain looking for any worms washed in from the farmland pasture. The problem was that bait fished on the bottom tended to get lost in the weed and trout just didn’t see it. Bullies also took baits on the bottom. 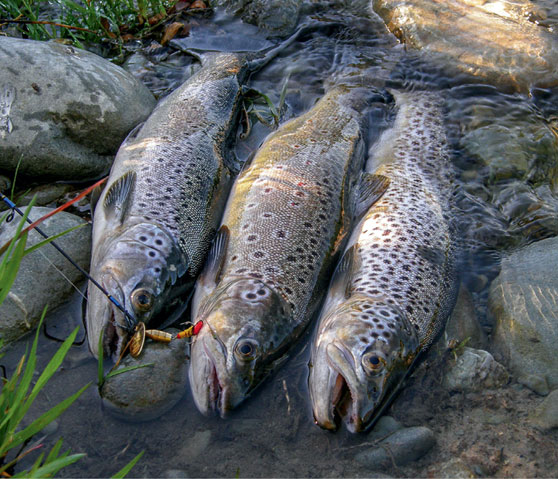 One year I went over there with some milk worms and fished them under a casting bubble with some split shot on the line to sink the worm about a metre down. I half-filled the bubble and then cast it out in a likely spot. When I saw a cruising trout on his way I would slowly twitch my worm back towards shore. Twitch, twitch and then pause, then the same again.

Often during one of the pauses I would see the bubble twitch and I’d wait for the trout to eat the worm and to move off with the bubble. Then I would tighten up… and bingo, trout on! I caught some good bags of trout this way.

It’s interesting that today pauses, twitches and lift and drop are such a part of fishing in general. I had a laugh the other day when fishing a dry fly behind my casting bubble. Trout were rising freely so I had my eye glued on the fly. Then there was a big splash right where my gear was but the unseen trout had engulfed the bubble. It popped back up pretty quick as the trout realised its mistake.

The other real strength of modern rods, reels and lines is improved casting distance. When using Nanofil line, for instance, I can whistle lures out phenomenal distances. For landlocked salmon, estuary fish and migratory salmon, distance casting can make all the difference. 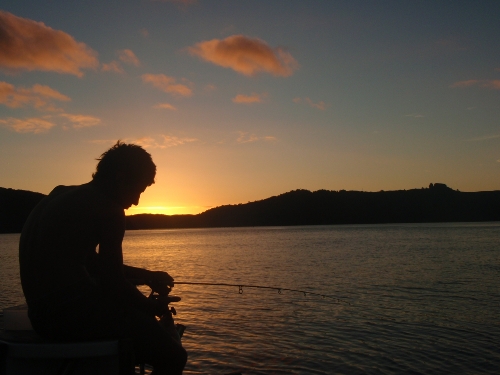 Photo taken on 1050 sw before it was stolen! - Great barrier island