Arguably the biggest of our baitfish regularly caught and utilised in a variety of ways,
Mark Kitteridge looks at the role of skipjack tuna in the sport-fishing scene
and how to secure them.

Over two-million tonnes of skipjack tuna are caught annually in the Pacific region alone. I therefore suggest you catch a few for yourself – while you still can, perhaps...

Some people wax lyrical about the skipjack’s eating qualities after bleeding and icing it down, then eating it raw as sashimi once nicely chilled – but I’m only modestly on board with this sentiment. Instead, I prefer to use this small tuna as bait. After all, there isn’t much better.

I’ve often written about the sorry sight a skipjack typically makes when dredged from a bait-selling outlet’s freezer (where it tends to be erroneously labelled as ‘Bonito’), its silvery skin frequently flailed away to reveal the pink flesh beneath. You’ll know why if you’ve caught them before: upon landing, their tail goes absolutely nuts, vibrating backwards and forwards unstoppably (try holding them – it’s virtually impossible), often with blood going everywhere. Therefore, being amongst thousands of other small, strong tuna doing this simultaneously in a super-seiner’s net wouldn’t be nice! While these frozen and skinless abominations will still catch fish – plenty of them in fact – a recreationally-landed skipjack is a very different animal if quickly iki’ed, iced down and then frozen. Upon thawing, you’ll find the skipjack’s grey-silver skin is actually relatively thick and robust, although that’s just a small bonus to the incredible oil and flavour content this tuna has (something you can see when it contacts the water, with an oily sheen blossoming outwards). These qualities make it unbeatable as strip baits cut to suit various table fish, from tarakihi and snapper right through to bluenose and hapuku.

However, many other skipjack tuna are kept very much alive in tuna tubes for use as live baits when targeting marlin, their silvery, flashing sides and fast, nervous vibrations often proving irresistible to them. In fact, even when freshly dead, marlin will often still take them, but they’re better suited to targeting sharks and broadbill in this state.

Yes, dead or alive, fresh or frozen, skipjack tuna make superb bait – but how can you catch them? The three most effective ways are as follows: trolling on rod and reel; trolling with a bungee handline; and spinning with a casting rod and reel.

No doubt about it, especially when the marlin action’s slow, trolling a little skippy lure out the back can be a lot of fun: hook a 3 or 4kg model on a 10kg outfit and you’ve got a decent battle on your hands – let alone a 5 or 6kg specimen (or even bigger; we’ve caught skipjack to 15kg here!) on lighter gear.

Lures are typically small – no bigger than 10-12cm – straight-running, and generally fitted with a relatively heavy metal head so they stay in the water. Skirts can be vinyl or feather in myriad colour combinations, but over the years I’ve found pink-white to be the most consistent, followed by other popular combinations such as black-purple (very good for albacore, too), green-black, and pink-blue.

Whatever the lure chosen, it needs to be rigged on two to five metres of 27-45kg (60-100lb) trace, and armed with a decent-sized claw hook. Note that this hook is not IGFA compliant, but it makes a huge difference to the number of tuna that end up in the boat, so I don’t mind (single hooks frequently rip out – very frustrating when skipjack are few and far between).

A small swivel allows the rig to be joined to the rod and reel: either a 10-15kg outfit if sporting enjoyment is part of the equation, or 24kg if simply out to ‘fill the freezer’ or when in blue, warm marlin water, as the next striped marlin to eat a skippy lure or hooked tuna will certainly not be the last!

The biggest advantage (and disadvantage) of this method is that the lure can be presented well back from the boat in relatively clear water, where even the warier tuna will happily bite. This means the lure is often set at the rear of the marlin lure pattern, out to one side, so tangles are less likely to occur – hinting at this method’s major disadvantage. After all, when catching skipjack you’re also often in the right area for marlin, so every time a tuna is hooked the boat must slow while it’s being fought, and other nearby marlin-trolling gear cleared to avoid potential tangles, interrupting your marlin-fishing chances. Then, having netted and stored the catch, you must get underway and reset the lures again – actions that can quickly become tiresome and frustrating if someone wants to continue catching small tuna. 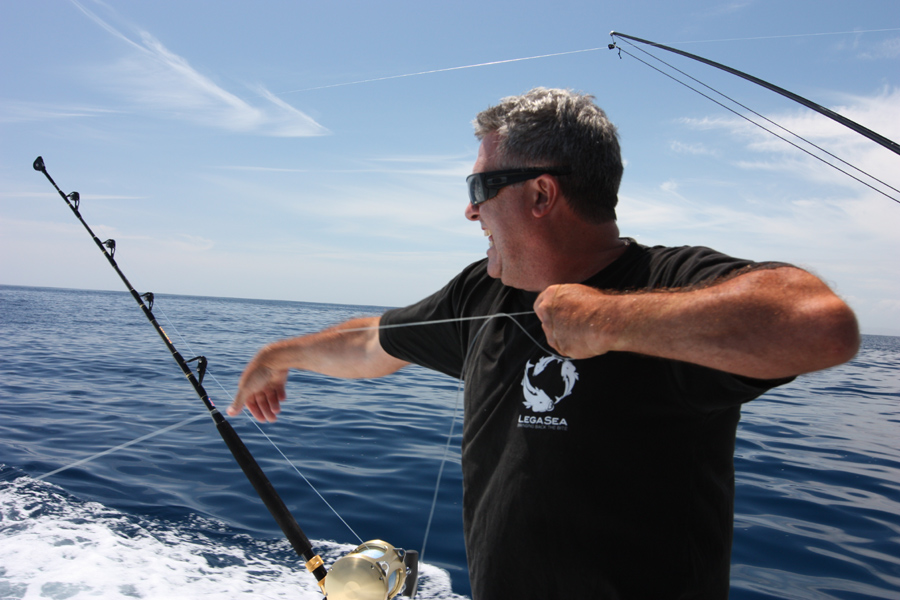 That’s why I prefer catching skipjack on heavy-cord bungee lines. Sure, they don’t offer the same sport possible with the light tackle and are not as effective at attracting bites, but you do get to keep marlin fishing the whole time, and the physical hand-to-hand combat has a very different appeal that’s still addictive. Here, effective fishing involves setting the usually metal-headed lure in a close window of clear-ish water ahead of the marlin lures. When you get a strike, signalled by the bungee stretching out, the main trick is to keep the tuna skittering across the surface while retrieving it. If you’re lucky, the boat’s momentum will see the tuna already up on the surface splashing, enabling a quick succession of one-wrap line grabs and dumps to skip it back to the boat. Otherwise though – and unfortunately this tends to happen with the larger models – you’ll need to wrestle the fish up to the surface yourself, although the boat’s forward momentum will increasingly aid you as the fish is brought closer. Then, once it’s up and splashing, don’t pause or miss a grab as the tuna will power back down again – a bad scenario, as their very soft mouths mean hooks can rip out at any moment. While this also means a swiftly and competently wielded landing net is advantageous, most bungee fishers go for speed instead, hoping to get the line back in the water while the tuna are still present and biting. This entails simply lifting the tuna straight over the stern and into a barrel, then sliding it up to the barrel’s edge and positioning the claw hook so it is inverted with the tuna dangling down. The combination of tuna’s own weight and continued thrashing usually sees it fall free of the hook(s), enabling the line to be speedily deployed again.

In between fish-grappling duties, it pays to kill your wildly vibrating catch with an iki spike; it’s more humane and you’ll avoid having blood spatters spread throughout the cockpit. First, place one hand firmly up skipjack’s gills, before locating the small, dark triangular shape at the top of its skull. Now mentally picture the angle required for the spike to come out the centre of its tail, and in you go. Dead. Instantly.

I don’t recall seeing good, complete bungee lines for sale, but I’m sure there must be. However, I’d rather make my own anyway, as the various components and measurements I use work well together, providing just the right amount of water-cutting (so it doesn’t get swept aside by the wake) and hand-purchase qualities, as well as being sufficiently strong and robust for even a decent albacore to be landed. Space precludes me from going into all the specifics though, so check out my diagram below and take my word for it.

I don’t see many people casting spinners out to skippies, which is surprising as it’s great fun and often very effective!

For me this scenario generally occurs upon stumbling across schools of skipjack while chasing species other than game fish; light spin outfits connected to skippies with their afterburners fully lit up equals too much fun to pass up.

However, it’s also a very useful technique to employ when slow-trolling live baits. As most game fishers know, these baits eventually tire and must be replaced, so if you don’t have more at your disposal, you’ll need to catch fresh ones, creating a potential problem. After all, the ideal speed for towing live baits is only a couple of knots, so a standard skipjack trolling lure – which needs around 6-9 knots to be effective – won’t work.

Some of the bigger long-range charter boats are particularly well set up to enable this method, especially those with large cockpits and no outriggers, or which have a large, clear bow area with high rails for good support.

It is also possible to do it from smaller craft, but you may need to clear one side (starboard if you’re right handed), perhaps taking down the closer line from one outrigger and deploying it off one stern corner instead if necessary to create some room. Even so, with rods perhaps stored overhead and/or outriggers nearby, casters will need to be reasonably capable.

A two-metre-plus 8-10kg casting outfit can achieve the required distance, ideally with two or three metres of 15kg fluorocarbon trace tied to a slender, 40-70g, pink and white jig (the Blue Fox Herring range is perfect). Change any trebles to a single hook if possible, as it’s less likely to rip out.

Now cast out as far as possible, preferably at right angles, and crank back briskly, dropping the rod tip to keep the lure in the water and swimming naturally throughout, only slowing slightly if the lure starts being pulled along behind the boat, adding to your retrieval speed. By the same token though, you don’t want to catch the live-bait line, so whizz it back faster if that looks like happening.

I’ve had some truly wonderful experiences trolling skipjack baits and casting for more at the Three Kings aboard Pursuit, with Rick Pollock at the helm. Although we only had two tuna tubes, we were able to take advantage of steady bites from marlin and assorted sharks over extended periods, thanks to concentrated casting by three or four of us when necessary. And, to be perfectly honest, thanks to the sizzling runs and never-give-up attitude of the tuna we were hooking, I would have been quite happy just catching these amazing little fish.