Twenty Tips for Fishing with Sabikis Forty years ago the first sabiki bait flies appeared in New Zealand. Sam Mossman was an early adopter and his first seven-hook rig, dropped off the Pukenui Wharf, produced seven baitfish – of three different species! He has been sold on them ever since.

It came as quite a revelation in the 1980s when the first sabiki bait flies, packets covered in indecipherable Asian script, appeared on the scene. Sabikis consist of multiple small flies snooded onto droppers hanging off a main trace. The originals were simple gold hooks with a white tent-wing, a dab of red paint on the head and a small luminous plastic bead on the branch line above the hook.

They proved deadly. The fine wire hooks are set easily, the flies are a fair representation of a group of larval fish and as a group seemed more visible and attractive to fish. The addition of a small luminous bead to the mix seems to make them irresistible, especially in low-light conditions, or after dark.

The original Asian sabikis were designed with end target species in mind (often illustrated on the packaging) like jack mackerel or granddaddy hapuku – or at least their Asian cousins. In this country sabikis revolutionised the catching of small baitfish, both for live and dead baits (whole or cut). These, in turn, are used to catch larger ‘target species’, like kingfish, snapper, john dory, etc. John dory are highly susceptible to livebaits. The tail of the sabiki-caught jack mackerel this one took is only just visible in its mouth.

My very first sabiki string was soon pulled apart by larger fish than it was designed for, such as kahawai, snapper and trevally. Although good quality sabikis are reasonably tough, and I have managed to boat a couple of modest kingfish on them after long fights over a clean bottom, ‘hooking more than you bargained for’ was a common experience and led to the development of the out-sized sabiki strings we now call ‘flashers’ – but this is a topic for another time.

The first basic ‘white tent-wing style’, although highly successful, was the merest tip of the sabiki iceberg. A tackle company I worked for some years ago won the NZ agency for the Japanese tackle giant Hayabusa. The catalogue of their sabiki range was about 10mm thick! Cautiously, we added the ‘pink shrimp’ and iridescent green tent-wing (now called ‘midnight mackerel’) to the white tent wing. Although there are now a huge range of designs available, these three are the basic designs still popular today, and are available from a number of manufacturers.

With a range of sizes in these basic patterns, an angler is well prepared for most bait-catching situations from boat, beach or wharf.

Sabikis, especially those with luminous beads or paint, can be used effectively during the day or after dark. Sometimes jack or slimy mackerel (common catches with these rigs, although yellow-eyed mullet, piper and pilchards – amongst other species – can be hooked) are more easily caught in low-light conditions, early or late in the day.

It’s fascinating to go down to a wharf with a strong light on at night to check out the ecosystem which has developed there, especially on a full tide. Krill, larval fish and other small sea creatures cluster in the light. Small predatory fish, such as jack mackerel and piper (garfish), feed back and forth through this zooplankton. Sometimes medium predators such as kahawai, kingfish or barracouta take their toll of these small fish. Squid hover around the fringes, and at some deeper and more isolated northern and Bay of Plenty anchorages, flying fish may cruise the outskirts of the light, occasionally becoming mesmerised by the glare. Other species are deeper down, out of sight. Jack mackerel are great baits, alive or dead, and easily caught on sabikis.

The effectiveness of sabikis makes them ideal for kids to use. They produce a lot of action, and this is what is needed to keep kids interested. As well as keeping the little ones entertained, sabiki fishing can keep the live-bait tank filled, the bait freezer topped up and the cat fed. It is a great way to introduce kids to fishing – there is no better grounding for fishing skills than that experienced by ‘wharf rats’.

There are some fine points that will often increase the success rate of fishing sabikis:

1: Use light line (4kg is good) and a long (1.8-2.1m) soft-action rod. The soft action will help prevent the hooks pulling from soft-lipped fish like mackerel when being lifted from the water; this is especially important when using braided lines, as they have little shock-absorbing stretch.

2: Hang them the right way up. Attach the sabikis to your line so that they flare out away from the main trace and do not lay close in along it. This helps avoid tangles and presents the flies more attractively.

3: Use a reasonable sinker weight so the sabikis go down efficiently, and to minimise tangles. Fishing sabikis without weights will catch fish but can result in terrible tangles.

4: Work the whole water column until you find the level the fish are feeding at. When free-spooling the flies down, catch the line with a finger about every metre and give it a couple of twitches with the rod, before letting it sink again. Do the same on the retrieve – wind a little line, pause and jig, wind a little more etc., until you locate the fish.

5: Don’t over-jig the flies; use little sideways twitches. Remember the small prey items they imitate do not move around like rockets.

6: If you can’t feel the weight of the sinker, wind quickly – you probably have a fish that has run towards you.

7: Pull fish in promptly; don’t wait for the string to fully ‘load up’, as this can also result in tangles. Better a fish in the tank than ten minutes wasted untangling the sabiki.

8: Small slivers of bait on each fly will usually result in more fish but keep the baits tiny. If fished on the bottom, baited sabiki flies may result in undesirable catches like juvenile snapper. If this happens, do not let the sabikis linger near the bottom; remove the baits, or relocate.

9: I have had success using tiny bits of GULP! shaved off damaged soft-bait tails and added to the sabiki hooks. It is important to keep the piece small, so it doesn’t choke the hook or make the size of the fly-bait combination so large that it is unattractive to the baitfish.

10: In some areas where the baitfish have been hit hard for decades, they can be hard to catch. Try a different pattern or size (usually smaller) of sabiki.

11: If the predominant feed is larval fish, use white ‘tent wing’ types; if they are on krill, use ‘pink shrimps’. If you are unsure, a little trial and error is in order.

12: Surface berley is a useful way of attracting baitfish, encouraging them into feeding and keeping them in the area. This may be done at night or during daylight hours under a boat or wharf. Some Asian sabiki rigs feature small berley cages at the end. 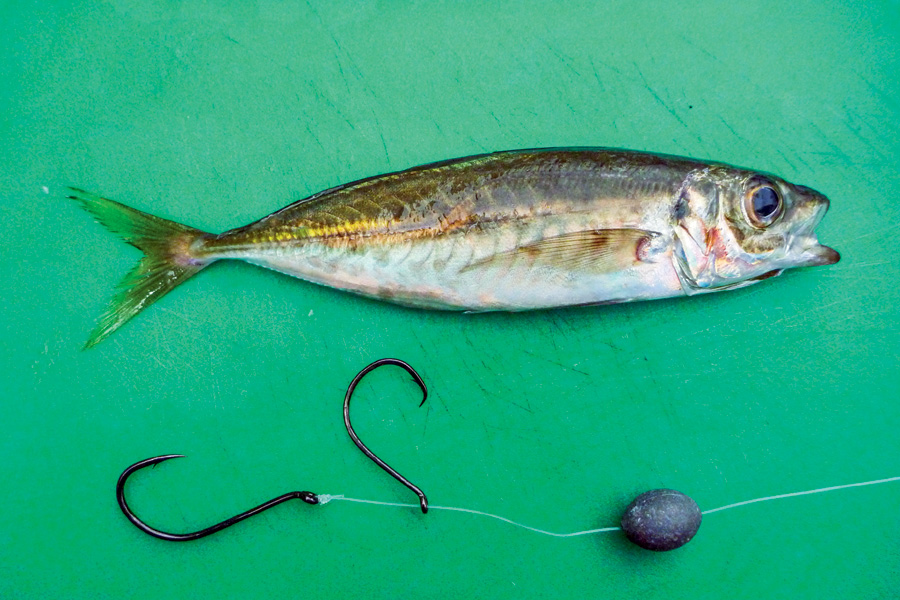 13: Berley bombs deployed near the bottom, as when bait fishing for snapper from an anchored boat, often attract plenty of mackerel. These can be tapped for fresh livebaits or cut baits, but don’t be surprised to catch other species on your sabiki, too.

14: Results are often better when there are more flies on the string – six to eight is good; any more becomes hard to handle.

15: When fishing after dark, charging up the luminous beads regularly under a light with a camera flash or a UV torch (such as those from Black Magic) can greatly improve results. When using sabikis at night, charge up the lumo beads with a torch or other light.

16: When using flood or bait-lights to attract baitfish after dark, don’t always fish the sabiki right in the middle of the light – try the fringes if you are not getting results.

17: When bringing sabiki-caught fish into a boat or onto a wharf, control the string of flies and wriggling fish by grabbing the sinker, not the top of the string. Taking the cushioning effect of the rod out of the equation often means the hooks will tear out of the fish before you are ready. The baits may fall back in the water or hit the deck and be injured or killed – bad news if they are intended for livebaits.

18: If unhooking fish meant for livebaits, try to avoid handling them, as this can reduce their chances of survival. Hang them above the livebait tank and either try and grab the fly only, rolling it out of the fish’s mouth, or slip the back of an old butter knife (or a wire hook) along the branch line into the bend of the hook. If using a butter knife, pin the hook shank to the flat of the knife blade with a thumb, then turn the fly point down by rolling the knife. A couple of shakes should see the weight of the fish pull it free, and it will fall into the tank without being touched.

19: Charter boats (who use a lot of baits) use heavier sinkers than usual (2 or 3oz) on 4 or 6kg line and appropriate tackle. The boat runs slowly over the bait grounds until it locates a school of bait on the sounder, then stops quickly with a squirt of reverse throttle. The anglers then drop their sabikis instantly and get them down quickly to the depth the skipper calls. While not always successful, this technique can be a good way of locating and catching bait quickly without the need for berley.

20: If you want to re-use sabikis, be sure to wash them in fresh water, then let them dry before rolling them up on their holders. This prevents hook corrosion and breakage in later use.