Josh Darby suggests we are extraordinarily lucky in New Zealand to have an array of excellent fish species to target. The New Zealand trevally is one of them, and for Josh, it deserves more attention from Kiwi anglers than it currently receives.

These wonderful creatures tend to be overshadowed by their much sought-after sea neighbours, snapper and kingfish, and yet it’s completely reasonable to wonder why this is the case. Why would one turn their nose up at a fish that can provide a real challenge to an angler’s ability and are also a superb culinary delight? Well, working on the hypothesis that the focus on snapper and kingfish has less to do with not wanting to catch trevally and more to do with not knowing where or how to catch them, this article will provide an array of tips and tricks for targeting trevally on lures. 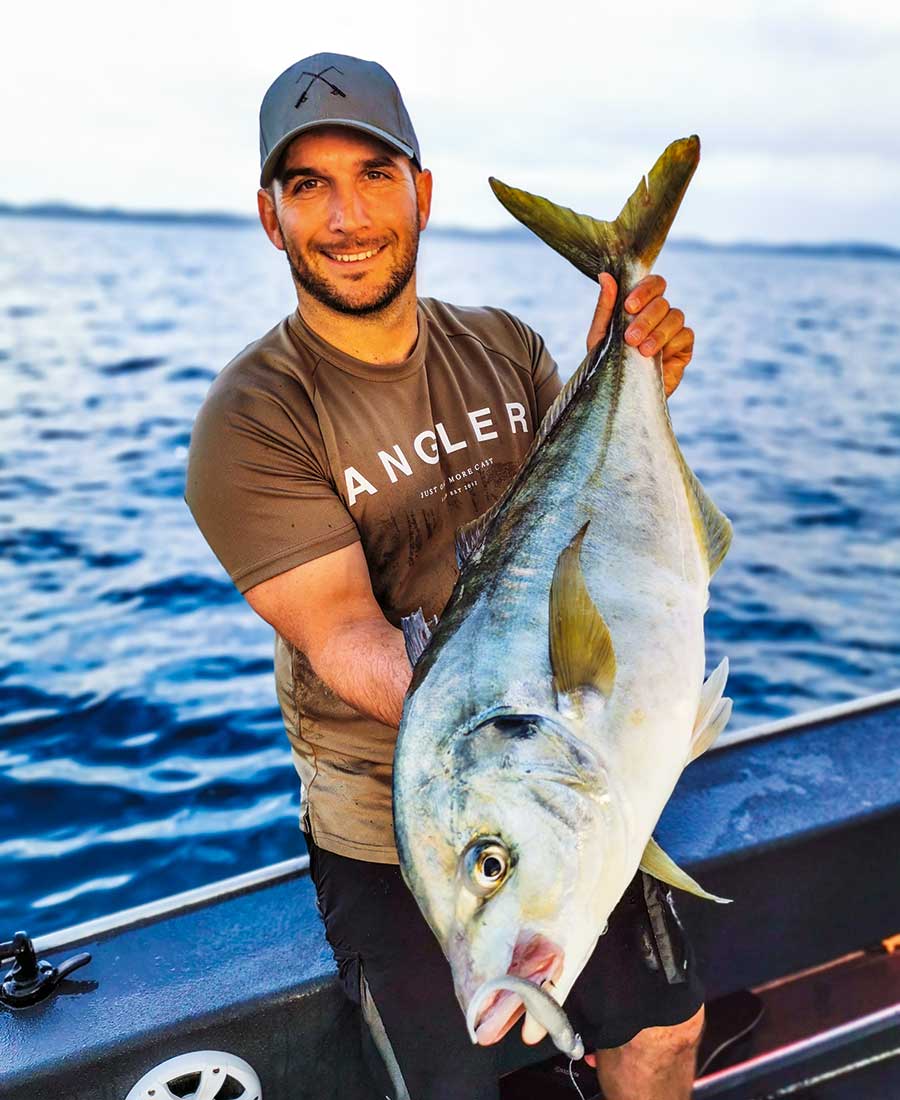 The author with a photo of his NZ record (length) trevally caught while soft-baiting around tern workups in the Far North.

How big and where?

Our trevally tend to average between 1-3kg and 30-50cm in size. However, some have been caught in excess of 9kg and 80cm in New Zealand! It is important to know that they have a minimum size limit of 25cm (especially if you plan to livebait them for big kingfish!) and are included as a part of your finfish combined daily bag limit.

Trevally can be caught around the North Island and upper parts of the South Island year-round. They are mostly an inshore species with juvenile fish often found in estuaries and bays while adult fish tend to hang around areas of low-lying foul, coastal headlands and inshore reefs. I have caught trevally year-round but tend to catch them most often during summer and autumn.

I will quite often encounter trevally in the areas I fish regularly – Auckland, Tutukaka and the Far North – but come across them most frequently in the Far North, which is also where they tend to be the biggest! While trevally can be found individually, they are also often located in large surface schools, sometimes mixed in with kahawai, where they feed on plankton and krill. Coming across a large school of trevally feeding on the surface can be quite the spectacle. The combination of their backs sitting upright out of the water and their feeding froths up the water and provides an obvious casting target. 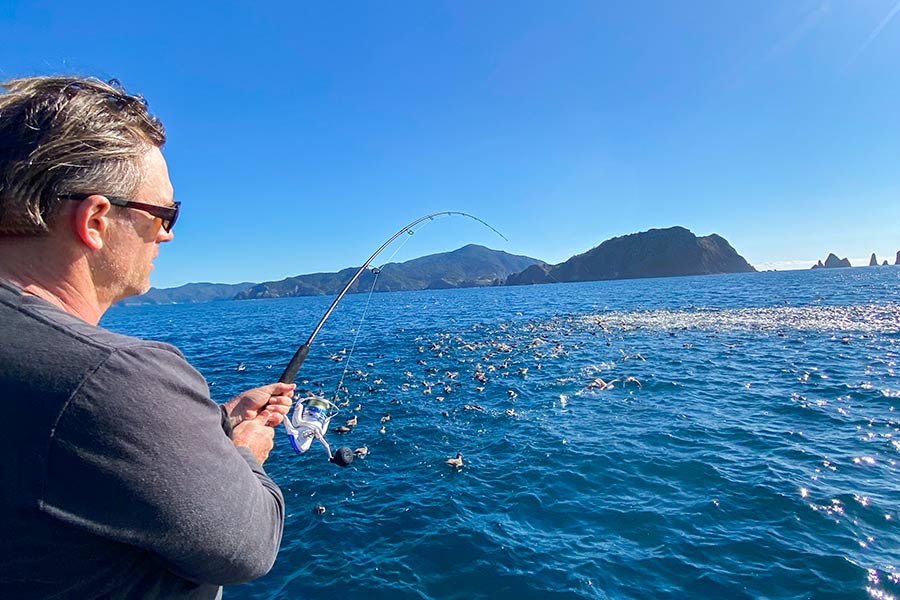 Trevally often boil up on the surface with their backs out of the water.

While trevally can be successfully targeted using bait, this article focuses on using lures to entice them. The good news is that you can target trevally on the same soft-baiting gear you would use to target snapper. Lightweight soft-bait or micro jig rods provide a suitably sensitive rod-tip that can absorb the fast beat of a trevally’s tail. Additionally, a strong butt section will allow you enough power to gain control of any larger specimens you may encounter. The same goes with your reel, with a 2000-3000 size soft-bait reel being more than sufficient to do the job. However, it is important that the drag is not set too tight (less than I would use for snapper fishing – under 2kg) and is silky smooth – I will discuss why in the ‘angling tactics’ section below.

Keeping in mind trevally tend to hunt smaller prey, I attempt to match the hatch by using smaller lures when targeting them. This includes the use of 4”, or smaller, curly tail, jerk shad, or paddletail soft-baits, often in baitfish colours (green/brown, silver/black, green/red and white/silver etc). Though, I have been most successful targeting trevally on the ‘Flea’, a small tungsten micro-jig (14g-28g). This is likely due to micro-jigs’ much smaller profile, which allows the angler to match the hatch more accurately. 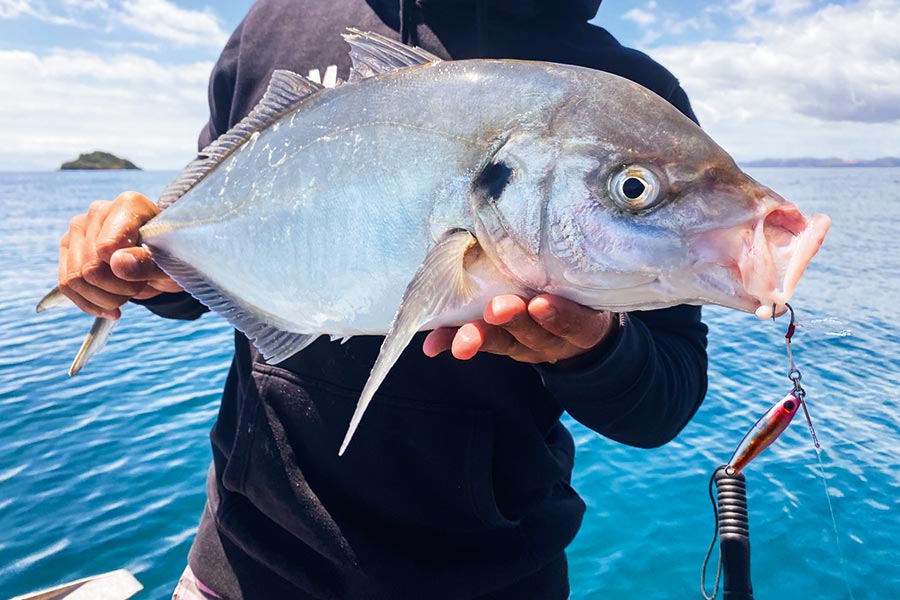 The 'Flea' micro jig is the authors most successful lure for targeting trevally (beware of the soft mouths, as demonstrated in this photo).

I most often target trevally in two scenarios. The first is among the anchovy schools which tend to congregate in autumn in the Hauraki (though they arrived early this year). The arrival of these schools of smaller baitfish (whitebait being another) trigger workups that can also be found off beaches and in bays in relatively shallow waters (1-30m). Just look for terns and shearwaters working the baitfish. Upon locating these workups, I will usually switch to a smaller profile bait, either a 4” jerk shad/curly tail soft-bait or a Flea. If using a soft-bait, I will cast it out around the bait schools in much the same way I would when targeting snapper. However, I tend to fish the soft-bait differently for trevally, working it higher in the water column while also imparting more movement and speed to the lure. Alternatively, a micro-jig, can be dropped straight down if in deeper water, or cast out in the shallows. Again, I will work the entire water column, balancing movement of the lure with moments of rest to both attract a bite and allow for the hook-up. The same tactics can be used in the other scenario I target trevally, which is in deeper water over low-lying reef structures where I have encountered surface schooling trevally before. The same tactics I use for workup fishing can be applied here; however, the reef below offers up the further challenges of not fouling up your expensive jigs or allowing a decent trevally to bust you off.

You will likely know if you have been successful in hooking a trevally as they have quite a distinctive fight. Upon hooking a trevally, you will often sense the fast tail beats that reverberate up the line and feel very different from the snapper nods many people are accustomed to. They also tend to circle and move around much more than a snapper would throughout the fight. One important factor to keep in mind when fighting these fish is the softness of the trevally’s mouth; the combination of these soft mouths, a jig head, and too much pressure exerted through the rod and/or a drag that is too tight is liable to end in tears. Consequently, there is a balance to be struck in ensuring enough pressure is maintained so the hook cannot come out of a largening hook hole, but not so much pressure that the hook is torn right through the trevally’s mouth. This can be achieved by running a light drag while being patient in bringing the fish to the boat. Whatever you do, don’t attempt to lift a trevally into your boat via the leader or jighead, as this will almost certainly end in the hook tearing through the mouth and the fish making a timely escape.

I have enjoyed the firm, tasty, white flesh of trevally as sashimi, in raw fish dishes, curried, fried and smoked. It is a versatile protein; however, like any fish, maximising its culinary potential comes down, in part, to how you dispatch and look after it. We will iki and bleed our trevally before packing it down in a salt-ice slurry. They can be filleted much like a snapper, though skinning them can prove a little more challenging. Trevally make for great eating, with some preferring the texture and taste over snapper!

So, there you have it, some tips and tricks for catching the humble New Zealand trevally on lures. Don’t be afraid to go out there and give targeting trevally a go. I am confident you will enjoy giving the snapper and kingfish a break to experience the pleasure of targeting, catching and cooking a different species of fish. 2 fish at once my best catch to date - kaka point

Just a though, cooling the fish down qu...
Caption This