With an abundance of fishing opportunities right on Auckland’s doorstep, it’s no wonder topwater fishing has seen a spike in popularity in recent years. However, with the Gulf’s seemingly endless coastline, choosing where to start casting can be difficult, but thankfully there are hotspots that on their day can produce world-class fishing only minutes from the ramp.

As is often the case, finding the fish can be one of the biggest challenges we fishos face. Making sure you are looking in the right places is essential for converting casts into fish. There are always certain aspects to consider when on the hunt, no matter which form of fishing: current, structure and baitfish – or a combination of the three – are always worth prospecting. 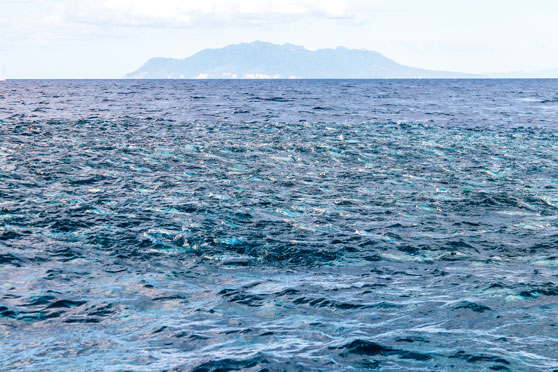 Finding such areas is all part of the fun. Landing a solid fish from a piece of water that is new to you just adds to the buzz. Over time you will start to identify likely looking stretches of coast by the conditions surrounding them.

When exploring new territory, we quite often throw two different types of topwater lures. One person casts a large hookless popper and one casts a stick-bait. The purpose of the popper is not to catch the fish, but instead to attract fish with noise and splash so that you can present a less intimidating bait to them and anticipate the bite. Time and time again I’ve seen large kingfish raised by a popper, only to turn around and violently crash the stick-bait.

Making sure you are fishing at the best possible time is paramount when testing new waters; figuring out when certain stretches of coast produce fish could be as simple as being the first one there – or the last to leave. You could throw lures all day without raising a single fish, only to have the fishing turn redhot an hour before dark.

If a spot looks good, chances are it is. You just need to figure out the equation. Fish dawn and dusk, or with the moon directly overhead or directly underfoot. These are considered the best ‘bite times’ and they are a good place to start when working out how to fish new areas.

Consider the tide when figuring out areas of interest and when they should be fished. The current that rips over reef systems like Ti Point or Leigh Reef, dictates where you should start casting as baitfish will mostly sit on the up-current side of structure. They do this for two main reasons: they can sit with their tails to the reef, safe from attacks from behind, facing into the current which brings food straight to their mouths. This rule is applicable even on offshore reefs and should be used as a general guideline with any kind of structure. It is where you find the kingfish.

When fishing offshore reefs or pins where the water is deeper, you want to put all your effort into casting around over the slack water. Once the tide stops running, the bait fish that have been sitting on the up-current side of the rock have to migrate to the opposite side to once again find safety and food. Kingfish use this transition period to their advantage, pushing the bait upwards in the water column, often all the way to the surface. They do this because the water’s surface effectively cuts off half of the escape route making bait fish much easier to catch. 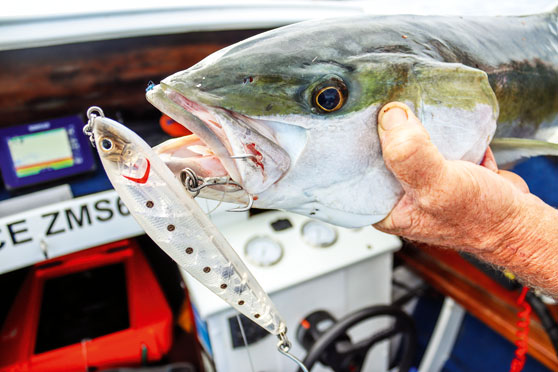 Places like the Aldermen pins or the Cavalli Islands have wellrecognised topwater fishing locations for exactly this reason. I have applied the same theories to fish the King Bank with great success. Our stick-baits were getting crunched almost every cast, there were bait fish flying out of the water on all sides and kingfish crashing everywhere we looked. Gannets were getting in amongst the action too, and the hardest part was deciding where to throw our lures!

Fishing these offshore locations gives you a much higher chance of running into trophy fish while a large percentage of the fish caught inside the Hauraki Gulf will be around 6-10kg, with larger fish making an appearance every now and then.

This opens up a world of opportunities for new anglers as high-end gear is not a necessity. The reality is that just about any reel capable of exerting 10kg of drag is sufficient and most brands have a great selection of entry/ mid-range spinning reels that are perfect for Auckland’s fishery.

A normal topwater rod will be around 8 feet (2.44m) long with a soft tip for working lures. The average run-of-the-mill stick-bait will set you back roughly $40 and is a good place to start. Stick-baits can be very expensive, so it pays to start cheap while you’re getting used to your gear. Using high-end split rings and swivels can save you fish that otherwise would have bent out or snapped low-quality connections.

For the beginner, the easiest way to work your lure is with a long sweep of your rod, before winding up the slack. Watch your lure when doing this to ensure you are making it swim right. Too fast and you will pull it onto its side, too slow and the lure won’t dive.

Most stick-baits have an ‘S’ action to them, meaning they swim left to right before returning to the surface. You can easily tell if the stick bait is swimming properly by watching for the ‘pop’. Because almost all stick-baits float at 45° on the surface, watch on the pause for the lure’s head to come up out of the water before starting the next sweep.

The Hauraki Gulf has its fair share of well-known topwater fishing locations and of the lot, the Leigh coast is probably the most popular. This coastline is perfect for new fishos wanting to have a crack at landing their first kingfish on top. Although it is only an hour out of Auckland, it still holds a reputation for producing big fish for boaties and kayak fishermen alike.

Even though the entire expanse of coast holds very promising territory, you can break the area down into two main areas of interest. Ti Point is the first piece of structure out from the Whangateau Harbour, and even with its close proximity to the boat ramp, should not be overlooked. This is an early morning fishing spot, and while you can still catch fish there on top during the day, the most reliable bite happens in the first hour of light.

The reef extends south-east of the point, dropping from 12 metres at the top down to 20 metres. It is a very reliable jack mackerel spot used by many recreational fishos heading wide for the day.

Use your electronics to find the bait schools and cast around them. It is not a very big area, so the kingfish won’t be far away. You will quickly know if they are there or not. To cover the whole reef should only take 20 minutes or so.

Moving from here, I often run out to Leigh Reef, the second stop on this coast. A large underwater ridge extends south-east for almost a kilometre, so there is plenty of potentially fishy ground to cover.

The strong tide that pushes in through the Jellicoe Channel creates big upwellings over the reef. This sends plankton and krill to the surface throughout the area, meaning you often get big schools of kahawai and trevally feeding on the surface. This gives you the option to either target your fish around these feeding schools or to concentrate your effort on the reef’s high points. There are four 13m high points scattered along the reef’s backbone. This is a big area, but an abundance of crayfish buoys often mark the high spots, so use these as reference points if you do not have electronics on your boat or kayak. It’s not uncommon to see kingfish hanging around the ropes.

Casting large stick-baits is a good idea at any location inside the gulf to avoid the high numbers of smaller fish. You will find that on some days kahawai can be a nuisance, especially when you know kingfish are around, so don’t be afraid to cast 200mm lures as even an undersized fish will quite happily take on large baits.

Flat Rock off the back off Kawau Island is another well-known topwater spot that often produces good action. All the reefs around the rock hold kingfish but also plenty of sharks. If they show up, stop fishing. 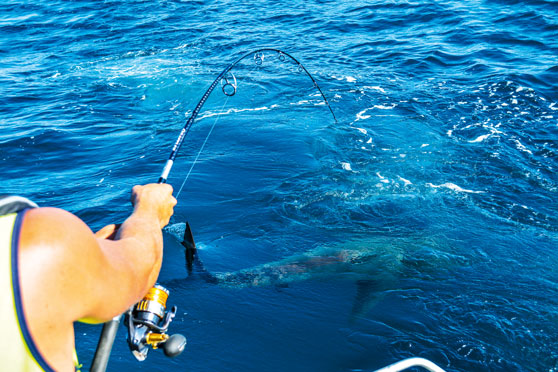 Targeting the reef systems off the south-east side normally yields the best results, but it can take a while to search the area as the fish could be anywhere.

With the prevailing winds for the next few months mostly out of the western quarter, the areas described above are relatively sheltered and should provide some excellent late autumn/early winter topwater opportunities. 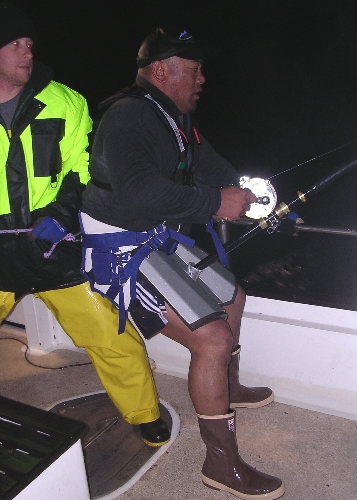