If you’re wanting to take a shot at catching a sea-run salmon, March is going to provide your best opportunity, writes Peter Langlad.

Not only will there be an accumulation of fish through the river system, but changes over recent decades have seen salmon runs occurring later in many rivers (e.g. the Waitaki, Rakaia and Rangitata). Also, fishing regulations mean that some options for chasing salmon will not be available by April because the salmon season for many fisheries closes on the 31 Match (e.g. Waitaki River and West Coast Lakes).

March also sees cooling temperatures that get the salmon responsive and snappy. Here are some pointers to help you catch the elusive chinook salmon. 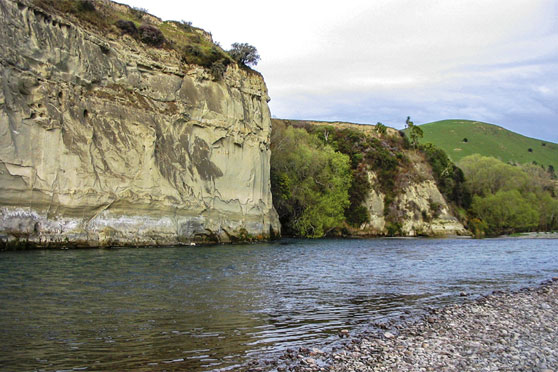 March is a good time to check out the middle reaches of the rivers.

This season has been a little more challenging than usual with quite low fish numbers so far, but March often sees peak salmon runs for many rivers, especially the Waimakariri. There is no other experience as exciting in freshwater fishing as landing a sea-run chinook salmon. I can remember every fish I have caught in the last 30 years.

It pays to share information with other anglers, perhaps through riverside conversation, or through a social media group, and also tune into fishing reports either from Fish and Game or the local tackle store. Realistically, the salmon run is a small number of fish in a large area. 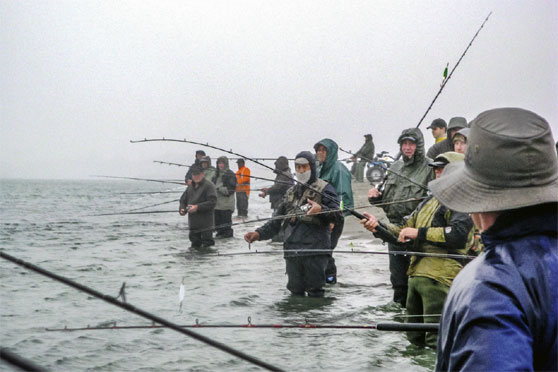 Taking the time to talk to other anglers is important. Rivermouths offer a social setting.

The entire wild salmon biomass is probably only in the tens of tonnes of fish, so fishing where the fish are is often the main challenge with salmon fishing! Being flexible with locations, quick to adapt techniques and also being prepared to travel are keys to success.

Sharing travel costs with a mate or two, as well as information, makes the game a lot easier. You need to make catching salmon a mission, and when you are in a good spot, you have to put the hours in. There is a saying that to catch salmon, you need to become part of the landscape!

Secondly, it is critically important that your gear is in top shape. Salmon are powerful fish so regularly checking your knots is essential – especially when fishing up-river. Salmon often take very lightly, so fishing with braid will certainly enhance your fishing success. Braid is also a lot thinner than nylon for the breaking strain and will give your gear a good sink rate, as salmon sit in and travel through the deepest part of the river.

I use thin, but strong, treble hooks with needle-sharp points. Salmon are not feeding in the rivers, so they will often just tap the lure. Having ultra-sharp hooks is critically important. The reality is that many people are lucky even to get a single strike per trip, so you want to capitalise on any opportunities. 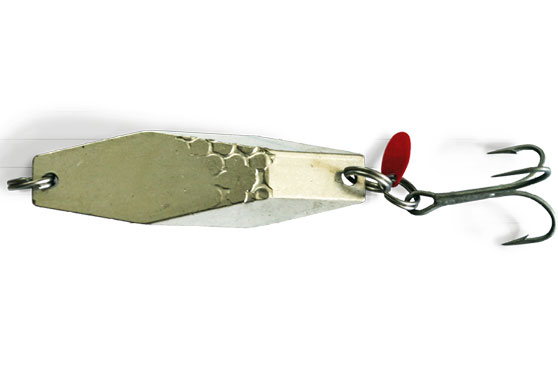 Often anglers will only get one strike a day, so having sharp hooks is critical.

Sensitive rods also aid strike detection. Adding different coloured reflective tape to lures can also help. Fluoro-green is undoubtedly a trigger colour for salmon and is highly visible in milky water. By March I’m ready to find some upriver pools – it is a month that offers lots of opportunities to get away from the crowds and chase the salmon through the deep pools where they will hold in the mid-reaches. By then salmon are widespread through the entire river system and up-river fishing is a fun option.

Being first to cover the water in the morning is important and overall the period from 8am to 10am is when salmon are most likely to hit lures in the rivers. The same can also apply at river mouths, especially in the gut. Taking the time to cover the water at first light is often a good strategy.

Each salmon caught makes a lifetime of memories

Another good strategy is timing fishing trips to coincide with the first day or two after the river clears from a fresh. This is prime time, and fishing can often be good throughout the day right through the river.

For up-river fishing, keeping the gear close to the bottom is critical, and the simple silver Colorado spoon is a highly effective lure, and relatively cheap too. You will often lose a lot of gear when fishing upriver.

River fishing is often best when the air temperature suddenly drops with a southerly wind and overcast days can also produce good fishing. For fishing the surf, a north-westerly wind is hard to beat. March offers a variety of environments in which to chase salmon. While fishing the mid-reaches of the rivers is a favourite of mine, there are many other options.

The Otago Harbour salmon fishery often peaks in March, and it has been producing a steady number of fish this season. Also in recent years, rivermouth salmon fisheries have developed in some of Southland’s larger rivers, notably the Oreti.

Another fishery which has seen a notable increase in the number of salmon caught this season is the Wairau River in Marlborough. Not only have more fish been caught than in previous years, but the fish are of a larger size and in better condition, too.

Some of the remoter rivers have fished well this year as well, with the Clarence River mouth, north of Kaikoura, worth checking out when the surf conditions are right. March is also the best time to chase salmon on the larger West Coast lakes such as Mapourika, Paringa and Moeraki. By April, the West Coast Lake fisheries are closed.

In recent years the Waitaki Rivermouth has had good salmon fishing during the last week of March, and it’s certainly a bit of a tease as the river closes to salmon fishing on April 1. The Waitaki is a striking example of how the seasons have changed in recent decades.

March is traditionally the month that the Waimakariri River fires, but it is a wild card and often fires at short notice – fingers crossed!

Gather some up-to-date fishing intel, get together with a mate or two and put some time aside in March to chase salmon. For many, it is the challenge of the fishery and the anticipation that is the most exciting part. For many regular anglers, it is not a numbers game – they are happy with one sea-run salmon per season. Certainly catching salmon is a memorable experience and a challenge well worth undertaking.

While there are still some opportunities in April to chase salmon, March is the peak time. Overall the salmon fishery is in decline, so make the most of each season. 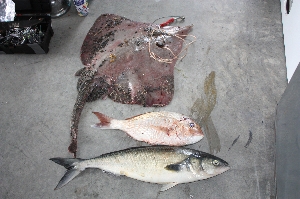