The Three 'T's of Deep Spinning for Trout

For Peter Langlands, one of the most exciting freshwater options on the mainland is heading into the Mackenzie Country and chasing ‘silver bullets’ – large and very well-conditioned rainbow trout.

A series of hydro canals run from Lake Tekapo down to Lake Benmore, offering over 60 kilometres of water to fish. The landscape in which the canals sit is nothing less than stunning, with Mount Cook and other alps in the background. In between is an expansive open tussock landscape.

The canals have six different salmon farms and the fish food fall-through fuels the rainbow trout’s phenomenal growth rate. Fish from 5-10kg are commonplace, with larger specimens up to 15kg being taken regularly. In winter, the rainbows are in prime condition and the cooler water really triggers the rainbows to become more active. The rainbow trout have an amazing flavour and put on stunning condition.

From a fishing point of view, I love catching the plump, often well-proportioned rainbows, especially maiden (non-spawning) fish which not only provide the best fights but are also the best eating. Over the cooler winter months there is more power demand, resulting in more flow in the canals and more rainbow trout feeding activity. In this article, I will focus on spin-fishing tactics to catch these stunning rainbows in the canal’s glacial fed waters.

The canals have a mix of rainbows, browns and escaped salmon, but it is the rainbows I like to target over the winter, especially in July and August when many fish are in prime condition. A range of techniques work well in the canals, including soft-baiting, spin fishing, egg rolling and even drifting baits under floats. My favourite method is deep spinning.

Using very fine braid will assist with a rapid sink rate and allow you to keep in contact with the lure in the big volumes of water the Mackenzie Canals have. I will typically use braid of 2.5kg and a three-metre nylon leader, the stretch of which gives some shock absorption when larger trout take the lure.

My preferred lures are small, heavy metal spinners with fast sink rates. I like hex-wobbler (‘ticer’) type spinners, or small but heavy spoons. Dark or black-colours show up well in the glacial water, but I have found that bright pink colours attract the most takes over the winter. Shocking pink is certainly a colour that the large rainbows react to aggressively and fluoro green strips added to hex wobblers also work well. Like all forms of fishing, experimenting with a range of colours is the key to increasing success. 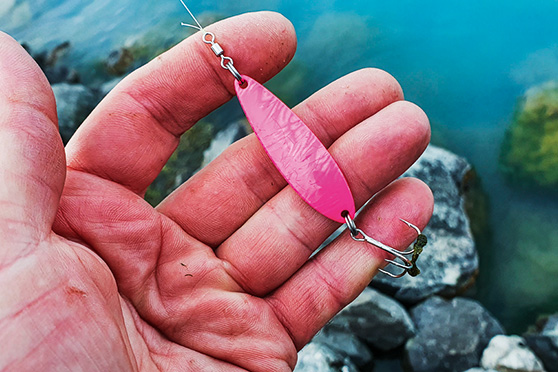 Use colours that stand out well in the glacial water.

Using chemically-sharpened hooks is also important when fishing the canals as the trout, which are very well feed, will often take gently and ‘sticky’ sharp hooks can produce a hook up from a casual enquiry.

One of the key factors to consider is that the large rainbows will often hug close to the bottom of the canals, especially in deeper areas where water pools, such as the ‘Fish Bowl’ at the end of the Tekapo Canal, just above Lake Pukaki. Given the canals are generally 8-12 metres deep in the centre, allowing the spinner to sink down in the water and be retrieved close to the bottom is critical. The same also applies to soft-baiting techniques.

Using a ‘countdown’ sink method to get your lure into the strike zone is effective. Allow the gear to sink for 10-15 seconds, then halfway through the retrieve, let the gear sink a second time for maybe 5-10 seconds to allow the gear to drop back down into the strike zone. A deep and slow retrieve often works well. Cast ‘up and across’ and retrieve the spinner back at about the speed of the current to prevent the retrieve lifting the lure in the water column.

Often the large rainbows will have soft mouths, so keeping a firm and steady pressure on the fish is important. Longer rods with sensitive and flexible tip sections are best to absorb any powerful head shaking.

Once hooked up, take time to play the fish and do not rush. With the light tackle used, and often large fish, you may need to quickly adjust the drag after hooking up. Be prepared to loosen it off immediately after hooking a large rainbow. Thumb the spool, if required, to control the fish if it decides to do a powerful run.

Playing the fish out wide in the current before bringing them in close is a good tactic to tire out the powerful rainbows which often put up super-charged fights.

A key piece of gear for fishing the Mackenzie canals is a wide opening, long-handled net. Take your time and make your first shot at netting these giant trout count. If the trout’s head hits the stones, the lure can easily fall out. Long-handled and wide-mouthed landing nets are best to secure the catch.

Large rainbows can be encountered throughout the entire canal system and while they are concentrated around the salmon farms, it also pays to cover the water between the farms. Fish densities will be a lot lower in these sections, but the fish will be more naïve. I often cover the water between salmon farms by walking ten metres between casts, and can cover several kilometres of water over a fishing session.

As the massive rainbows are generally very well fed, they often will not chase lures, so it is very much a case of dragging the lure over the trout’s nose. The fishing in the canals can be hit and miss, but if you put the time in and cover the water, you will be successful. I regularly only get one or two takes over a four-to-six-hour session, so the strike rate is not high. But when concentrating on the deep water in the centre of the canal, the fish you hook up will be good-sized, often in the 5-15kg range.

So, take the time this winter to check out the Mackenzie Canals and experience, in spectacular scenery and cool air, the best winter fishing option that the mainland offers in this period. You should also take the time to talk to and watch other anglers. It is fun, social fishing at the canals and you will learn new skills, but at the end of the day, there is also plenty of space to spread out.

Head south and take up the challenge of super-charged glacial rainbows! It will only take one fish to create a memory that’ll last a lifetime.

Sam Mossman reviews a pair of custom Senator RH 780Ws. Both Senators are customised to suit the buyers' needs, and both exceeded expectation... more >

We review the Kuaotunu Boat Ramp, Coromandel – the gateway to the Mercury Islands and Cuvier Island.... more > 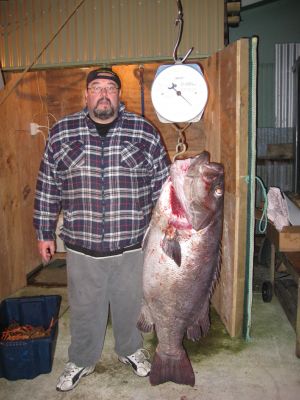