The importance of leader and trace when fishing

Mark Kitteridge discusses the importance of leaders and traces in various aspects of sport fishing.

I admit the idea of writing a feature on something as basic as leaders didn’t exactly get my creative juices flowing, yet this basic item of tackle plays a massive part in our fishing success.

The roles of leaders, also known as traces, in saltwater fishing are many and varied, but basically, they are incorporated to provide extra line strength and abrasion protection. Typically, they are made from nylon or fluorocarbon material. Nylon provides a relatively elastic option that ties up and handles well, while fluorocarbon is stiffer and harder to knot, but provides greater abrasion resistance. It is also harder to see underwater because it has a refractive index similar to that of water.

The following scenarios cover some of the more common trace material uses when fishing from the shore.

The leader plays two main roles for surfcasters. First, by adding a stronger length of nylon or fluorocarbon (called a shock leader), surfcasters can use a relatively thin mainline that cuts through the pounding surf and current, but still exert plenty of effort into casting without busting off the terminal tackle. 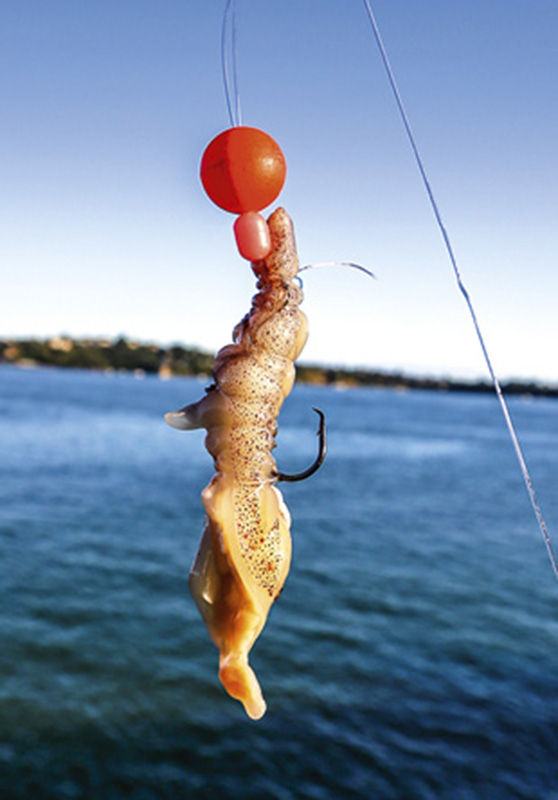 The shock leader, knotted to the mainline (often using an Albright or No-name knot with nylon, or the FG or PR knot with braid), runs the length of the rod plus a bit more to allow, after a couple of turns around the reel spool, half a metre or more to be hanging out of the tip-top guide past the rod tip. Depending on the angler’s strength, ability and aspiration, the shock leader can be anywhere between 30 and 60lb breaking strain (it’s possible to buy specialised surf-casting shock leaders that taper down to a thinner diameter for more streamlined knotting). This stronger length of line is also useful for anglers wanting to lift modest-sized fish up onto wharves or ledges without using a gaff. 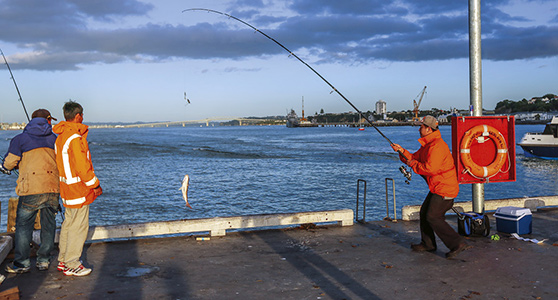 A four or five metre leader allows fish to be landed from elevated positions such as wharves and rocks without extra help.

Second, the terminal-tackle should be tied to thicker, tougher trace to prevent anglers being bitten or broken off. Common examples of surfcasting trace include a shortish length used in a running-sinker rig, or to make up a ledger rig incorporating a dropper loop or two.

The running-sinker rig provides added protection from crushing or abrasive teeth, while the ledger rig, thanks to the thicker line’s stiffer nature, helps the dropper(s) to stand out from the rig’s backbone. The extra strength – generally 50-60lb – also comes in handy when tying the Dropper Loop knot, as such knots have notoriously poor breaking strains. The thick line, even if it retains only 60% of its unknotted breaking strain, should still be much stronger than the main line. Most anglers deploy lightly weighted or unweighted stray-lined baits when fishing for snapper from the rocks, so there’s no need for a shock leader. However, due to the often unforgiving territory they fish and the crushing/abrasive teeth of the fish they commonly encounter, most fishers will use a stronger nylon/fluoro trace of varying lengths and breaking strains to guard against bite-offs and break-offs through abrasion damage.

When fishing baits for snapper, I keep my trace length to an absolute minimum – just long enough to half-hitch around a good-sized bait and not much more. This usually equates to around half a metre. That way the snapper only see my relatively thin 10kg nylon main line, a definite advantage in today’s hard-fished areas, especially when the water is reasonably clear.

For similar reasons, I also use traces of the lightest practical breaking strain (typically 50-60lb), especially as the circle hooks I use tend to hook fish in the mouth. This means the thicker diameter serves primarily to withstand the punishment dished out by the two or three half-hitches I use to secure the bait. It also provides a bit of protection from the snapper’s initial crunching bites and from the occasional big fish that rubs its mouth on rock in an effort to rid itself of the hook.

I know a lot of people who fish much longer and thicker traces in this situation, and they have some valid reasons for doing so. They believe the stronger trace will prevent them being bitten off by really big snapper and/or allow them to simply lift any reasonable snapper onto the rocks without using a gaff or net. I understand the last, but don’t know about the first.

I have NEVER lost a big snapper because it crunched through good quality, tough 50-60lb leader material, but I have come across heaps of people who swear black and blue that they have had whoppers smash through 80, 100 and even 130lb trace!

First up, I’m sure some of these ‘monster snapper’ were actually tope sharks, but I also believe a thicker trace material actually gives snapper something more substantial to chew on, whereas a thinner trace can slip between those powerful teeth – but this remains just a theory.

Or maybe it’s the extra pressure that’s being exerted when using 30lb (or more) line, the tautness of the line allowing snapper to inflict greater damage – a bit like cutting through cord with a blunt knife. 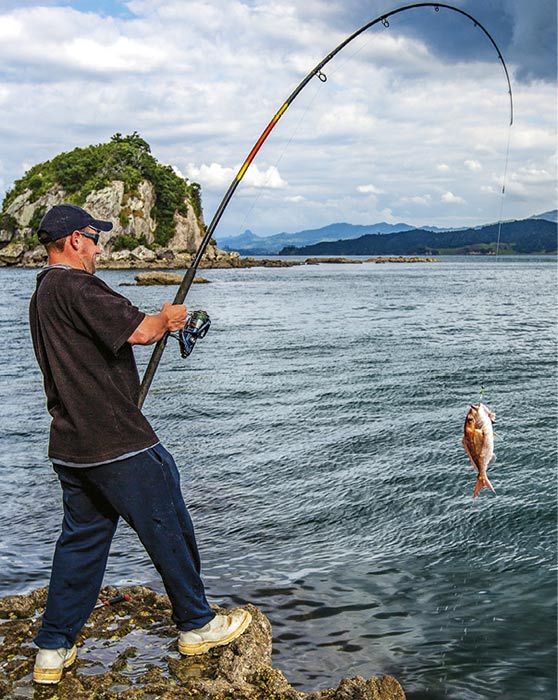 A snapper is safely lifted up onto the rocks thanks to the thick trace used.

Kingfish are notorious for running anglers’ gear into the nearest line-shredding foul, so using a leader of a decent length to add some much-needed insurance makes sense. I mostly fish five or six-metre leaders when targeting kingfish. When hooked up, I move around smartly to keep line angle to a minimum, assuming positions with good elevation where possible so the line is less likely to come into contact with structure and weed.Baits: in all cases the thickness of the leader is best determined by the size of bait attached. It seems to me that the larger the bait, the less significant the trace thickness becomes (picture a slender little piper trailing five metres of 100lb leader, then a three-kilo kahawai, and I think you’ll get what I mean).

It’s important to remember that the lighter the trace, the more active the live bait can be, and the longer it will survive. Typically, I use 50lb trace with piper and small mackerel, 60lb for medium yellowtail and small kahawai and 80–100lb for big mackerel and medium kahawai. The largest kahawai can handle 130–200lb trace, no problem.

Those fishers who like to attract kings with cubed pilchards should consider 60lb fluorocarbon when the time finally comes to drop back a ‘loaded’ one.

Lures: Although kings can be targeted with metal lures, most anglers use stickbaits and poppers. Again, the size of the lure largely determines the trace’s breaking strain. A small lure’s natural action tends to be dampened by a trace that’s too thick and, as in the piper scenario, a heavy trace can be more obvious to kingfish, deterring them from biting.

As with surfcasting, I like a trace that’s long enough to go around my spool a couple of times, be run up through my rod’s guides, and still hang half a metre off the rod tip. Mono is usually preferred over fluoro because the fluorocarbon can spring up off the spool at unfortunate times, and its extra stiffness can diminish lure action. 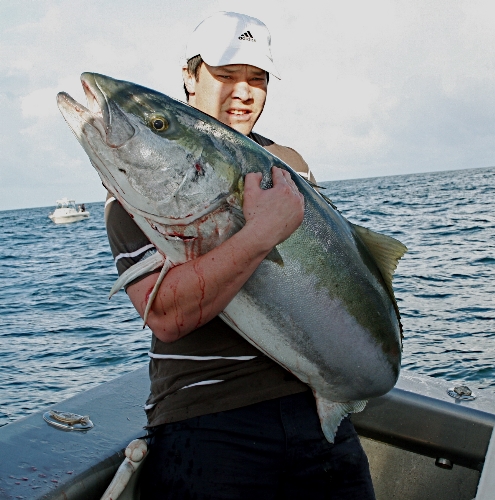