The last couple of seasons have seen a resurgence of tuna numbers, sending anglers scrambling out wide to get a taste of the action. Adam Clancey shares his top tips for tempting these tuna into a bite.

Of all the gamefish available to NZ anglers, yellowfin tuna would have to be close to top of the catch-list for many anglers. They are hard fighting and exciting to catch and will respond to many fishing techniques. Unfortunately, the last decade has seen a huge decline in yellowfin tuna numbers.

In its heyday, Whakatane was the hub of tuna fishing with massive schools entering the Bay of Plenty. Anglers enjoyed some prolific fishing with massive meatballs being hammered by schools of hungry tuna. Without being a scientist and with little but anecdotal evidence, it is still fair to say that the reason for the downfall in the tuna fishing in New Zealand lies further out in the Pacific. Large commercial fleets of fishing boats from around the world were granted access to the prolific tuna grounds around the South Pacific and these fish were picked off before they even got a chance for their annual migration to New Zealand. Fortunately, that fishing pressure has eased a little and we are starting to see an increase in the number of yellowfin tuna coming to our waters, to such an extent that it has become worthwhile to target these delicious hard fighting fish.

Yellowfin tuna usually turn up in New Zealand waters in late December when the offshore waters start reaching 19-20 degrees. These fish migrate down from the Pacific and are mainly found along the East Coast with a smattering turning up on the West Coast. The main area to look for yellowfin tuna is from North Cape to East Cape, although they do extend a little further south as well. You can find them in water as shallow as 90 metres, right out to a few thousand. Yellowfin tuna tend to follow the warm water and will only really hold in an area if there is a good amount of food available. This food can consist of squid, pilchards, anchovies, saury, flying fish and/or mackerel. Tuna will also feed on lesser known deepwater fish and smaller tuna as well.

Many tuna are bycatch for anglers searching for marlin but they can be targeted with different lure and technique selection. Trolling for yellowfin tuna is a very productive way to find the fish and if the tuna are very actively feeding, this will work well, although tuna of all sorts have a preference for smaller lures that match the food source. Tuna prefer lures that stay in the water and even run a few metres under the surface. Straight running bullet heads and jet heads work well, as do diving minnows. Running a basic tuna lure down around 10 metres on a down rigger is deadly and will often be the first lure to get hit. Tuna like speed when trolling, so 6-8 knots is a good pace to set the boat. 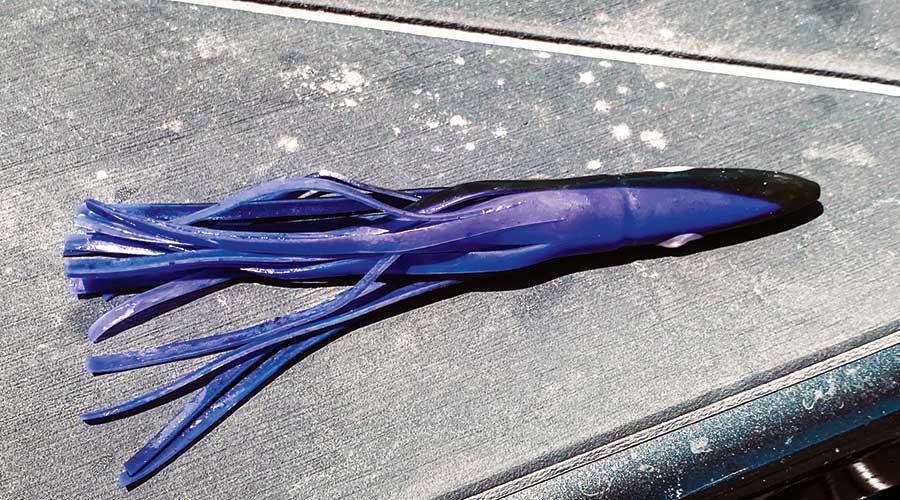 At times tuna will bust up when feeding, making them easy to target. If you get them in the right mood, they will happily take a popper or stickbait. It is quite important to make sure you have good hardware on any lures aimed at yellowfin tuna as they will find any weaknesses in your tackle. With today’s modern tackle, it is easy to put together an overhead or spin setup that can be used for a variety of techniques. Reels that can accommodate 500 metres of 24kg braided line are ideal.

When yellowfin tuna are not active on the surface, there are a couple of techniques that will work if you can locate some fish or are in a location where you know fish are holding. Deep jigging with knife jigs, butterfly jigs and micro jigs will work very well if the fish are hanging deep in 50-100 metres of water as they sometimes do. Tuna will school up deep around FAD’s (fish aggregation devices), so jigging around them is always worth a crack. Good marine electronics will vastly improve your chances when searching for yellowfin that are hanging deep. 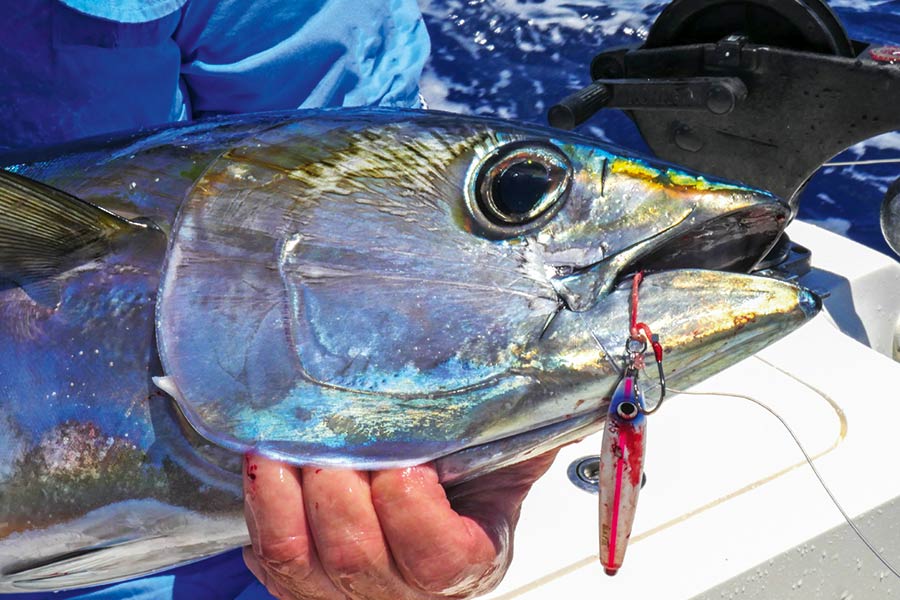 Fishing for yellowfin tuna can be frustrating at times as they can bust up all over the show and not really show any interest in lures. If conditions allow, setting up a berley trail and fishing livebaits or cubes of fresh pilchard or skipjack tuna can turn on a fish. With this technique, a constant solid trail of cubes, about two every 30 seconds, can attract yellowfin to your baits. Unfortunately, it will attract a few unwanted sharks occasionally. This can be a small price to pay as if the tuna turn on to your berley, multiple hook-ups can be common.

Fighting a yellowfin tuna is epic no matter what size. They will give a good account of themselves, usually starting with a few big runs followed by back breaking deep circles under the boat that will not end until the fish is boated. They should be handled with care beside the boat. Use heavy gloves if tracing a tuna and a sturdy gaff to land the fish. 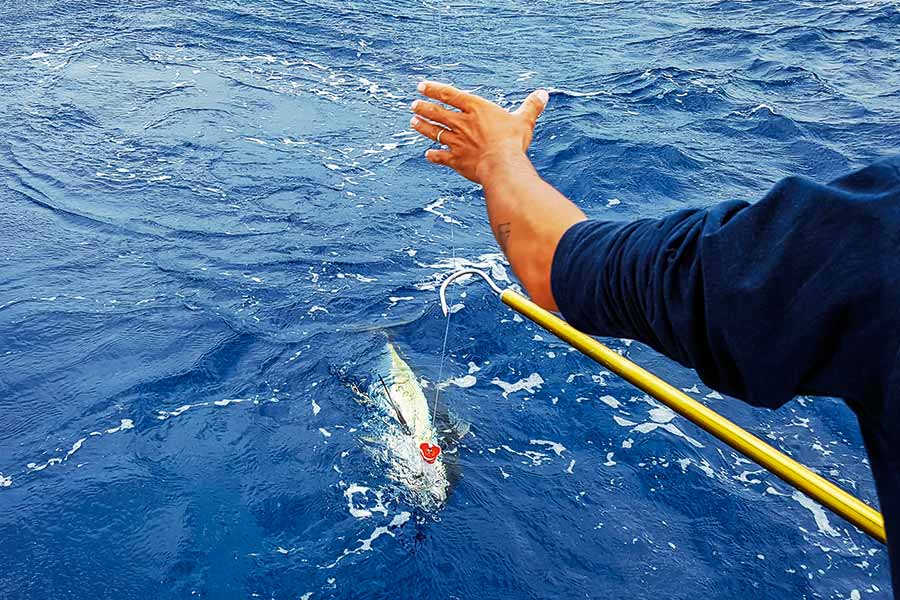 Take care when landing a yellowfin as they are very powerful.

Once in the boat, kill your yellowfin quickly and bleed it by cutting it across the gills. Once killed, wash off any excess blood and place in a large chilly bin packed with lots of salt ice to protect the flesh. Yellowfin tuna make for beautiful eating and can be enjoyed smoked, raw Japanese style, Pacific style with coconut cream or lightly seared in a pan like a good steak.

• Use smaller lures that don’t break the surface

• Have a popper or jig ready to cast into working fish

• The best tuna lure colours are black and purple, green and yellow and hot pink

• When fighting a big tuna, try and break its circling action

• When you get a strike while trolling, keep the boat moving forward and try for a second hook-up. Does anyone make their own salt ice out...
FS: Original bluefin tuna oil painting