When you cast out into the ocean in search of snapper, kahawai, trevally and gurnard, they may or may not be there waiting for you. Veteran surfcaster Gary Kemsley suggests there is another contender in the beach fishing game, and they will be there regardless of the conditions…

If no one told you, I doubt you would know they were there, yet lemonfish can be found all around the New Zealand coastline. They go by several names and different areas use their own. In the South Island they are known as rig, which is also their common commercial name down south at least. If you find one for sale in a Hawkes Bay supermarket or fish shop, however, it will usually be called lemonfish.

They have a history with the fish and chip trade and that may well be where the lemonfish name came from. Talk to a fisheries expert or a studious angler and they will call them spotted smooth hounds (mustelus lenticulatus). These fish are not to be confused with the lemon shark of tropical seas.

They are a pretty fish – very shark-like with a spotted back. They also don’t have any spines like their far less desirable stablemates, the spiney dogfish.

Lemonfish do not have any teeth but rather a pair of hard bony plates that they use to crush their favourite prey – the paddle crabs that are common on our sandy beaches, and wayward fingers of course. They appear on our beaches in a range of sizes. Here in Hawkes Bay, an average lemonfish would measure 90cm and weigh in around 2kg. They seem to differ in size from one year to another. The record for the Pania Surfcasting Club based in Napier is a huge 23kg fish. It was caught in January 2001 at Whakaki Beach north of Wairoa by Dick Lash. There have been none caught near that weight for club members since. 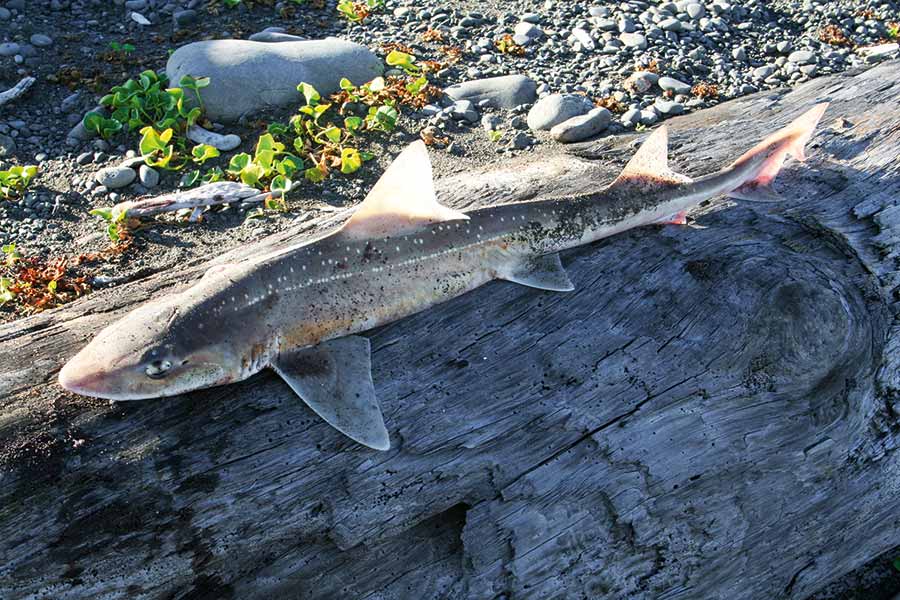 An average sized lemonfish in Hawkes Bay. Size will vary from one area to another.

They are a strong fish and even the smaller specimens will give you a fight unless you are using overly heavy gear. They live in the waves and they know how to put the pressure on an angler as they come through the surf. They love rough water and when all other species have left the surf when a big swell rolls through, the lemonfish are in their favoured conditions.

At this time, the paddle crabs become easily available to them if they have not buried themselves completely in the sand. Even then, those in close will be uncovered by the turbulence of the waves. Often lemonfish will be found in the shallows during big swells as they capitalise on the fact that paddle crabs will be disadvantaged and exposed.

Lemonfish are confident biters and take a bait well. They have a habit of picking up a bait and, as soon as they feel any restriction, run in towards shore to ease the pressure. For the surfcaster, this means that the indication of a bite is firstly just a tightening, followed by a complete slackening of the line. It is easily picked if you are constantly watching your rod, but if you miss seeing the first bite, the slack line is all you will see. Often you will get to your rod and have to reel in metres of line before you come up tight. Keep reeling though. They will be there, and may even be wallowing right in the dip on the water’s edge when you tighten up at last. Then the fireworks begin. These are strong and determined fish. Make sure your drag is set to accommodate them as they will typically streak off back to deeper water.

Once hooked up you can take your time as they generally hook up well, and short of a break off, will not get rid of the hook during a fight. I use circle hooks exclusively when targeting lemonfish these days. They suit the purpose, and almost always lip hook the fish as soon as it bites and pulls away. A single hook rig suits lemonfish, and double hook rigs can be dangerous when unhooking these twisting and squirming specimens on the beach. Hooked up to a lemonfish at Ocean Beach.

I remember catching a 9kg lemonfish one night on Mohaka Beach in northern Hawkes Bay. It was a dark, wild and windy night and we were constantly battered by a big and growing southerly swell that would ultimately have us packing up and heading home. I knew I had a good one on as soon as he grabbed it – I had been watching the tip light and saw it go down as he took off. By the time I made it to the rod, he was slowing up on a fifty-metre run. “Impressive,” I thought. “Hang on, could it be a snapper?” No, the pressure came off as he turned and ran towards shore fifty metres down the beach. He came right in through the breaking waves and doggedly held his ground just behind the dumping shore break. We had a ten-minute stalemate without much line being won or lost. Sue had a torch on him as he surfed the last few metres to the beach. We slid him out of the water and put a tape over him – 118cm.

I took a photo then rolled him over to get the hooks out. I was using a floating rig with two hooks below the float. Only the top hook was engaged, so I grabbed it and tried rolling the hook out. It did not budge but he did, twisting and thrashing, spinning and squirming. Yep, you guessed it, the loose hook went into my hand on the side of my thumb. The resulting howl of pain could be heard all the way back to Napier. 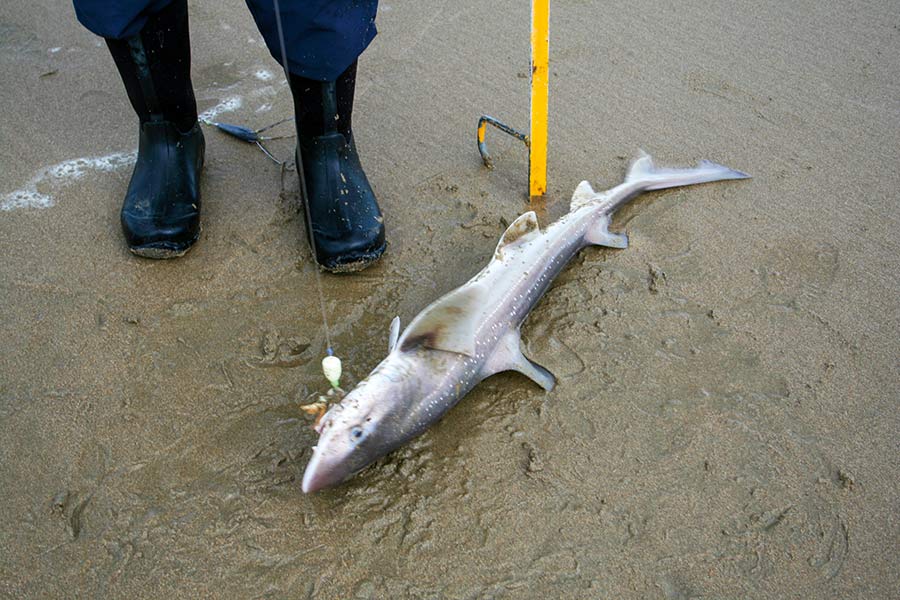 Sue brought a knife and cut the line. I was free and so was the fish. I carried it back to the water and let it go. I got a splash in the face for that.

The hook placement was such that I reckoned it would pop out with the loop method of removal. We made a loop of nylon and put it in the bend of the hook. Sue held the line and when I said pull, she put a good effort into moving the hook. At the same time, I pressed down on the back of the hook, releasing the barb. You could hear the pop as the hook came out. Whew! That was a straight point hook. I have not used that method on recurve (circle) type hooks, nor have I forgotten that fish.

One reason lemonfish are not found in every location is because they have a diet that does not include fish, octopus, squid and other popular baits. The spend their lives hunting for paddle crabs, and big or small makes little difference. They crunch their way through any they can get their lips around. Some recently popular baits like shrimps and prawns will fool them. My favourite, because it is easy to use and liked by big snapper, trevally and a host of other fish, is crayfish.

Other than that, there is not much lemonfish are interested in. That is why the pilchard brigade does not even know they are there. I can hear one or two of you now saying you caught one on a pilchard or tuna bait, but you will admit that it is a rare occurrence. You can put 999 anglers on 90 Mile Beach using pilchards and tua tuas and they will not catch any, but one angler with crab or crayfish baits can count on catching one. Here is a perfect crayfish bait to lure a lemonfish with. The attractions you can't see here are luminosity, movement, colour and size.

You get the picture? If you want to catch a lemonfish you will need to fish for it. They crave dirty, rough and turmoiled waters. Do not be put off by flotsam like branches and weed in the water – they love the cover. Two of my best competition fish were taken in a Gisborne comp when the seas were breaking to the horizon and filthy dirty. They found my baits, and at around 10kg each, took out part of the prize line up.

Some people do not recognise them for what they are – they just think they are sharks and throw them back dead or alive. If you eat fish, however, this is a very good species to target. They have no bones, just a cartilaginous backbone and skull. They fillet well (easy), and the skin just peels off.

They have a very white flesh which can be poached, deep fried, or cut into chunks for any variety of cooking technique you want to try on it. If you are going to eat one, however, you need to be careful how you look after it. They should be bled and killed straight away, then have all the fins trimmed off, the head removed, and gut cavity cleaned out and washed. Get your catch on ice as soon as you can. 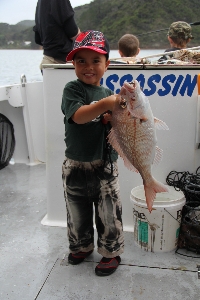