Since starting my ‘Simple Snapper Fishing’ series for NZFN, I’ve continued to experiment with stray-lining technique. Although my conclusions are based on tested theories, that doesn’t mean to say everyone agrees with me – or, more to the point, that I agree with everyone else, or even anyone else. Read on…

I’ve learned a lot in recent years about how to fish soft-baits. The first part of it was a very steep learning curve, with tackle and techniques far removed from what I was used to. Then, once I started consistently catching big snapper, I began refining specific aspects. Each good refinement brought more success.

Eventually I started wondering how my soft-bait fishing lessons could apply to stray-lining with baits – a train of thought that left the station when I realised I was ‘striking’ my fish while soft-bait fishing in the same way I do when stray-lining with baits and circle hooks. No great swinging strike, just applying pressure by lifting the rod and stopping the line from running out.

I’d always stray-lined using monofilament line, agreeing with many friends that the stretch in mono was less likely to alert a wary fish to a hungry human attached to the other end of the line. Next, I started thinking about the times a fish grabs a soft-bait on the drop, or even just sitting on the bottom, and runs away with it. How is that different from grabbing a stray-lined dead bait? In short, it isn’t.

I like the way I can instantly tell what is happening down at the bait end when soft-baiting using braided line. Surely the same would apply for straylining? And it does.

I settled on using low-profile baitcaster reels for all my soft-baiting. Overcoming the initial inertia to get the reel’s spool turning during a snapper’s snatch-and-grab takes less force than overcoming the resistance of braided line running over the lip of a fixed-spool reel; you set the hook by jamming your thumb down on the spool before putting the reel in gear. It’s all simple stuff, but takes a little finesse.

Another reason I use baitcasters when soft-baiting is for accuracy in casting. Do I need to cast accurately when stray-lining as well? You bet! I want to cast my bait and have it sink at a reasonably precise point in the berley trail – way back, but right in the thick of it. A thumb on the spool, to varying degrees, regulates just how far and fast the line goes out, here, too.

Accuracy in casting also suggests a similar approach to rod selection, with a fairly-fast-action graphite model around 2.1–2.2 metres (7’–7’3”) in length usually well-suited to the role. There is a compromise here, because the rod must be grunty enough to handle the line used, as well as the different way I fight fish from an anchored boat, in comparison to one that’s drifting.

Applying my mantra of ‘current and structure’ to stray-lining baits means fishing the same rocky, kelpy terrain in relatively shallow water as I do when chasing big snapper with soft-baits. That mandates – according to my new thinking – an equivalent line setup. That is, a braid mainline with a fluorocarbon leader: the braid for cutting through weeds and kelp, while the fluoro provides abrasion resistance against the rocks at the snapper’s end.

Also, as I’m stray-lining at anchor so cannot follow big fish (as I sometimes do when drift-fishing soft-baits), I must muscle fish to me instead. So, rather than 4kg braid, I need to use 15kg. And, to get enough line capacity for 15kg braid, I use the round, barrel-type baitcaster reels, not the low-profile ones I prefer for soft baiting. The ‘grunty’ rod I mentioned earlier is quite light compared to what many use, but is more powerful than my soft-bait rods, having 8-10kg capabilities.

I use 15kg fluorocarbon leader for both fishing methods, as it serves exactly the same purposes in the same territory – primarily that of improved abrasion resistance, with relative inconspicuousness being the secondary consideration.

I read of other folk using up to 40kg leader for big snapper fishing, but that seems very clumsy to me; so far I’ve only been bitten off twice, each time by a shark right at the boat. (I think back to chasing snapper off the rocks 15 to 20 years ago: the terminal setup we generally used consisted of a single hook tied directly to a 10 or 15kg mainline.) 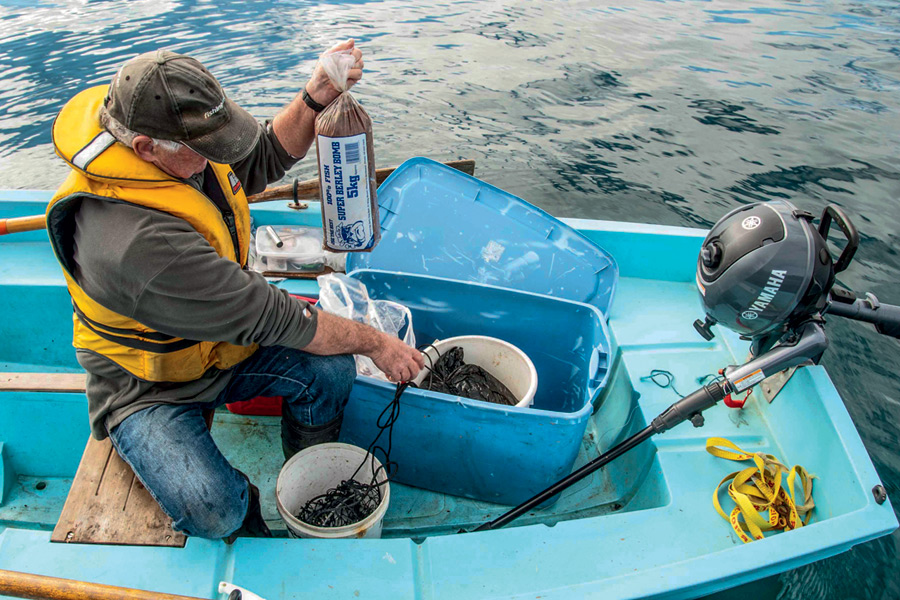 Of course, other differences set stray-lining baits apart from soft-baiting. One I mentioned earlier is that I’m fishing at anchor, not on the drift. Rather than finding the fish, I’m sending out a berley trail, attracting the fish in to me. That means lots of berley (although I guess that depends on what you consider as ‘lots’ I suppose): a 5kg block of, say, mullet and kina, supplemented by a 1kg block of oily salmon mince, does me for a morning. The extra cost of berley is offset by the fact that I don’t buy bait, instead catching what I need on a sabiki rig from the baitfish attracted by the berley trail.

Recently, I’ve made a fun discovery about that, too. I had been catching baitfish in the same way as when live-baiting: find a school of baitfish, then smash them as fast as possible so I can get moving to where I want to anchor up and do my ‘real’ fishing.

But, if I release a heap of berley, the first fish I attract are (surprise, surprise!) baitfish. So, these days, I generally catch all the bait I need while the berley trail is establishing itself. (Typically, 20 jack mackerel, slimy mackerel or yelloweyed mullet are all I need for a morning of fishing.)

This article is about stray-lining techniques, and to my mind it all fits into one system. Choosing my location affects my bait and berley choice, my line setup, and every aspect of my gear – right down to my hook and how I put the bait on it. I’ve explained the human end – the reel, rod, and line – but what about the fish end?

To start with, I’m a strong believer in using circle hooks with the barbs crushed down. Almost every fish is hooked in the corner of the mouth or the lip, and hook removal is really easy. Through exhaustive trial and error, theorising and testing, I’ve developed one method for fastening a circle hook to the leader and pinning whole dead baits to it that works particularly well. I’ve also made discoveries about hook rigging that are at odds with what lots of people advocate.

Here’s my system, along with the theories behind it – a system that runs counter to what I do when soft-baiting.

First, an explanation of why I only use whole, freshly-dead baitfish. There are three core reasons: they’re what the snapper in the area are eating anyway; they’re much more robust than the thawed frozen product (except for squid, and the only squid at my place is calamari for me, thank you); and by using whole fish with no perforations (not even the slices on the sides that many anglers advocate), the smaller fish find access and purchase much harder to achieve. Consequently, you’re well on the way to targeting the bigger snapper.

There are other advantages, too. Over the years I have found that putting a half-hitch in a fluoro leader creates a weak point in the leader. If using a robust bait, I don’t need to secure it any more than by running the hook into it.

I’ve noticed and theorised about a number of baits, including whole pilchards. For instance, you pull back after an unproductive bite to find that the pilchard’s guts have been eaten out, but the rest of the bait is untouched. The theory is that the guts are the most nutritious part of a baitfish. Then, occasionally, you’ll retrieve one and find its back has a similar sort of chunk taken out: my theory is that the ‘chomping party’ mistakenly got its meal upside down – it was still aiming for the guts. 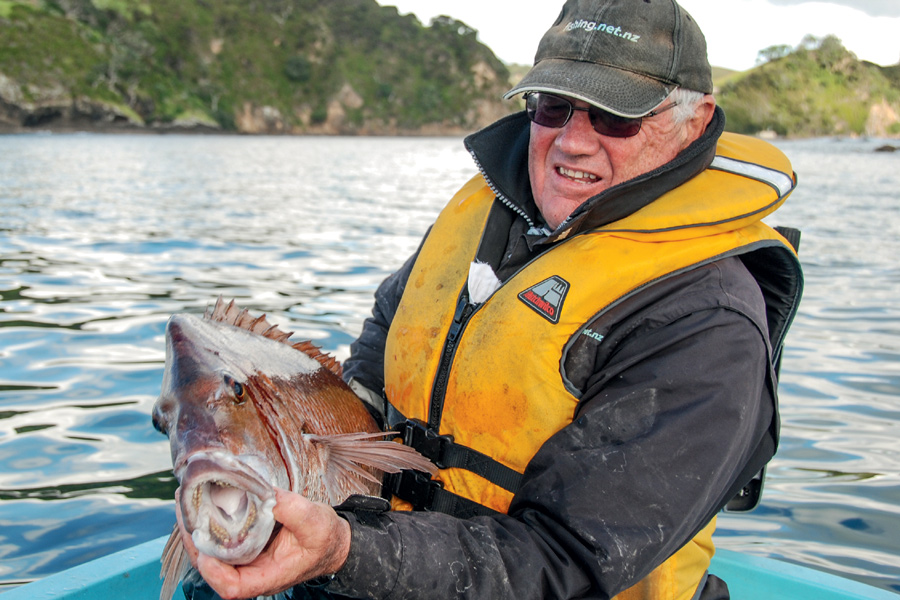 But just one hook for stray-lining? Yes, because two hooks double the chances of catching up in weeds and kelp. Anyway, a freely-sliding ‘keeper’ circle hook is useless because it cannot firmly grab.

Another discovery I made is that, unlike soft-baiting, bait movement is relatively unimportant. So, I tie the hook to the leader very tightly: for a hook with an eye that’s in line with the shank, it’s a uni-knot, and for an offset eye, a snell. The more direct and straighter the contact achieved with the hook’s point, the better your chances the hook will lodge in the fish’s mouth.

I’m not being consciously counter-intuitive in this article. It’s an honest record of what I’m doing and why. But if you want to be one of the folk who usually come home with sizeable snapper, along with pictures of even bigger ones set free, try fishing my way...

If you’re not already a member of the 20lb snapper club, your time might be running out thanks to human-induced evolution, suggests genetics student Anna Blair…... Read More >

Snapper is arguably New Zealand’s most popular sport and table fish. They are copper-pink on top with a silver-white underside and small blue dots along their... Read More >